Tales from the Dao

Down by the River

The old man sat on the muddy bank of the great river, fishing quietly and watching the water flow. He liked it here, out with the sun and the mosquitoes, his toes squishing delightfully in the mud, his bottom getting wet with the early morning dew. He didn’t mind a little dampness. He just liked sitting by the river and watching the water flow by. His line trailed out into the water, though he used no bait. Catching a fish was not important. The simple act of sitting by the river, toes in the mud, line dancing over the water, was enough for him. 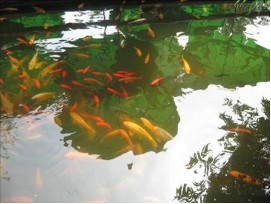 The old man had been a philosopher and student of the Way for quite some time. He knew he was not popular with certain segments of society, those pedantic logicians and the like who used words as a screen to hide behind or else brandished them like weapons. His teaching had always been a bit convoluted and full of riddles, puns and a sublime sense of the ridiculous. As for arguments with other scholars and philosophers—he just wasn’t interested. He often said that if two people argue and one wins and the other loses, does that mean one is right and the other wrong? Or are they both partly right and partly wrong? Or are both all right and also all wrong?  Waiting for final answers is like waiting for nothing, he told his students. Look at everything in relation to the great Tao and leave differing viewpoints as they are. That’s the way to live out one’s life in peace and harmony.

He knew he was often laughed at behind his back, and sometimes to his face. So what? He didn’t care! He knew what he knew and he also knew what he didn’t know and that was enough for him. Still, his fame had spread lately and he was continually being bothered by people seeking the ultimate truth, as if such a thing could ever be conceptualized and put into plain words. Besides, it wasn’t up to him to tell people the “ultimate truth.” He could only share his truth, and even that changed from day to day, just like the ongoing cycles of the seasons.

No, he was better off here by the river, alone except for the mosquitoes and an occasional bird. He loved looking at the river and thinking about the great, unfolding Way and his place in it. He had learned a lot just by sitting here and watching the water flow by. He noticed that many people’s energy flow was like water. Some people just had little trickles, like a small creek. Other’s energy was clogged and muddied, like a dammed up stream. Others’ was wild and turbulent like a river in the spring. Others’ flowed serenely along, like the great river in front of him. Still others’ flowed fast and furious like the rapids he knew were up river, then at other times it grew sluggish and heavy like the part of the river that flowed past the village downstream. The trick was to find a rhythm that suited one’s self and try to stick to that. It was far better to be harmonious and consistent than it was to change one’s flow every other day or even many times a day. He himself had been quite turbulent in his youth, but a combination of self-cultivation and suffering had changed that. Now he just liked to sit here, toes squishing, line dancing, mind empty, bottom soaking, and enjoy the day.

Suddenly he heard a commotion behind him. Two men were sliding down the muddy bank toward him. They wore the insignia of messengers for the local Lord who lived on the other side of the river, in a great castle. The old man had never seen this great Lord, since the Lord did not condescend to travel among the common people. Years ago the old man had lived in the capital and had known many such men. They were mostly a very boring and irritating crowd, their energy stuck in their feet. They were the reason he had left the capital long ago and retired to this small village by the river.

The two messengers, who wore costly robes of silk, were struggling to hold up their hems to avoid getting them muddied. They were out of breath by the time they reached the old man, who sat with his back to them.

“Honored sir,” they panted. “Are you the one they call ———?” They used an honorific title he had been given years ago at the capital in recognition of his sagehood. He thought at first of denying it but realized they already knew who he was when they first climbed down the riverbank. They were only using a formality. He knew it all so well—the empty, flowery phrases that fell from their tongues like rancid butter.

Sighing, he got up slowly and turned to face them. “Yes,” he answered. “I am that most unworthy person.” He knew how to play the game.

The two silken messengers looked at each other. Could this really be the great sage that their Lord had sent them after? Why, he looked like a ragged fisherman! Yet there was something about his direct and piercing gaze that held them for a moment, like the sun coming out from behind a cloud. Then, just as suddenly, it was gone again and the old man stood before them, idly picking his nose.

“We have been sent by the great Lord of this province to bid you come to his castle so he may humbly prostrate himself before you and beg of you to share some small part of your great wisdom with his lowly household.”

What a crock! The old man knew just what would happen if he allowed himself to be led to the castle. Hours and hours of fawning and false modesty, to be followed by days and days of being a virtual prisoner, arguing with a dim-witted nobleman who had never had an original thought in his head. He would have to deal with whatever other “sages” the noble had ensconced there to argue philosophy in front of him. All his life he had dealt with those high-minded, long-winded Confucians who confused propriety and wisdom, duty and Tao, classism and true spiritual freedom. He wanted no more to do with them.

And the logicians were even worse. How they loved to confuse and conspire with endless torrents of words—words with no spirit, no real energy behind them, words which clouded the mind and induced a narcotic, hypnotic effect that numbed the mind to the true reality of the Way. How many endless hours had he already spent trying to get them to let go of their precious concepts and opinions and open themselves to the simple, unadorned truth of the integral and eternal Way?

No, he could not stomach any more of that. He had to find a way to turn them away without incurring the wrath of their great Lord. Suddenly an idea came to him. “You have the shell of a ritual tortoise at the castle, do you not?” 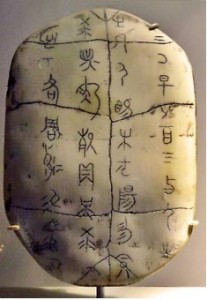 The two messengers did not know what to say. This old man was a little abrupt. They had expected him to jump at the chance to be set up in the castle. After all, he would be paid well for his efforts and he would be wearing much finer clothing than the old rags he presently wore and be enveloped in much richer surroundings than this mosquito-infested, muddy riverbank.

“Yes,” answered one of them, finally. “We do have a great and ancient tortoise shell which, as you most assuredly know, great sage, is used for divination at certain times of the year.”

The old man could imagine the pomp and circumstance of the divination ceremony: The ancient tortoise shell would be carried into the hall of divination between rows and rows of seated nobles and servants, all stiff and formal. The procession would be accompanied by the ancient sing-song music of the Confucians, more irritating and less musical than the whining of the mosquitoes in his ear. Endless speeches and formal testimonials would follow. At last would come the ceremonial heating of the tortoise shell; the cracks that appeared on it could then be read. Would the year in question be good or bad for the great Lord and his fief? The priests were not fools; they were not stupid enough to share bad tidings, even if they read them on the tortoise shell. The great Lord would not want to know about the floods, the many farmers going hungry, the diseases and the pestilence that would be visited upon the common people that year. No, the great Lord would want to hear how beneficent and wise he was, what a great ruler of men he was, what a generous and compassionate father to his people he was. The very thought of it made the old man want to vomit right there at the silken feet of the great Lord’s messengers.

“Well,” he said, “what do you fellows think? I can see you are intelligent men. If the tortoise himself had been given the choice between being slaughtered for his shell to be venerated for hundreds of years or to be left alone to drag his tail in the mud, what do you think the tortoise would have wanted?”

The two messengers looked at each other again. Was this some kind of test? They had been told that the old man was a bit odd, some even thought him crazy. They both decided to take their time in answering, just in case. Finally one of them took a deep breath and spoke. “I suppose,” he said slowly, “that if it were truly up to the tortoise, why of course he would rather have been left alone to, as you say, drag his tail through the mud.”

“Then that is precisely what I intend to do with mine,” said the old man and abruptly turned his back on them, his muddy bottom winking obscenely. He gathered up his fishing line and trudged down the bank, singing an old folk song at the top of his lungs.

The messengers watched him for some time as he walked slowly away. What would they say to the great Lord? They were not even sure themselves what had just happened. To think they had walked all this way and gotten muddy and mosquito bitten for this! It was true, they would tell their Lord, the old man was crazy, not a sage, not a wise man. Just a crazy old man sitting on his ass in the mud. 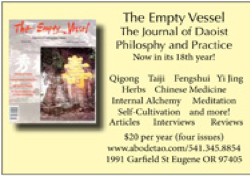 Reprinted with permission from Tales of the Tao by Solala Towler

This entry was posted in Tales from the Dao and tagged down by the river, Solala Towler, tales of the tao. Bookmark the permalink.