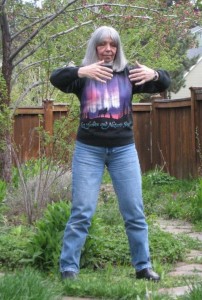 When you think of the word merging, I’ll bet your first thought is of driving, turning onto the highway on ramp and adjusting your speed to allow yourself to smoothly join the flow of cars, trucks, and buses on the highway. It takes careful observation, a sense of timing, flexibility, and knowing just when to act and when to coast and when to surge forward. Ultimately you achieve your goal: you become One with the river of traffic. Success!

The concept of merging can be applied to achievement of Oneness with much more than just traffic as this writing by Deng Ming-Dao suggests:

“Take the sun. Put it in your heart.

Take the moon. Put in to your belly.

Draw down the Big Dipper.

Merge with the Northern Star.

“We have gone from distant views of gods to a more inner-oriented one. In the past, our relationship was viewed vertically. People were in a subordinate position and the gods were supreme. Without much effort, we can see that this point of view was a reflection of feudalistic definitions and childlike emotions.

“By contrast, those who follow Dao declare that gods do not exist.

“To think this blasphemous is to miss the point. Rather, those who follow Dao seek a relationship with the divine in which there is no division. They are seeking a state of oneness.

“If people are one with their god, then it stands to reason that there is no division between them. If there is no division between them, then they are god and god is them. This doesn’t mean that a person can do all the things that gods are supposedly able to do. Instead, they attain a state of being and understanding where there are no distinctions, fears, or uncertainties about what is divine.

“That is why we sometimes contemplate bringing the stars into our very being. We want to merge with Tao. In essence, we become Tao and Tao becomes us.”

The opening verse can be considered in so many ways; symbolically, literally, energetically, spiritually, mundanely.

On a purely worldly level, these heavenly bodies contribute to your physical wellness. Absorbing sunlight allows your body to make the vital Vitamin D you require to be healthy, and those of us in the northern hemisphere at this time of year need all the sunlight we can get! Following moon cycles contributes to reproductive energies and determining when are the best days to become pregnant if you are trying to conceive a child. The Big Dipper is a seasonal indicator, the handle pointing in the evening toward the cardinal direction of the season (east in spring, south in summer, west in autumn, north in winter) and helps with knowing when to both plant and harvest foods. Fruits and vegetables grown locally and eaten fresh as they mature in their season have more and better nutrients than processed foods, and foods that must travel a distance to your supermarket often leave their nutrients along the road as they travel.

Mentally and energetically, the sun represents yang energies, the moon represents yin energies, and the Big Dipper represents the cycles of change from yang to yin back to yang, etc. The Northern Star is the pivot point around which all else revolves. This knowledge may be applied to any and every aspect of life since every aspect has two points, is in constant change, and revolves around a central point. Try using this as a model for decision-making the next time you need to make an important choice in a matter. See if you don’t just find yourself merging into harmony with all the other matters on your highway of life.

Spiritually, keep an eye on the handle of the Big Dipper in order to know when to practice seasonal breathing routines to help you eliminate disease. Consider this excerpt from the book Qi Gong Therapy: The Chinese Art of Healing With Energy by Tzu Kuo Shih, Station Hill Press, Barrytown NY, 1994, p. 14-15:

“Exhaling with mouth not open can improve the sight and soothe the liver in spring. Exhaling with the mouth open wide, in spring, can clear away the heart-fire. Exhaling with the mouth open but teeth clenched in autumn, can astringe the lung and relieve cough and asthma. Exhaling can reinforce the kidney. Producing the sound “shee—” can eliminate restlessness and fever of deficiency type of San-jiao [triple burner]. Rapid exhalation can reinforce the spleen and promote digestion.”

For more information on breathing techniques for wellness, see the article “Three Ancient Qigong practitioners on breathing” at http://bewellqigong.blogspot.com/2008/04/three-ancient-qigong-practitioners-on.html

Additionally, there are advanced spiritual breathing practices, and you may learn more about those in the article “Six Breathing Practices” at http://bewellqigong.blogspot.com/2008/07/six-breathing-practices.html

Contemplating and meditating upon Daodejing verse 34 (this translation by Steven Mitchell), you may gain further insight into how merging leads to harmony with universal energies and, ultimately, Oneness.

The great Tao flows everywhere.
All things are born from it,
﻿yet it doesn’t create them.
It pours itself into its work,
yet it makes no claim.
It nourishes infinite worlds,
yet it doesn’t hold on to them.
Since it is merged with all things
and hidden in their hearts,
it can be called humble.
Since all things vanish into it
and it alone endures,
it can be called great.
It isn’t aware of its greatness;
thus it is truly great.

No doubt you have some great ideas already. If you need a little nudge, here are some of my thoughts to get you started on the path to your own insights.

Everything, from the smallest blade of grass emerging from the soil to the furthest star we cannot see even with the most advanced astronomical equipment, experiences cycles of change.

All things are born from it,

yet it doesn’t create them.

Just as Necessity is the Mother of Invention, Necessity does not give birth to the solution, the Invention itself fulfills that role. Change is like Necessity; the strongest dam won’t contain the flow for long. The choices and decisions you make in light of Change are the Mother of your personal Inventions, and your solutions add to the flow of life-improving harmony.

It pours itself into its work,

yet it makes no claim.

Change cannot take credit for the things that come about as it happens along its way, it just follows its natural cycle.

yet it doesn’t hold on to them.

Just as Change takes no credit for the things that are nurtured by it, it is also not invested in their longevity or survival. If the time has come for a volcano to erupt, it does not wait until the flowers in the meadows have completed their blossoming, it erupts and covers the meadow with ash because that is its cycle.

Since it is merged with all things

and hidden in their hearts,

it can be called humble.

Since all things vanish into it

and it alone endures,

it can be called great.

This is a bit like the concept that nothing can outlast Time, and in a way it is the same thing. Time and Change march on; nothing can outlast them, and it is in their natures to be the never-ending but indirect source of harmony and expansion. When one thing vanishes, a new thing comes forth; when that thing vanishes, another new thing appears, in endless cycles of vanishing and appearing.

It isn’t aware of its greatness;

thus it is truly great. 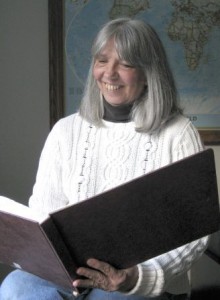 Change does not recognize its own nature, it simple flows endlessly onward. Being unaware, it never attempts to control or master anyone or anything, it simply follows its path. By following its path, it is in complete harmony and that is its greatness.

To follow the path, look into your heart, connect with spirit, and flow harmoniously with Change, you need only be observant of your surroundings and your own true Nature which is that you are part of the flow of universal energies and Consciousness.

Too many people struggle against Change, try to control everything that happens around them without being able to see or understand the flow of the universal picture and how they fit within it.

Instead, welcome Change and embrace the cycles of the days, months, and seasons, align yourself with the Sun, Moon, and the Big Dipper, revolve around the Northern Star as they do, and you will indeed merge into harmony.

[Michelle Wood holds a degree in Holistic Relaxation Therapy from Natural Health Institutes, has been a student of the Yijing since the early 1990s, and embraced the philosophy and shamanic roots of Daoism at the beginning of the 21st Century. In addition to being a counselor for a weekly grief-recovery and transitions group, she leads discussions on Daoist principles for the online community at FindingAnswers.info. She offers meditation and qigong classes and workshops both privately and through Central Oregon Community College. Participation in kirtan, Indian devotional singing, for many months led Michelle to study the archetypal vibrations found in Sanskrit mantras and chants. The practice of Toning – or making sounds – activates your cells, stimulates the energy of the inner self, and unites your consciousness with your unconsciousness. So excited by the prospect of sharing this technique to achieve joy and health through vocalization and vibration, she is developing a wellness program utilizing the phrases, tones and vibrations found in Sanskrit bhajans (devotional songs). Email: bewellwithmichelle@gmail.com Website: http://bewellwithmichelle.blogspot.com/ ]

This entry was posted in Illuminating the Dao and tagged be well with Michelle, merging into harmony, Michelle Wood. Bookmark the permalink.