Michael Chritton of Swanee, Kansas, is a Chen Village (Chenjiajou) certified Taiji instructor. In mid October, he posted a status on Facebook (FB) and “whined” about his grueling training with his wife Master Chen Huixian. Michael normally uses 20 minutes to complete one set of Chen Style Old Frame Routine One (Lao Jia Yi Lu). For a training experiment, Michael made his movements slow and completed it in 30 minutes. Right away, he got lots of feedback. Others posted similar experiences when they practiced a form very slowly. This gave Kimberly Ivy, a 20th generation disciple of Grandmaster Chen Xiaowang and founder of Embrace The Moon in Seattle, Washington, a fun idea. She started a FB group named The potentially famous 2010 Laojia Training Experiment and invited some of her Facebook friends to join the experiment in which the participants will do Lao Jia Yi Lu at a slow pace for a week and at a fast pace for a week and compare the results. 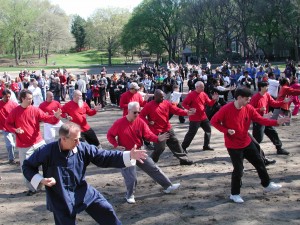 Kim wanted to provide an open “safe” place for friends to exchange ideas and personal experience so she made the group private but group members can invite friends to join. The FB group was created in late October. The experiment started on Nov. 14 and ended on Nov. 28. At the highest, there were 77 members.

Chen Style Lao Jia Yi Lu is the foundation of all modern Taiji styles. Its extended form is practiced with a high/medium stance and some advanced practitioners prefer it to be low. According to Master Chen Huixian, for an advanced practitioner, a normal pace is about 12 to 18 minutes long. Anything beyond 18 minutes is considered slow and a fast pace practice is about 10 minutes or less, though some did it in 7 or 8 minutes. Of course, beginners find it hard to do the form longer than 10 minutes simply because their leg muscles are not strong enough to sustain a longer practice without missing too many details.

Most of the Experiment members are advanced Chen Style practitioners; many are Taiji instructors; a few also practice Yang Style Taiji, Bagua or external/internal martial arts. They are located in different parts of the U.S.; a few joined the group from Brazil: one person was from the Great Britain, Malaysia, and China. Over two dozen members shared their experimental results. Some brought the experiment to their own Taiji classes and tried it out. In general, the experiment turned out to be a success for many reasons.

One member wrote, “Going slower revealed even more to me about the deep connections not just with my body, but with the interrelationships with my (Taiji) partners, and increased my capacity to ‘hear’ what was going on.” One described that during the slow practice, Qi was moving very fast. Dan Tian continued to move like a gyration ball even after the form practice. The other attributed to the Qi flowing smoothly in her body during the practice and did not need her knee brace at all. Others commented that the slow experience not only helped them with Lao Jia Yi Lu practice, but also helped them with other styles or forms. One member utilized the slow approach with a Yang Style class (24 Movements in 24 minutes!) and the feedback was extremely favorable from the entire class regardless of their Taiji level.

Some reported negative results as well when doing the form slow such as burning legs. Some had to alter breathing pattern to accommodate the slowness, which felt unnatural. A couple members recalled that their mind started to wander, especially when they were tired. Master Chen Huixian comments that practicing slow has many benefits but it should be a gradual process. She urges practitioners not to intentionally draw out the breathing unnaturally or hold the breath too long. She suggests practitioners slowly increase their form time as they progress, i.e. increasing the form time by a 2-minute increment each week.

It became interesting when the experiment went from slow to fast. Kim’s suggestion was to do the training at the speed of 15 minutes. A few ventured to do it less than 10 minutes. In most part, there was an adjustment issue. After all, it is quite different to breathe fast than slow. Some expressed there was not enough time to move the Qi around the body or to sink it. Some discovered they could not properly shift the body weight to distinguish the Yin and Yang. The movement expression was getting “sloppy” and details were lost. One person said that he lost his place in the form when doing the form too fast. One member simply cried out that “things seem to fall apart and my form feels uncomfortable.”

Was it really the problem of doing it fast? Was it a natural outcome of changing pace drastically? Or was it simply because during the slow training, people learned the nuances of Lao Jia Yi Lu and now they realize what is missing when they speed up the practice? During the slow training, one member set Grandmaster Chen Xiaowang’s DVD to a slow pace of 40 minutes and watched it while practicing. All members who posted about slow training admitted that they learned a lot more about the form. “Working slowly makes mistakes visible, working fast makes them tragically obvious,” concluded one member.

Many stated that the slow training helped them with their faster practice. One person commented “moving fast through Lao Jia felt very connected even at the break-neck speed. It felt like mercury flowing.”

One member quoted a master’s saying that “if you can do it slow, you can do it fast” which sparkled a little friendly debate. But there is one thing that most can agree on, is that “one cannot do it fast if he cannot do it slow.” Some practice Taiji for health reasons while others for the martial arts thrill. People who enjoyed martial arts more expressed the preference for fast training.

This experiment was not conducted in a controlled environment. There were many factors that could impact the outcome of the results, such as weather. Due to an individual’s Taiji level, the result could be different. In general, it is hard to tell whether practicing a particular form fast or slow is better. However, the experiment was valuable and illustrated that the difficulties of doing a form either really slow or really fast. The discoveries from both paces can help people improve their form practice.

Aside from the benefits of the improving their understanding of Taiji principles, Lao Jia Yi Lu and their own practice, members built camaraderie among Taiji lovers beyond the geographic boundary. They encouraged and inspired others to practice. Many shared their thoughts and learning. Some quoted various master’s teaching. There were over 20,000 words posted in about six weeks. Some posted a photo of their practicing spot (some in snow and some in sun shine). They exchanged information of how to protect their knees as well self-taping (the practice) techniques. It was a virtual group. No wonder, after the experiment, 69 members still remain in the group and continue to exchange ideas.

One member described Taiji practice is like “a string of pearls”. This metaphor can be used for this group of people who are proficient at their practice and selflessly offer their experience and knowledge with other. Hopefully, similar FB groups will be inspired or a scientific research can be established to do a control study on practicing Taiji fast and slow.

[Violet Li is an award winning journalist, certified Taiji (Tai Chi) instructor, and certified Heart Zone Trainer. She has studied Tai Chi, Qigong and heart fitness with many grandmasters and experts. She has taught Taichi, Qigong and other fitness programs to different demographic groups. NBC of St. Louis featured one of her classes in “100 Year Old Tai Chi Artist”. Her passion for Tai Chi, Qigong and fitness motivates her to write articles on the related events, people, theories, techniques, practices, and health benefits for you. Violet writes regularly for St. Louis Tai Chi Examiner and National Tai Chi Examiner with readership from over 18 different countries. Do you have a story or comment to share? Please contact her at violet.li@tadi.com.]