Wu wei is a Daoism term. It can be translated as non-doing. Even though wu wei is not as glamourous as enlightenment, a word much loved by the Zen practitioners, it’s good enough for taiji and qigong practitioners.

While enlightenment is easy to understand (but difficult to achieve), wu wei is not. It is not easy to cultivate something that you don’t have a clear idea of what it is.

Here is my interpretation of wu wei:

The Chinese character “wei” means action with a purpo 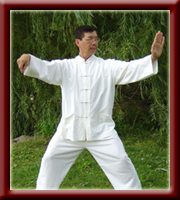 se, or to do something. The word “wu” means no, non or without. Wu wei together means without action, or non-doing. Wu wei is difficult to explain because it is a Daoism and Chinese concept. It doesn’t mean “not to do” or “don’t do it”. In fact, it can be explained as to do something so naturally and effortlessly as if you’re not doing it.

The word “you” means to have, or to own. “You wei” means to pursue something actively, or to have some outstanding achievement. It generally means worldly achievements such as money, fame and skill. You wei is a positive term and a compliment to anybody. We can translate it as “doing”.

You Wei vs. Wu Wei

Many people think that “you wei”- doing, is the opposite of “wu wei” non-doing. They chase after “wu wei” and avoid “you wei” thinking they are on the right path towards the Dao. But according to my understanding, this is not true.

Let’s take the example of taijiquan (tai chi chuan) training. At the beginning, you learn the basic stances and hand moves; then you learn the taiji form, the body-structures and the applications, etc. You are learning to increase your knowledge of taiji. You have to work hard both mentally and physically, paying great attention to the details. You may have to learn for 2 to 3 years until you can get things right. But you should understand that all these hard trainings, all these careful studies are actually “you wei” in nature. Think about it. You are increasing your knowledge of taiji. And you are working hard mentally and physically on your forms and push-hand. Is this  not “you wei”?

After you have developed a strong jin (energy), and your taiji forms are looking good, you are still at the mid level. You have finished only half of the circle, which is the level of “you wei”. Now you are ready to begin the training of “wu wei”, the other half of the circle. This is where the real taiji training begins.

The key of this training is to decrease, to cut down and  to use less. You need to use less physical force but maintain the same motion. Use more yi (intention) to perform the form; cut back on physical strength. Try to be as soft and gentle as possible. Sometimes it takes  several thousand form repetitions to reach this goal. Then you should try to use less yi (mind) while practicing the form. Because focusing too much on yi can create tension in the mind. Using less yi gives you space to think. In the art of taiji, less is always better. It gives you room to move, in other words, freedom! After lots of using less yi you will reach the stage of practicing taiji forms with your intuition. Then everything will become effortless. You can follow the rules but still be completely free. This is called “wei wu wei” – do the non-doing. The Dao De Jin said, “Do the non-doing and there’s nothing you can’t do.” At this point you have completed the other half of the circle.

What are the examples of people who have achieved the “wu wei” level? Well, nowadays you can check out the taiji postings on you-tube. But beware of the fake masters. Great taiji masters always perform in a soft and gentle manner. Their applications should appear to be effortless, at times even seem to be quite weak.

Observe Fred Astair in his dancing performance and you can see that no matter how complicated and difficult the moves, he is always at ease, his steps light and nimble. Watch Jimmy Hendrix playing his guitar and you can understand what is “wei wu wei” – or do the non-doing. Hendrix played his best songs as if he’s not ever touching his guitar; you can almost feel the freedom. Those are the true masters of “wu wei”.

If you are not free, you haven’t reach “wu wei”. And if you want to attain “wu wei”, you must first attain “you wei”.

[Master Chun Man Sit was born in 1951 in southern China. His family moved to Hong Kong when he was six. He lived in Hong Kong for twenty years. In 1976 he moved to the United State. He lives in Overland Park, Ks. with his wife Mary Ann.   Master Sit began his martial art training in 1969. He has learned and practiced continually for forty years, learning many styles, such as: Karate, Tai Chi, Qigong and Kungfu. He is the expert on Wu style Taiji, Tai Hui Six Elbows Kungfu, and many Qigong methods, including 6 Healing Sounds, Drifting Cloud Moving Qigong, Nei Gong, Silk-reeling Gong, etc.    Master Sit has been a chief judge in many national Tai Chi and Kungfu tournaments in the USA for the last 18 years. He has taught workshops on Tai Chi, Qingong and Kungfu. His articles appear regularly in Tai Chi and Kungfu magazines. He is currently writing a book on Tai Chi.]
Do you like this? Please share it:
Tweet

This entry was posted in From the Master and tagged chun man sit, daoism, taiji, wu wei, yue wei. Bookmark the permalink.

One Response to From You Wei to Wu Wei