In the nineteenth century, most scientists and physicists believed the entire universe was covered with a fixed, invisible substance called the ether, or the “luminiferous ether”, indicating that it was the bearer of light waves.

After the speed of light was discovered to be 300,000 kilometers per second, many scientists tried to solve the mystery of the ether.

The logic was quite solid: if there was ether, the movement of the earth must create a kind of “ether wind”. They would use the speed of light and the movement of the Earth to prove the “ether wind”. Many physicists tried and they all failed. The most famous experiment to find the ether wind was done by two scientists: Michelson and Morley. Michelson, who discovered the speed of light, was confident that they would find this wind of ether.

At the same time, while working as a clerk in the Swiss patent office, Albert Einstein used whatever free time he had to think about the universe and time. Then he wrote a paper called the special theory of relativity, which changed the way we looked at the world forever. He was young and quite bold.

“The reason Michelson and Morley could not detect an ether wind,” said Einstein, “is because there is no ether wind.” It is that simple! 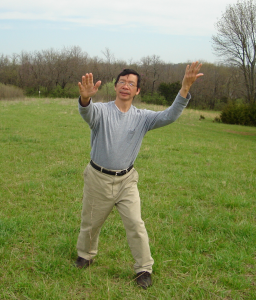 All serious Taiji students have heard of the mysterious jin, or nei jin. It is the holy grail of taijiquan. All taiji masters have this jin, or so they claim.

According to the commonly accepted Taiji theory, there are two kinds of forces. The first force is called li, which is what we have before we learn taiji. The second force is called jin, which must be learned and acquired, preferably from a famous taiji master.  Like a caterpillar metamorphoses into a butterfly, we learn Taiji and somehow change our force from li into jin.

Here are some traditional sayings about the differences between li and jin:

There are many more similar ideas. They all seem wonderful at first glance. But after forty years of practice and research, I find some of those ideas are simply ridiculous. Li is square. What does it means? How does anyone try to prove this in a scientific way? Or should we assume that taijiquan is above the laws of physics?

In a famous Taiji book “Taijiquan and Self-defense” by Chen Gong, the author listed 35 kinds of jins. Then he tried to explain 25 of those jins. According to Chen, all these jins were difficult to achieve; and each one was harder to acquire than the previous one.

What about “The Dao is simple”, and “Taiji is just one yin and one yang.”?

In a fighting situation, we must make split-second decisions, how can we choose one jin out of thirty-five quickly?  For me, I’m lucky if I can remember the names of the 35 jins., not to mention choosing the right one within half a second.

Master Wang, the founder of Yi Chuan, said, “In a fight, if you have to think and then respond, you are too late.” If your timing is wrong, nothing will work.

What is li and jin?

Li and jin are one and the same. They have the same substance, like water and ice. Water is melted ice and ice is frozen water. The secret lies in the temperature.

As for li and jin, li is frozen jin, and jin is moving li. The secret lies in the velocity of the motion.

To put it simply: li is tension and jin is motion.

Fa-jin is a ballistic motion. The principle is simple: mass times velocity. The faster your fist hits the opponent, the greater the impact.

Speed is more important than mass because when you double the speed, you’ll have four times the impact force. Triple it and you’ll have nine times.

When you double the mass, you only have twice the impact. Plus a bigger mass needs more force to move. In other words, a heavy object moves slower than a light object.

A bullet can kill because of its tremendous speed. It can be so fast because it is small. The same bullet becomes harmless if it travels at 10 miles per hour. The ancient masters knew about this. The Taiji classic says, “Fajin is like shooting an arrow.”  This clearly means that fa-jin is a ballistic motion.

So the main thing we have to focus on fajin is speed. The rest is just icing on the cake.

If you are still not convinced, let me cite two modern Taiji masters’ sayings:

If you double the speed, you’ll have four times the impact power.

Both Master Chen and Master Cheng are famous for their real fighting ability. Maybe we should listen to their advice. It has helped me to improve my skill greatly.

There is no jin; only mass times speed.

The jin theory was created in the old days to help us understand the motion of taiji. It was a good theory then. Nowadays we have better theories. We have Isaac Newton’s law of gravity and his three laws of motion.

The Taiji classic saying, “Use yi/intention, don’t use li/force” is a correct way to move, according to Newton’s first law of motion.

First Law:   Bodies move in a straight line with a uniform speed; or remain stationary, unless a force acts to change their speed or direction.

The key point is this:

Force does not cause motion; force causes changes in motion.

If you really understand this, you will understand that a good fajin uses very little force. Instead, it uses inertia. For example, after you shoot the arrow, it goes by itself because of inertia. You don’t have to do a thing. In fact, if you do something to the arrow, you will change its motion.

Here’s fajin is a nutshell:

There is no mystery in learning fajin. Fajin is not difficult; to do it faster than your opponent is difficult.

And you may not believe this: if you can punch faster than a taiji master, you can defeat him.

In fighting, the one with speed and power is the king; and speed is power!

(End of part one) 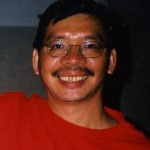 [Chun Man Sit – born in 1950s in southern China, his family moved to Hong Kong when he was six years old. He lived in Hong Kong for twenty years and in 1976, he moved to the United States. Master Sit began his martial arts training in 1969 and has studied and practiced continually for forty years; learning many styles such as Karate, Tai Chi, Qigong and Kungfu. He is the expert on Wu style Taiji, Tai Hui Six Elbows Kungfu, and many Qigong methods, including 6 Healing Sounds, Drifting Cloud Moving Qigong, Nei Gong, Silk-reeling Gong, etc. Master Sit has been a chief judge in many national Tai Chi and Kungfu tournaments in the United States of America for the last 18 years and has taught Tai Chi, Qigong, and Kungfu workshops. His articles appear regularly in Tai Chi and Kungfu magazines and he is currently writing a book on Tai Chi. Master Sit and his wife Mary Ann, live in Overland Park, Kansas.]
Do you like this? Please share it:
Tweet

This entry was posted in From the Master and tagged jin, science, taichi, taiji. Bookmark the permalink.