[Methods of Self Healing] The entire book, which can easily be printed on less than two pages, starts with the goddess Shakti asking her husband, Lord Shiva, about the nature of reality and how this truth can be experienced within one’s being.  In answer to her question, Lord Shiva describes 112 different meditation techniques that will lead the seeker to this experience of truth.

The first technique that Shiva describes is the most well known.  It involves focusing on the fraction of a moment that occurs in the space between inhalation and exhalation, and vice versa.

You see, all of existence is composed of three energy states: positive, negative, and zero.  These three states exist in a dynamic interplay so that reality as we know it can function.  Instead of positive, negative, and zero, a physicist will express this as proton (positive), electron (negative), and neutron (zero).  In Hinduism this is expressed in the trinity of Gods known as Brahma the Creator (positive), Shiva the Destroyer (negative), and Vishnu the Preserver (zero).  In Taoist thought this is expressed as Yang (positive), Yin (negative), and Emptiness (zero), and so on…

In the act of breathing, which is the most fundamental aspect of life, we also see this three fold interplay of energy states in the form of exhalation (positive/yang), inhalation (negative/yin), and the zero point (the point between the previous two, the emptiness state).  When you are breathing out, your entire being becomes positively charged in a yang state.  When you are breathing in, you become negatively charged in a yin state.  The point between the two breaths is where you receive a brief glimpse into the zero point, the state of emptiness sought after by students of Zen, Taoism, Vedanta, and other spiritual disciplines.

All spiritual and metaphysical traditions place great emphasis on this zero point, the point between the polar opposites of yin and yang.  It is at the zero point that one can realize his true nature as being neither good nor bad, but a manifestation of emptiness.  It is at this zero point that thinking ceases and pure awareness flourishes.  The process of thought cannot exist without concepts, labels, and the reference points of positive and negative.  Because we are devoid of the dualistic energy needed to fuel these reference points during the zero point, we become pure emptiness during this split second between the breaths.

It is at this zero point that you become a blank slate.  It is from this blank slate that the nature of the next moment can be shaped and determined.

An entire spiritual practice can be built upon simply paying attention to the zero point between the breaths.  Guatam Buddha’s own meditation practice centered around this first technique described by Lord Shiva.  This practice became known as Anapanasati Yoga in the Buddhist tradition, but many people are unaware that Guatam Buddha was introduced to this technique during his upbringing as a Hindu prince.  The Hindu text from which this technique was taken from, the Vigyan Bhairav Tantra, predates the birth of Guatam Buddha by over 2,000 years.

Application of the Zero Point in Energy Healing 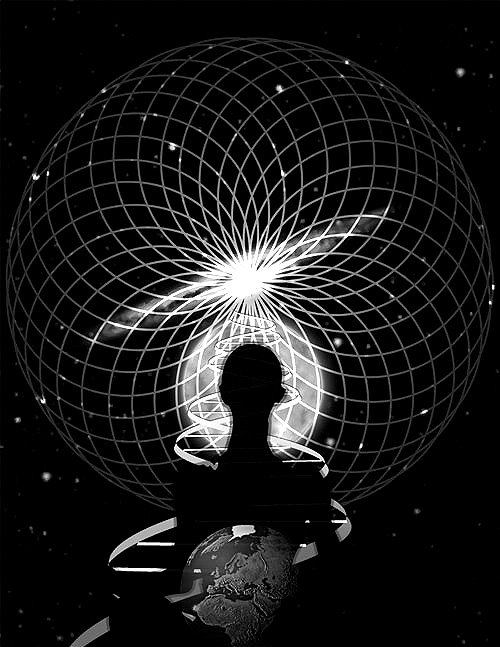 One of my students noticed that I frequently ask patients to take deliberate deep breaths while I am performing treatments.  Right after I perform a healing technique (either with acupuncture or Medical Qigong) I’ll often tell the patient to take a deep breath, and then ask them to see if their pain or discomfort is still there.  Usually the problem is relieved right after this deep breath is taken.

Experienced energy healers note that when a patient is engrossed in thoughts that are running a mile per minute, it is much harder to give an effective treatment.  When the patient is lying on the table and their thoughts are filled with doubt, anxiety, and repetitive mental dialogue the healer will almost always pick up on it…and it can be very distracting for both parties.

Some healers will give the patient instructions to clear their mind and perform progressive relaxation, and this is a very effective technique; but I’d like to offer another method that I think is just as effective and much more time efficient.

Remember that it is during the zero point of the breath that the patient is in a state of pure awareness and empty of thoughts.  As brief as this moment may be between the states of yang/exhalation and yin/inhalation it is still there.  It is during this zero point in the patient’s breathing that his energetic resistance in the form of thoughts is weakened and the healer can most effectively channel his intent into the patient.

By the time most patients come to see an alternative practitioner such as an acupuncturist or energy healer, they have exhausted all other options and are in a state of desperation and anxiety.  Most people are not familiar with acupuncture and energy healing and that lack of familiarity can breed fear during the first appointment.  Added to this is the skepticism and distrust that our society has towards alternative medicine in general.  These elements will create a patient that is nervous and filled with anxious thoughts during the treatment.  But no matter how nervous, desperate, or fearful the patient is…the zero point of the breath will still be there.

You can avoid wasting time and overtaxing your own energy reserves by carefully channeling your energy into the patient during the zero point of their breath.  When I ask a patient to take a breath in, it forces them to focus on the inhalation and thus decrease the intensity of their thoughts.  While I listen to the sound of their inhalation it allows me to predict when the zero point of the breath is coming.  It is during this brief zero point that I fully channel my energy, intent, and visualization of mind into the patient’s energy field (either through my hands, eyes, breath, or an acupuncture needle).

In my own practice, I will ask the patient to take a deep breath while I am inserting a needle into an acupuncture point or performing an energy healing technique.  After a few applications of this zero point technique even the most anxious or defensive patient will relax and allow himself to absorb the treatment.  At this point I stop asking the patient to take deep breaths and simply pay attention to their breath rhythm by either listening to their breath or watching the rise and fall of their abdomen.  I keep a state of “no-mind” or empty awareness while they are breathing in or out, and perform the energy adjustment needed during the zero point.

I’ve found that when I use the zero point as an entrance into the patient’s energy field, the patient is able to process the effect of the treatment more efficiently because their resistance is down during the zero point.  By using the zero point I am able to effect drastic changes in the person’s energy system in just a few seconds rather than over the course of several minutes or even several appointments.  Another benefit to applying the zero point is that a fraction of the energy is required on my behalf to create changes that would require much more energy without the zero point.  This is one of the trade secrets that allow me to give anywhere from 60 to over 100 energy healing sessions per week without becoming tired or sick.

Give this technique a try and see if it doesn’t increase your effectiveness while helping you to preserve your longevity as a healer.

[Ken Andes, L.Ac, D.Ac. (RI) is a licensed acupuncturist, board certified herbalist, and medical qigong instructor.  Dr. Andes has practiced various qigong for over 14 years, and he serves as vice-president of WISH and runs a private medical practice in Suffern, NY.]

This entry was posted in Method of Self-Healing and tagged breathing, energy, meditation, zero point. Bookmark the permalink.

2 Responses to The Zero Point in Energy Healing