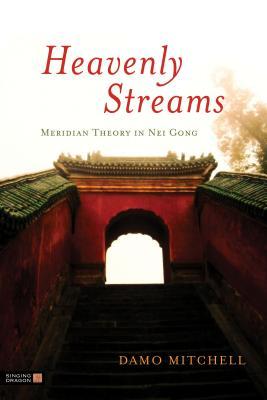 The title “Heavenly Streams” refers to the Meridians which contain streams of heavenly energy. This book should be studied by students and practitioners of Chinese internal martial arts, Chinese medicine, and all others using Meridians in their practices.

Most people, even after years of study and memorization of the Meridians, are still dissatisfied because they cannot feel, sense or see the Meridians in themselves or others.  Also, there is no modern scientific device for visualizing them.

This is one of the few books that gives a Qigong practice which allows you to feel or sense your own Meridians and Acupoints.  It also teaches you how to inject Qi into Acupoints.

This last procedure will help acupuncturists to improve their treatment.  It also paves the way for “needleless acupuncture.”  How this Qigong method is used to treat various Chinese disease patterns is also described.

Being able to sense or feel your own Meridians would dispel the nagging doubt about their existence and lend credence to one the historical ideas that the Meridians were discovered through meditation.

By profession, Dr. Eisen was a university Professor specializing in constructing mathematical models such as those in cancer chemotherapy and epilepsy. He has studied and taught Yoga, Judo, and Aikido. Dr. Eisen was the founder and chief-instructor of the Shotokan Karate Clubs at Carnegie-Mellon and Dusquene Universities and the University of Pittsburgh. He helped teach Yoga in Graterford prison. His curiousity about the relation of Qi to healing and martial arts led him to study TCM, Tai Chi and Praying Mantis Kung Fu. He was initiated as a Disciple of Master Gin Foon Mark. Dr. Eisen now teaches (at his Kwoon and by webcam), writes and researches Praying Mantis, Qigong and Yang Tai Chi - see http://home.comcast.net/~carolezak
View all posts by Martin Eisen →
This entry was posted in Book Reviews. Bookmark the permalink.