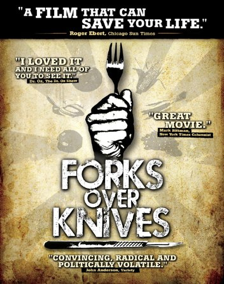 Oh WOW, is this a film to watch!  Doctors T. Colin Campbell and Caldwell B. Esselstyn present world-wide studies that support a plant based diet. Forks Over Knives show us that we can reverse or control diseases by eliminating processed and animal based food AND that by eating whole foods and a plant-based diet we can dramatically improve our health.  Research by both doctors, who independently came to these conclusions, show us that degenerative diseases like heart disease, type 2 diabetes, and even several forms of cancer, could almost always be prevented – and in many cases reversed – by adopting a whole-foods, plant-based diet.

A common misunderstanding among those interviewed in the film was that you need animal based foods for protein – it seemed as if few knew that healthy amounts of plant-based food also contain adequate amounts of protein.  The film includes a study that shows a link between diary protein and cancer.  Any of the beneficial nutrients found in milk, like calcium, are found in sufficient amounts in a healthful plant-based diet.

“Forks Over Knives” presents many research studies and very cool presentations that clearly get your attention.  A must see for those interested in improving their health!

Dr. Campbell, a nutritional scientist at Cornell University, was concerned in the late 1960’s with producing “high quality” animal protein to bring to the poor and malnourished areas of the third world. While in the Philippines, he made a life-changing discovery: the country’s wealthier children, who were consuming relatively high amounts of animal-based foods, were much more likely to get liver cancer.

Dr. Esselstyn, a top surgeon and head of the Breast Cancer Task Force at the world-renowned Cleveland Clinic, found that many of the diseases he routinely treated were virtually unknown in parts of the world where animal-based foods were rarely consumed.

The film is available on Netflix’s and on Amazon movies.  For more details about the film go to : http://www.forksoverknives.com/