Tai Chi: Increasing The Size of The Brain

Tai Chi: Increasing the Size of the Brain and Reduce the Risk of Alzheimer’s Disease 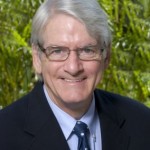 Supported by a grant from the Johnnie B. Byrd, Sr. Alzheimer’s Center & Research Institute, ProfessorJames Mortimer of University of South Florida (USF) and seven other scientists from the USF, Fudan University (Shanghai, China) and University of California-Davis completed this Randomized Controlled Trial (RCT) Changes in Brain Volume and Cognition in a Randomized Trial of Exercise and Social Interaction in a Community-Based Sample of Non-Demented Chinese Elders and reached these exciting conclusions.

MRI data collected in Shanghai were transmitted to Dr. DeCarli’s laboratory at UC-Davis 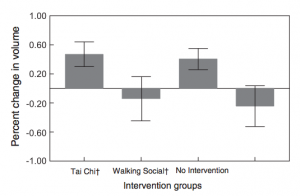 The Mattis Dementia Rating Scale is designed to measure and track mental status in adults with cognitive health.  While the No Intervention and the Walking groups had no change in this scale and Social Interaction had 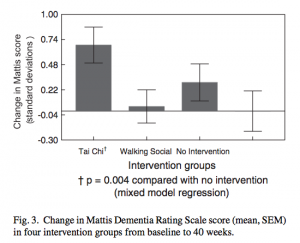 Violet Li– an award winning journalist, certified Tai Chi instructor, and certified Heart Zone Trainer, has studied Tai Chi, Qigong, and heart fitness with many grandmasters and experts, and has taught Tai Chi, Qigong, and other fitness programs to various groups. Her passion for Tai Chi, Qigong, and fitness motivates her to write articles on the related events, people, theories, techniques, practices, and health benefits for individuals. NBC of St. Louis featured one of her classes in “100 Year Old Tai Chi Artist”. Ms. Li writes regularly for the St. Louis Tai Chi Examiner and the National Tai Chi Examiner, and has readership from over 18 different countries. Do you have a story or comment to share? Please contact her at violet.li@tadi.com.
Do you like this? Please share it:
Tweet

8 Responses to Tai Chi: Increasing The Size of The Brain