Many western nutritionists mostly teach patients how to take vitamin supplements and rarely on food intake. Medical practitioners also suggest patients’ diet based on allergy history, and then patients have less and less variety of food intake and their health conditions do not improve.  So now we should bring the Eastern wisdoms to supplement what we have in Western medicine.  In traditional Chinese medicine, it says supplements through diet are more beneficial than those found in medications and it its effects have been proven for thousands of years. 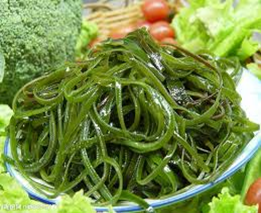 Sea weed is also called Hai Zao, or Kun Bu in Chinese medicine and has been used in medication and food therapy. Chinese medicine doctors believe that it has many benefits including balancing cholesterol, lowering blood pressure, improving mucus secretion, etc.

Sea weed has a large variety of vitamins and minerals and other nutrients including protein, fat, carbohydrates, fiber and it is one of the most important food supplements in food therapy.

S, male 36,y/o, overweight,  likes drinking alcohol and has serious acne on his face.  I prescribed a soup of sea weed and green bean once a week. After several weeks, his weight was back to normal and the acne was gone. Now, he just drinks socially and eats sea weed often and he recommends it to his family and friends.

K , 62 y/o, female, had mastectomy 10 years ago. Since surgery, she had edema over her left arm. She was looking for help from several doctors but to no avail. The circumference of the edema was twice as much as the right arm. She also suffered from pain and numbness. I suggested she use sea weed externally 20 -30 mins once or twice per day. The edema was significantly reduced and the pain was relieved after 1 week of food therapy. She started house work at home and was able to travel, something she always dreamed of doing.

D 55y/o male , he pays attention on his health and eats only vegetables most of the time. He also takes vitamin supplements and fish oils, but he suffers from constipation. I suggested he eat sea weed, to which he stated that he had never heard of before.  At the beginning, he resisted, but after he saw the effects and clear signs that his symptoms got better, he started taking sea weed regularly. He found surprisingly that his cholesterol and blood pressure were also improved.

Yuan Wang, OMD—grew up in Sichuan Province, China, where she learned to cook by helping her mother and grandmother prepare meals for the extended family. Following her interest in traditional Chinese medicine and nutrition, Dr. Wang pursued a rigorous course of study and eventually became a lecturer, researcher, and physician-in-charge of several departments at the Chengdu Traditional Chinese Medicine Hospital. Now a member of the faculty at the Pacific College of Oriental Medicine in San Diego and practitioner at The Source Chinese Medical Clinic in Poway, California, Dr. Wang finds that food tends to be a neglected area in Western medicine. Both in the clinic and in the classroom, Dr. Wang hopes to raise awareness about the importance of food for health and healing.