Observing-imagery (OI, Guan Xiang 观想) is a common meditation technique in Daoist practice. It refers to the psychological maneuvering process of keeping the mind on the imaginary objects, and sometimes, even making change of that imaginary object.  This technique is also known as mind-reach (Cun Xiang, 存想) in Qigong. 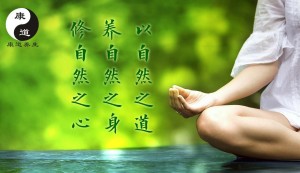 To help the practitioner gradually get into the meditation state – mindfulness, mindless, or “integrating breathing-mind-body into oneness” state,– three techniques are commonly used in adjustment of the mind —  keep the mind on (意守) (stay on one to replace all others), observing-imagination (OI), and entering tranquility (入靜).  OI is related to keeping the mind on technique, but different in some way.  The target of OI is usually imaginary while that of “keeping the mind on” is real.  They are related in terms of dispatching the mind to a target; however, OI involves imagining plus dispatching, whereas keep the mind on involves dispatching only.

The early description of OI technique may be found in the Great Peace Canon or Taiping Jing (太平经) in Han dynasty (206 BC—220AC).  The Great Peace Canon was regarded as classic works of ancient philosophical Daoism. One of important contributions it made to the Qigong development was the adoption of ‘Stay on One Method’ (守一法) and ‘Contemplating Color of Five-zang Organs’ Method (观五脏颜色法).  It held the opinion that “reflect or observe inwardly on one’s interior is the key to attaining longevity.”  The term “Mind-reach” (Cunxiang, 存想) was demonstrated in Great Peace Canon as following, “(You) empty the room, paint Five-zang organs corresponding to their color and the Qi of four seasons. Then hang it up on the window light to ponder. ”

The object of mind reach or OI is usually what the practitioners are familiar with: a situation, a phenomenon or an image they worship.  Since such objects are beyond the limits of reality, they can be things that have never existed in the world, such as legendary figures or imaginary situations.  Therefore, the scope of the objects for OI is much wider than that for “keeping the mind on,” which can virtually be anything imaginable.  Medical Qigong recorded in General Treatise on the Etiology and Symptomology of Diseases (诸病源候论) introduced the method of Contemplating Color of Five-zang Organs (存想五脏光色) to treat diseases.  OI can be used to increase physical strength, such as the imagery of pushing mountain, holding the gate of heaven, and pulling nine cattle in martial art Qigong.  The observing-imagining of caressing the ball, pressing Qi, connecting Qi, expelling diseased Qi, Qi hot as fire, Qi cold as ice, Qi piercing as sword or Qi softening like cotton, etc. in medical Qigong practice all belong to the category of OI or mind reach.

The purpose of OI is more than just “keeping the mind on.” In addition to ruling out random thoughts, OI also generates or induces a special perception for the purpose of healing or heightened spirit.  OI lays special emphasis on attaining perceptions. Without the confinement of reality, the design and choice of objects for OI can take a need for inducing specific perceptions into full account. Therefore, OI is more perception-oriented and can induce stronger sensations.

It should be noted that OI also involves the process of making-up imagery as clear as possible, and it stresses the importance of concrete image and that its imagination target is not merely an imagined subject but a target-image, which is supposed to be as real as dreams.  The ability of observing the imagery as real as dreams can be obtained through persistent training with operational skills. 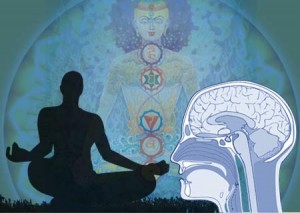 The mental state of OI can evolve in two directions. One is the preparatory maneuver to enter tranquility by replacing miscellaneous (random) thoughts with one, and then obscuring the object for mind reach. The second direction is intensifying the target instead of obscuring it to induce specific psychological and physiological effects, such as ‘mental conjuring’ in standing pile meditation and “mental conjuring the master” in Tibetan Esoteric Qigong.  For those who have practiced “Taiji Five-element Qigong”, the sections on lighting up furnace (warm up lower abdomen), gathering 5 colored energies from 5 planets through 5 senses, and bathing under the sacred waterfalls are all typical applications of OI technique.

The second direction of OI’s mental process can be further divided into four phases that can be described by using holding-ball posture in standing pile meditation (站桩) as an example. The first phase is establishing an image (Qu Xia, 取象), which involves establishing in the mind a clear image of the target for concentration or observing.  In the case of standing pile, imagine holding a thin balloon, which will break if exerted by too much force and will float away if exerted by no force.  In the case of holding balloon, the image and force should be just right so as to have the balloon stay and turn between your two arms. The second phase is purifying the image (净象), erasing the distained spots or points on the image (balloon in our case) to make the image as clear as possible. As the balloon becomes purified, so will the mind.  The third phase is rousing or moving the image (Yun Xiang, 运象), which involves bringing new life into the image, and lead it alive. For example, enlarge or deflate the balloon without changing the clarity and purity or alter the physical property of it, such as turning the balloon clockwise as fast as possible. New perceptions ensue from such alterations of the mind: holding an iron ball takes more effort than a wood ball.  The fourth phase is applying the image (Yong Xiang, 用象), which involves using the image to deal with problems.  For instance, having attained a feeling of holding an iron ball indicates the increase of strength. By this time, the force in the hand will be stronger than that at the time of holding a balloon.  In medical Qigong, we frequently use this technique or procedure to communicate with the sickness in the body, and directly get rid of sickness cloud with observing or guided imagery.

OI is also used in external qigong healing. The ability to make-up a clear image and change that image in the direction you prefer with confidence and lively process is one of key components in successful qigong healing.  When I taught qigong meditation at the addiction treatment center, one day, a client came to me to complain severe pain on her right shoulder, and she could not raise her right arm.  I asked about the context and told her to apply OI technique during the section “Sacred water washing out sickness”: imagine the pain area as if there were dark clouds, observing the waterfall washing out the cloud toward her fingertips or bottom of feet clearly until there is no dark cloud at all.  She followed my instruction. After one section of qigong meditation (25 minutes), she was so surprised that she could raise her right arm immediately without any pain…….  She could not help telling others “I am my own doctor now.”

Here I would like to share a powerful meditation with OI technique that can help lowering the blood pressure in 15 minutes.  You can share it with your friends and family to test the power of your imagination:

This meditation is designed to reduce stress and lower your blood pressure.  You can do this at anytime and anywhere.  It is best to do it twice a day, once in the morning and once at night before you go to bed.
.
Begin your meditation for hypertension by finding a comfortable place to sit and relax completely.  Sit up straight with your thighs at right angles with your body, and your calves at right angles with your thighs.  Lightly rest your hands on your lap with palms facing down.  Imagine your palms are reaching all the way down to the top of your feet [without actual physical movement.]
.
Relax completely. Lightly close your eyes and breathe naturally. Clear your mind of all thoughts. Breathe naturally.  Relax your facial muscles by raising your eyebrows a few times and smile.
.

Now, imagine it is a drizzling rainy day. You are sitting in the drizzling rain, naked; showered by the drizzle, and feeling cool and comfortable…
Move your attention gradually to the center of your palms, still imagining your palms reaching all the way down to the top of your feet.  The hot toxins in your body have been transformed into a white vapor flowing downward from your palms to your feet, and then continue to drain out of your body through the Yung-chuan, the point at the bottom of your feet, deep into the earth.
.
(Give enough time for clear and full imagery of the process)
.
Your meditation for hypertension is complete.
Briskly rub your palms together until they feel warm, and then use your palms to stroke your face a few times.  Your meditation for hypertension is now completed.
Now you are feeling pure, relaxed, and very healthy.
.
. 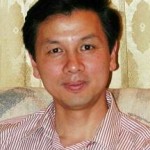 [Educated in both China and the United States, Dr. Kevin Chen has years of experience and training in blending eastern and western perspectives, and in the practice of life-nurturing methods.  As a long-time practitioner of Qigong Yang Sheng, he is one of the few scientists to have both hands-on knowledge of mind-body practice, and an active research career in mind-body medicine, which is funded through grants by the National Institutes of Health (NIH) and various foundations.  Dr. Chen devotes his life and career to the practice of Yang Sheng, and promotion of self-healing and mind-body-spirit integration]
Do you like this? Please share it:
Tweet

This entry was posted in Method of Improving Meditation and tagged meditation, observing imagery, Qi, Qigong. Bookmark the permalink.