My contribution to the book, “Daoist Body Cultivation” is a 30-page chapter on transforming sexual energy that I consider the most comprehensive essay on the topic I’ve yet written. I have excerpted it below, including my personal experience of “soul sex” or the “valley orgasm”; what Lao Tzu would describe as the opening and closing of the gates of the Mysterious Female.

Most spiritual paths dislike getting into the topic of sex, as it is invariably messy. However, 99 times out of 100, religious efforts to “transcend” sex mean avoiding or suppressing the true essence of the sexual experience. Cutting to the essence of sex is tricky due to its literally “sticky” nature. We tend to embroil our emotional  and body-as-self identity in the labyrinth of attachments that sex can create.

Excerpts from my chapter: 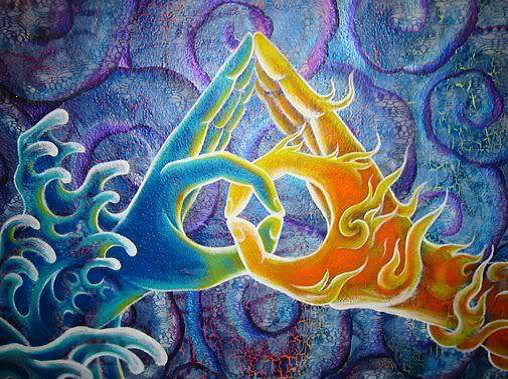 “The sexual fertility expressed in this image of a cosmic female vagina highlights the connection between cosmology and sexuality found in this famous Daoist classic (460 BCE). Nature is experienced by the sage who is in touch with the Dao as a continuous cosmic orgasm. Dao sexually births physical creation through the pulsating yin-yang process arising from original breath (yuanqi).

“Sexual love is one of the most powerful human experiences. Since ancient times, Daoists have sought to tap the power of sexuality to heal the body, deepen love relationships, and achieve elevated states of enlightenment. The Chinese texts on sexology are the oldest in the world, dating back about twenty-three hundred years (see Ruan 1991). Amongst the five major sexology texts are question and answer dialogues between the Yellow Emperor and his celestial advisors or sexual consorts on how to best cultivate sexual Qi for long life and immortality. 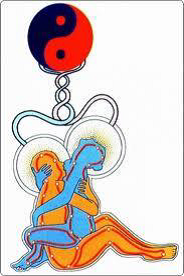 “The body-centered cosmology of these early sexology texts, and the oral traditions of different Daoist groups have led over time to a wide spectrum of sexual practices. These range from ritualized physical sexual intercourse, through celibate contemplation of sexual essences copulating within the body, to conscious subtle-body love making with a partner at a distance. Inner sexual alchemy goes one-step further – it immerses the adept in cosmic love-making, the sexually coupled polarities of nature—sun and moon, of humans sexually merging their essence with planetary and star beings.

“The notion that sexual energy is linked to eternal life at first glance seems counter-intuitive. The cycle of sexual birth and death defines human mortality. The idea that ephemeral sexual desires hold a hidden key to immortal life was codified by later Daoist schools of water-and-fire internal alchemy. Sexual essence or jingqi, is seen by them as the extremely fine spiritual substance of the soul that can be refined into the “elixir” (dan) of eternal life. Cultivating sexual essence is the human secret to realizing the workings of the impersonal Dao, the opening and closing of its “mysterious gate.”

“The most spiritual Daoist sexual practice is internal cultivation (neidan gong), literally “inner elixir skill,” popularly translated as inner alchemy. This is usually done as a solo meditative practice. The adept sexually couples his or her yin and yang essences internally as part of a lengthy process of defining energetic channels and opening up an inner body space or “cauldron.” The adept’s inner male and inner female are united within this cauldron, causing a process of spiritual rebirth. This practice is often not seen by outsiders as a sexual practice, since there is no physical sexual partner visible.

“The more rare “dual internal cultivation” practice, on the other hand, involves a pair of high-level cultivators having energetic sex (without touching) as part of their meditative practice…Here is my own experience of “soul sex”:  “Joyce and I removed our clothes. We sat cross-legged on the bed facing each other, naked. It was our intent to meditate before making love. We both did testicle or ovarian breathing and circulated the sexual energy in the orbit to harmonize our sexual feelings in our three dantian. We each smiled to our inner heart, deep in the body’s core. There was no visualization or attempt to create any experience – we were simply in a state of naked surrender to each other. In deep silence, we noticed that a new and unusual pulsation began to envelop us.

“It felt to me like a simultaneous yin and yang orgasm. The yang orgasm was my energy body pulsing with Joyce’s, expanding out in waves, which became inconceivably vast. We zoomed faster than the speed of light past planets and galaxies and then ecstatically merged into formless swirls of light and sound. The yang orgasm kept exploding out beyond our bodies.

“The yin orgasm was an equal and opposite implosion deep within our bodies. Some powerful gravitational vortex kept sucking us into a tiny point that was incredibly heavy. I could feel that Joyce was inside that point as well. I felt deeply embodied and centered within my personal self.

“The yin and yang orgasm was a marriage of sexual counter-forces. They held the space for a neutral observer in us to perfectly experience both orgasmic feelings at once. We sat in this state for half an hour, amazed and dumbfounded. It finally subsided. We fell into each other’s arms, knowing that a great and sacred mystery had been revealed to us. Our love-making was lovely and tender, but somehow anti-climatic. The shared yin-yang orgasm is what we remember; it was forever seared into our souls, and is what impelled us to marry.

“This valley orgasm permanently shifted the nature of our sexual relationship. Our subtle bodies would quickly attune and later we found we could exchange deep sexual energy for hours, lying beside each other, naked or clothed, without any physical stimulation or intercourse. It was a direct exchange of our sexed subtle bodies. As our energy bodies mingled and coupled, we were infused with loving spiritual qualities. This led to long periods of spontaneous abstention from physical intercourse that could last for many months, but with exquisitely sublime daily subtle body coitus. As our subtle bodies crystallized and became more “real”, we eventually graduated to astral sex – the ability to intentionally exchange orgasmic subtle energy at great distances.

[Michael Winn is the founder of Healing Tao University with 30 Tao summer retreats in Asheville, N.C. and is the past President of the National Qigong Association.  Michael has over 30 years experience in Taoist arts and leads an annual China Dream Trip. He has co-authored 7 books with Mantak Chia, and is also the author of 10 Qigong and Inner Alchemy home study courses, as well as a free e-book, Way of the Inner Smile. All are available on www.HealingTaoUSA.com]