Forms of Qi: Heaven Energy of the Stars (Part 5a) 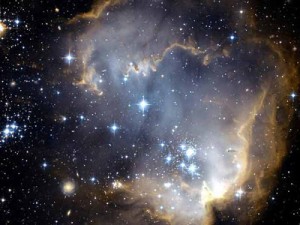 Commonly used Heaven’s Treasures, aside from the sun and moon, are the Big Dipper, Polaris, the five planets, and the 28 constellations.

The North Star (Polaris) was thought to be fixed and so was called the Divine Centerof the Earth and Sun Cycles. The North Star was the center of a circle of Heaven and the circle was divided into 4 congruent regions, each containing 7 constellations. Each region was further subdivided into 7 regions, called posts (xiu) containing a single constellation. The ancient Chinese believed that the moon traveled 28 days, from west to east, resting at each post as it circles the Earth.

The constellations revolved around the Pole Star Axis, defined by the North Star and the north and south poles of the Earth. This changing energy created the weather changes corresponding to the Five Elements. If unexpected weather changes occurred, it was thought to be the result of environmental Evil Qi.

Since 2000 B.C., Chinese Qigong masters used the movement and energy of Heaven’s Treasures and the Chinese zodiac to forecast events of state and war, and to predict weather and natural disasters. They gathered energy from the stars to unite inner energy with outer. They also believed that a person’s character and destiny is based upon the positions of the five planets and the constellations at the exact time and place of birth.

The Big Dipper rotates through 360 degrees daily, due to the Earth’s rotation, and yearly, because the Earth orbits the sun. In Qigong theory, it is thought that the Dipper is a reservoir of cosmic Qi (celestial energy), collecting Qi from all the other constellations and stars. The yearly angular rotation cycle can be divided into12 lunar months, described by the Twelve Earthly Branches and associated with a Chinese organ (See Section 5.). The beginning part of each month is the beginning of the energy cycle of that month. Facing the direction of the Big Dipper for a particular month will invigorate the practitioner’s energy. Meditations involving the Big Dipper usually follow those gathering energy from the sun and moon to further energize the body.

There are several Qigong exercises involving the Big Dipper. One involves evoking its power for protection; another consists of ascending into it and pacing its rotation, and a third gathers the stars’ essence into the body.

The energy from the Big Dipper’s stars can be used to balance the Five Agents (energies stored in the Yin organs that are linked to moral qualities). This energy can also be used for absorbing energy from the four seasons.

The stars of the Big Dipper can be visualized to descend and arrange themselves in a specific order around the practitioner’s body for protection.

The 5 planets are Jupiter, Mars, Saturn, Venus, and Mercury. They are responsible for the Yin organ energy formation during fetal development. They are used in several Qigong exercises because of their connection to color resonations in each Yin organ, as shown in Table 1. There are also Five Thrusting Channels that surround the body’s Taiji Pole and relate to a specific organ and element. These channels run vertically and are parallel to the Spleen Thrusting Channel, or the Taiji Pole, from the Bai Hui to the center of the perineum. Their positions relative to the Taiji Pole are shown in Table 1. These channels are different than the Thrusting Channel in TCM.

One meditation gathers energy from the five planets by quieting the mind, standing in a Wuji position and facing in the direction of the Big Dipper. Imagine filling each organ’s energetic color from the top of your head through the corresponding Thrusting Channel and sending it to the corresponding Orb (the organ complete system, channels and tissues). The order in which this is done is Saturn, Mars, Mercury, Venus, and Jupiter. Lead th Qi from the corresponding Orbs downward into the Lower Dantian, where it is stored. After storing the Heavenly Qi, end the meditation with the Fire Cycle (up the back and down the front) of the Microcosmic Orbit.

The astrologers of ancient China divided their sky into 31 sections or regions. The three subdivisions, which make up the north celestial pole are called the Three Enclosures. The first Enclosure is referred to as Purple Palace or Forbidden Enclosure. This section rules the northernmost area of the sky. In ancient China, this was the middle of the sky. The second is the Supreme Palace Enclosure, which lies to the east and the north of Purple Forbidden Enclosure. The third is the Supreme Palace Enclosure ruling the area to the West and South.

The remaining twenty eight regions are called the Twenty-Eight Mansions. The term hsiu (or xiu) was used for a lunar mansion. The stars marking the 28 divisions were selected for a geometrical division of the sky. The 28 lunar mansions sliced the celestial sphere into 28 sectors similar to the sections of an orange. Each Xiu is a triangular patch of the sky with vertices at Polaris and on the celestial equator. Each of the 28 sectors contained one of the lunar mansions and the width of a sector was dependant on the size of the constellation. The scheme of 28 divisions is a convenient average for measuring the motion of the moon (i.e., the sidereal month). Each lunar mansion was numbered and named for a constellation or asterism as shown in Table 2.

The Chinese sky is divided into 5 general divisions (Wu Gong) of asterisms. These corresponded traditionally to the 5 Chinese cardinal points, East, North, West, South, and Middle. The 5th cardinal point, the central (middle) region or Purple Palace), is the most important one and corresponds to the circumpolar region (i.e., surrounds the north celestial pole). The circumpolar stars were the key constellations to the lunar mansions of the hsiu (xiu). Each of the 28 equatorial divisions had a circumpolar constellation as well as an equatorial constellation. The Purple Palaceconsisted of all circumpolar stars within 40 degrees of the north celestial pole.

The hsiu (xiu) were formed into 4 equal groups (segments) or palaces (Gong) of 7 lunar mansions (in e ach Gong) which were called the Four Images. The Four Images corresponded to the 4 cardinal points in the sky and to the 4 seasons of the year. (Each of these palaces represented one of the 4 seasons.) These 4 other regions or palaces (that were called the palaces of North, East, South, and West) as well as grouping the equatorial constellations into the 4 geographical directions, also associated with an animal and a color, as indicated in Table 2.

Table 2. The Twenty-eight Constellations and Mansions

Note 1: All translations of the names of the Xiu are done literally; they may not be the true and original meaning.

Note 2: The Modern Stars are the approximate location of the Xiu on western sky maps

At night when the moon is not suitable for absorbing Qi (new moon), energy of the 28 constellations can be absorbed. There are several forms of this type of meditation. The Heavenly Five Yin Organ Meditation (Tian Wu Zang) is popular in China. To perform this meditation stand in a Wuji posture with your arms at your sides and facing Polaris and the Big Dipper. This exercise is done for 36 breaths in each direction. As you inhale, imagine golden energy pouring out of the Big Dipper and descending and filling the Spleen Thrusting Channel. As you exhale, the golden energy gathers in the Spleen. Next, as you inhale, draw the corresponding colored energy from the 7 constellations, as indicated in Table 2, through the corresponding Thrusting Channel to fill your entire body. Then, as you exhale this energy fills the organ corresponding to that color. The order in which this is done is the same as for the five planet meditation described at the end of Section 3. For example, the next color absorbed corresponds to Mars and so is red and is absorbed through the Heart or Fire Thrusting Channel which lies in front of the Taiji Pole and is imagined to come from the last seven constellations in Table 2.

4. Fong, H. Ten Thousand Year Calendar. http://www.henryfong.com/10000.htm . The Ten Thousand Year calendar gives you the Chinese Lunar and Chinese Solar (or Hsia) calendar equivalent of any Western Gregorian dates. Does it have 10,000 years of dates data? Nope, just a 100 years from 1924 to 2024.

By profession, Dr. Eisen was a university Professor specializing in constructing mathematical models such as those in cancer chemotherapy and epilepsy. He has studied and taught Yoga, Judo, and Aikido. Dr. Eisen was the founder and chief-instructor of the Shotokan Karate Clubs at Carnegie-Mellon and Dusquene Universities and the University of Pittsburgh. He helped teach Yoga in Graterford prison. His curiousity about the relation of Qi to healing and martial arts led him to study TCM, Tai Chi and Praying Mantis Kung Fu. He was initiated as a Disciple of Master Gin Foon Mark. Dr. Eisen now teaches (at his Kwoon and by webcam), writes and researches Praying Mantis, Qigong and Yang Tai Chi - see http://home.comcast.net/~carolezak
View all posts by Martin Eisen →
This entry was posted in Scientific Qi Exploration and tagged energy of stars, forms of Qi, heaven energy, Heaven Qi. Bookmark the permalink.

One Response to Scientific Qi Exploration – Energy of Stars. 5a