Down the Rabbit Hole — A Visit with the Dark Feminine 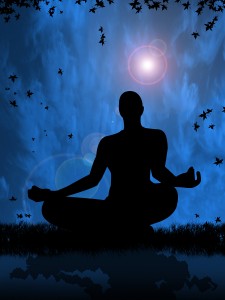 Throughout the year Daoists celebrate various spiritual and natural occasions marked by the phases of the moon and other celestial events of great significance, such as the equinoxes and solstices. The ceremonies can be simply taking just a few moments to perform, while others are quite complex, requiring multiple days, even weeks. Ceremonies are performed on special days when communication between the two worlds is facilitated, interaction between spirit and man is consciously and deliberately initiated and the energy of Heaven & Earth supports the occasion. As a Daoist Priestess, this year, for the Winter Solstice, I decided to perform a Daoist practice known as a “dark retreat”- for 3 days I remained in total darkness.

Dark retreats have been practiced by Buddhists, Christians, Daoists and other spiritual cultivators for millennia. The purpose of dark retreats is to quiet the senses in order to facilitate internal viewing and a deeper state of consciousness. This important practice can be appreciated in Ancestor Lü’s 100 Character Tablet which clearly speaks of practicing non-doing and of quieting the mind. Ancestor Lü’s Classic of Yin Convergence warns practitioners about “the five robbers,” pointing out the need to break the dependency on the senses. Further writings, such as those included in The Secret of the Golden Flower, speak of “turning the light around” to produce the “true elixir.”

The Winter Solstice is the perfect time for a dark retreat. This “shortest day of the year” is synonymous for the “maximum of Yin energy,” since is it the day when our hemisphere spends the longest time in the dark. Yin energy is related to and is often defined as darkness, quiet, receiving, calming, yielding, feminine energies and many more correlations. Yin energy is more introspective and internal when compared to her counterpart, Yang energy. In Daoist alchemical texts, she is called “The Dark Feminine.”

I’ve been reading Daoist classics for many years now and as my experience with meditation, cultivation and ritual grows, so does my understanding of these valuable scriptures. The changes these practices have made in all areas of my life have occurred naturally and what began with something simple, like becoming a vegetarian, has now grown to affect many more areas of my life. Little by little, I have been eliminating as many distractions as possible from my daily activities, choosing carefully those things which I want to have as part of my being. Taking the next step, into total darkness, was an obvious choice. After all, to be truly free from the binding grip of the senses, all connections must be cut. Or to paraphrase the immortal words of Morpheus from the Matrix “How far down the rabbit hole do you want to go?” And so like Alice in Wonderland, I took the red pill and retired into total darkness for 3 days.

On Monday December 20, 2010, after some preparations, I literally descended (the stairs) into what would be my “cave” for the next 3 days. No light entered the room, it was totally black. Normally, I have some hesitation about being alone in the dark, probably left over fear from growing up in a high-crime city, but this day, after 2 years of hard work and little rest, I gladly watched the door close. I was tired and ready to relax.

In darkness I performed an opening ceremony, prayers and incense were offered to Heaven and I prepared a sacred space to allow this meditative journey to unfold. I somewhat expected the first day to be spent on a lot of sleep. It wasn’t hard to figure out, given how tired I was. Several days before the retreat I could feel my body slowly unwinding and letting go of all the tension I’d been holding onto, I was already going into retreat. Now, in darkness, aches and pains surfaced and I felt as though I was an old woman, dying. In fact, I was dying. The old me, the person I had carried around for years, was leaving. Years of work, emotions and input were coming off my body like steam on a hot surface. I considered doing qigong to clear away some of the turbidity but decided that according to the true essence of yin and wuwei, the best option was to step out of the way and let the releasing happen naturally. Despite hours of sleep, more and more waves of turbid qi escaped my tissues and I could feel myself sinking. I was sinking into the darkness, sinking into myself.

The next 2 days were spent in alternating states of sleep, meditation, qigong, prayer or chanting. I questioned whether or not I would feel the moment of the solstice or anything special, different from the cold winter days already here. But the transformation was tangible and I began experiencing the esoteric changes expected during a dark retreat. There were flashes of light and increased light sensitivity, my thoughts slowly began to stabilize and meditation was more focused and clear, lucid dreaming became much more active. There was even a dream where I dreamed I was watching myself dream. In addition, my weiqi fields were expanding and it was hard to distinguish where my body stopped and the air began. My third eye began to expand and I could “see” outside the room very clearly. I was more in touch with my inner essence and my sensitivity was coming from deep within.

At the same time, my conscious and subconscious began to feed me stories that needed to be heard. Into my mind came history and memories of my life that had been packed away into the corners, forgotten or abandoned. So along with the light came the dark- so perfect for a Daoist, the balance and harmony so fervently sought. In the quiet solitude of my make-shift cave I battled the demons of my own darkness. Many of them were transmuted by the Light, others have only scattered, perhaps to return at a later time. For the most part though, it was a fruitful experience, leaving no scars and allowing a stronger, more focused me to emerge.

The whole experience was exquisite, when it was time to exit the room I did so just the same way I went in, gladly. It was time and I was ready. I came out at night to allow my eyes time to adjust to seeing light again. The next morning was the most beautiful sunrise I had ever seen. The sky was crisp and everything looked bright. The world had taken a bath while I was away and it was like witnessing the birth of life. My vision was clear, my head was clear and my spirit was the brightest it had been in a long time. I felt wonderful. Later on, I went back down into my “cave” to clear out the energy and felt like I was walking into a dirty pool. A lot of darkness had been released in the dark. For 3 days I fed my darkness to the dark and the room reeked of dark remains. The corpse of the old woman from the first day was lying on the floor.

Refining the internal elixir in the methods prescribed by the classics requires a lot of conscious work. One must constantly examine the images, thoughts and feelings that the senses and conscious mind continuously feed us to distinguish between “illusion” and reality. It’s a physical and psychological battle fought within each individual who wants to experience the ambrosia offered by the Immortals. There are many ways to understand our human nature, dark retreats are just one way to access the depths of one’s psyche and they should be practiced after extensive experience with meditation. Would I do it again? Absolutely! The next one is already being planned…

[Christina J Barea is a Daoist Priest of the Zheng Yi Pai (China) and a Medical Qigong Therapist. She dedicates her time to helping people find balance through Medical Qigong Therapy, Qigong & Tai Chi instruction and TCM related talks, workshops and courses. She is a member of the National Qigong Association and currently serves on the Board of Directors. Christina has just completed 2 books, the first a translation of Daoist Scripture and the second on qigong exercises. For more information about her please visit: http://www.therisinglotus.com/ ]

This entry was posted in Featured Article and tagged Christina J Barea, dark feminine, down the rabbit hole. Bookmark the permalink.