From the Doctor–Managing Chemotherapy Side-Effects 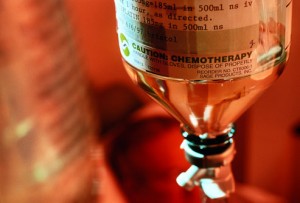 2006, Carlson 2004 a) and chemotherapy is a conventional form of treatment for many types of cancer. This treatment adds on the initial burden related to the disease itself by its physical, psychological and social immediate and long term impacts (Love 1989). Speaking for colorectal cancer (CRC) patients, these treatment-related side-effects not only decrease their quality of life but also compromise treatment efficacy (Berg 1998).

Among the many non-specific side effects of chemotherapy, nausea, fatigue and sleep disorders are among the six more frequently apprehended ones (Hofman 2004, Mustian 2006) by patients.

Chemotherapy-induced nausea and vomiting (CINV) are common and distressing problems in the treatment of CRC patients (Berg 1998, Horiot 2005) as it is for other types of cancer (Redd 2001). Though regimens have improved and are more finely targeted (Grunberg 2004) and despite new antiemetic drugs development (Foubert 2005, Mahesh 2005), the pharmacologic approach remains limited to control CINV even following the recent guidelines (Horiot 2005).

Fatigue is the most frequent symptom cited in relation to cancer and its treatment; often lingering beyond that phase (Carlson 2004, 2006, Visovsky 2003). It was reportedly present at the time of diagnosis in approximately 50-75% of cancer patients and the prevalence increased to 80-96% in patients undergoing chemotherapy (Stasi 2004).

In cancer setting, fatigue is to be defined as a chronic form of tiredness, which is perceived by the patient as being unusual or abnormal, and absolutely disproportionate with respect to the amount of exercise or activity he/she has carried out and which is not removed by resting or sleeping (Tavio 2002).

Also demonstrated as the most distressing phenomenon experienced by cancer patients, fatigue and its manifestations are better appreciated if they are conceptualised as a syndrome, namely, cancer-related fatigue syndrome (CRFS). CRFS influences all aspects of quality of life (QOL) and aggravates the experience of other distressing symptoms like nausea (Winningham 2001). Beside physical and psychosocial impact, there are also adverse economic consequences for the patients and their family (Gregory 2000). For all these reasons, CRFS is now an ever more considered aspect of the toxicity of chemotherapy (Iop 2004). This said, evaluation of CRFS is of a multidimensional complexity (Tavio 2002) and its physiopathologic basis remains poorly understood to date (Stasi 2003).

Sleep disturbance is a prominent concern among cancer patients (Davidson 2002) and would occur in approximately 30 to 50% of this population (O’Donnell 2004, Theobald 2004). It is evident that the cause of chronic sleep difficulties is multifaceted but up until recently, little attention has been given to the potential factors associated with the pathogenesis of cancer related insomnia (Graci 2005). Among these factors, chemotherapy may bring distress to patients and adversely affect sleep quality (Redeker 2000, Simeit 2004, Kuo 2006).

Insomnia in the context of cancer is still undertreated (Theobald 2004) and it appears that the therapeutic approach has to be multimodal to augment its chances of success (Savard 2001, O’Donnel 2004). Cautious usage of hypnotics is recommended as they are associated with a poorer quality of life (Paltiel 2004).

A place for complementary and alternative medicine (CAM).

Merits and limits of the conventional medical and pharmacologic approaches have been noticed relatively to the management of nausea, fatigue and insomnia in the context of cancer and its treatment. Despite the efforts to manage those side-effects, a significant portion of cancer patients is seeking relief with CAM approaches (Lengacher 2006, Cassileth 2004).

CAM use in adults cancer patients could widely vary from 31 to 91% depending to consulted sources (Cassileth 1999, Deng 2005, Rosenthal 2005, Verhoef 2005, Yates 2005). According to research, dissatisfaction with conventional treatment would represent a minor reason for this quest outside of the orthodoxy (Vehoef 2005, Lengacher 2006); a major one would be a desire to enhance quality of life (QOL) and a diminution of cancer symptoms or treatment-related side-effects as a review reports in 17 of the 52 (32.7%) papers studied (Verhoef 2005). As a response to this trend, integrative oncology emerged combining with surgery, chemotherapy and radiation CAM modalities that have some high quality scientific evidence of safety and effectiveness (Rosenthal 2005, Deng 2004, 2005).

A subgroup of them is constituted by mind-body therapies (MBT) which are defined by the National Institute of Health (NIH) as “interventions that use a variety of techniques designed to facilitate the mind’s capacity to affect bodily function and symptoms” (Astin 2003). This definition encompass a vast array of disciplines that may include physical exercise, relaxation, meditation, yoga, qigong and taijiquan among many others. The fundamental element of these practices would be the elicitation of the relaxation response (MBMI.org 2005). The evidence is now strong to support the incorporation of MBT in the management of the treatment and disease-related symptoms of cancer (Astin 2003).

Though a large CAM utilisation by cancer patients, MBT are used by only less than 20% of them (Wolsko et al. 2004). According to the same authors, MBT should be more encouraged for indications with demonstrated efficacy, namely in integrated approach to cancer treatment where research is well supported.

Western cognitive and behavioural interventions are useful to mitigate CINV to a certain measure (Redd 2001). Maintaining or developing a physical exercise program may constitute a part of such interventions as many papers report the benefits of low to moderate intensity aerobic exercise on CINV (Abdulla 2001, Courneya 2002, Visovsky 2005).

Though recognised for its health benefits in general, qigong (literally “energy work”) , a vast system of traditional chinese health exercises, is neglected as a complement in cancer treatment (Chen 2002). According to a body of preliminary clinical observations qigong would reduce chemotherapy side effects (Sancier 1999) and it would be advantageous that its practice were more encouraged (Sancier 2004).

As a part of a cancer supportive care program, qigong has been reported in self administered questionnaires to reduce stress in 78% of 334 patients and to increase well being in 74% of the same patients (Spiegel 2003, 2004). Recently, a quasi-experimental design study reported that qigong significantly reduced pain, numbness, heartburn and dizziness associated with breast cancer and chemotherapy (Lee 2006).

Aerobic exercise is one of the two tested interventions that showed consistent effects to alleviate CRFS (Stasi 2003). Experience has demonstrated the feasibility of exercise programs during chemotherapy for breast cancer for more than a decade (Winningham 1991, Mock 1994) and more recently for other types of cancer (Adamsen 2003, Stevinson 2004, Galvao 2005, Schmitz 2005). 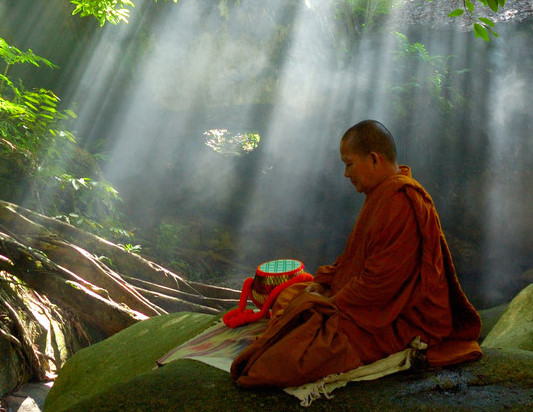 Recently, a more scientific approach has been adopted toward meditation, specifically in regard to mindfulness-based stress reduction (MBSR) method for healthy people in general (Davidson 2003) and for cancer patients in particular (Speca 2000, Carlson 2001, 2003, 2004 b, 2005). A rationale has been demonstrated for MBSR application in cancer population (Mackenzie 2005); fatigue diminution and an increase of vigor measured by the Profile of Mood State (POMS) questionnaire subscales being significant elements. Numerous other QOL outcomes like anxiety, depressive mood and control perception also benefited from MBSR intervention (Carlson cited, Tacon 2003, 2004).

An exploratory study revealed that MBSR positively affected the sleep quality of a heterogeneous sample of cancer patients. Overall sleep disturbance was significantly reduced and largest improvements occurred in the areas of subjective sleep quality, sleep efficiency and duration as measured by the Pittsburg Sleep Quality Index (PSQI) (Carlson 2005).

Yoga is a MBT for which preliminary evidence suggests positive psychological impact on cancer survivors, particularly for mood and stress (Culos-Reid 2006). It is also reported to significantly improve sleep-related outcomes in patients with lymphoma. These included better subjective sleep quality, faster sleep latency, longer sleep duration also measured with the PSQI. Less use of sleep medication has also been documented (Cohen 2004).

Outside cancer treatment context, taijiquan (TJQ) has been reported to improve self-rated quality of sleep in older adults (Li 2004).

Taijiquan as a MBT to complement cancer treatment 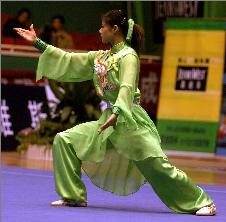 In seven out of seventeen controlled trials with or without randomization, TJQ is recognised to improve QOL and relieve stress (Klein 2004). Though successful cancer supportive programs including TJQ has been described (CancerWise 2002, HealthWorldOnline 2003) and the publication of a few studies concerning breast cancer survivors (Mustian 2004 a,b, Davis 2004), there has been no study assessing TJQ impact on chemotherapy side effects according to our knowledge at redaction time.

Both martial tradition (Diepersloot 1995, Liu 1986, Al Huang 1986) and scientific researchers (Li 2004, Yeh 2004, Fisher 2003, Sandlund 2000) acknowledge meditative aspects to TJQ. A theoretic mindfulness model proposes that three axioms (intention, attention and attitude) must be present for mindfulness (paying attention non-judgementally moment to moment, on purpose) to work (Shapiro 2006). According to this conception, TJQ could be considered a kind of mindfulness meditation in motion as the attention is deliberately and constantly maintained on each movement in a relaxed non judgmental manner.

Finally, TJQ could be considered a form of qigong initially applied to martial art development. Now incorporated in traditional medicine (Lalancette 2005), it is recognised as a proper modality to facilitate qi (vital energy) circulation. Regarding chemotherapy side effects, we should expect comparable benefits to those of qigong.

Summarising, TJQ is an art and a discipline per se but, as we just saw, it shares many characteristics of other disciplines that have demonstrated certain benefits in integrated cancer treatment. TJQ is a low to moderate aerobic exercise that shares similitudes with yoga, qigong and meditation. For these reasons, we think that it might be helpful for patients with colorectal cancer undergoing chemotherapy.

Abdulla A, Abdulla F, Exercise: a prescription for cancer patients, The Canadian Journal of Diagnosis, 2001 Jun;:111-116.

Cohen L, Warneke C, Fouladi RT, Rodriguez MA, Chaoul-Reich A, Psychological adjustment and sleep quality in a randomized trial of the effects of a Tibetan yoga intervention in patients with lymphoma, Cancer. 2004 May 15;100(10):2253-60.

Gregory A and al., Impact of cancer-related fatigue on the lives of patients: new findings from the Fatigue Coalition, The Oncologist 2000;5:353-360.

Iop A, Manfredi Am, Bonura S, Fatigue in cancer patients receiving chemotherapy: an analysis of published studies, Annals of Oncology 2004;15:712-720.

Meares A, Regression of cancer after intensive meditation, Medical Journal of Australia, July 31, 1976.

Meares A, The psychological treatment of cancer, the patient’s confusion of the time for living with the time for dying, Aust Fam Physician, 1979;8:801-805.

Meares A, What can the cancer patient expect from intensive meditation? Aust Fam Physician, 1980;9:322-325.

Mustian KM et al., Exercise and side effects among 749 patients during and after treatment for cancer: a University of Rochester Cancer Center Community Clinical Oncology Program study, Support Care Cancer 2006 Feb 16 (Epub ahead of print).

3 Responses to From the Doctor–Managing Chemotherapy Side-Effects