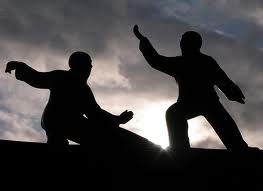 It has been shown that in certain circumstances, practicing tai chi has an effect on boosting the immune system for older adults similar to getting a vaccination.   Michael R. Irwin, MD, a professor at the University of California, Los Angeles, and other scientists have conducted research showing that practicing Tai Chi Chih, a modified tai chi form, provided the same benefit as getting a vaccination to prevent Shingles, an immune system deficiency disease.  In a related study, people who practiced Tai Chi Chih were also vaccinated and their immunity levels were doubled.   There are additional health benefits that the practitioners gained by practicing Tai Chi Chih which included depression abatement, physical function enhancement, body pain reduction, vitality growth, mental health improvement, and sleep quality betterment.

Dr. Michael Irwin was the recipient of the Scientist of the Year Award by the recent World Congress on Qigong and the Traditional Chinese Medicine (TCM).  He presented the aforementioned research results during the Scientific Symposium during the World Congress held in San Francisco in late April.

Tai Chi Chih is a modified tai chi form.  It consists of 19 movements and one pose with minimal aerobic impact.  It was developed by Justin Stone in 1974.  It adheres to most of the tai chi fundamentals, i.e. clearly identifying Solid and Empty, breathe slowly, consistent and constant body weight shifting, proper body alignment, practicing with Intent, and moving arms and hands through “thick” air, and totally relaxing the body.  It focuses more on the Qigong aspect of tai chi.

Dr. Irwin, Director of the UCLA Cousins Center for Psychoneuroimmunology and Distinguished Professor of Psychiatry and Biobehavioral Sciences, along with other scientists did several studies from 2001 to 2005.  They worked with 112 healthy adults aged 59 to 86 with an average age of 70, who were divided into two groups: one group was taught Tai Chi Chih while the other group was provided health related info.  The tai chi session and the health info session were 40 minutes each and conducted three times each week.  After 16 weeks, the health education group was given a vaccination to boost their immunity to prevent development of Shingles.  At the 25th week, it was found that the immunity level of both groups was elevated.  Surprisingly, the tai chi group’s immunity index was slightly higher than the other group inoculated with vaccine.  According to Dr. Irwin, this result is extremely encouraging.  It shows that tai chi alone can provide the same health benefit if not more as immunization and in addition, it is especially good for many seniors since some of them are not suitable for vaccination.  To further the understanding of the relationship of tai chi practice and vaccination, the researchers also vaccinated some of the tai chi practitioners.  The results showed that their immunity level was twice as high as the tai chi group who did not get the vaccination and the health education group who only received vaccination.   It shows that practicing tai chi does not interfere with the benefits of getting a vaccination. In fact, they can work together to provide a greater benefit.

It was extremely remarkable to discover that the average VZV-RCF level or immunity index of Shingles prevention of the older adults who practiced Tai Chi Chih and got a vaccination is comparable with the average level of healthy adults of 30 years younger.

Violet Li – an award winning journalist, certified Tai Chi instructor, and certified Heart Zone Trainer, has studied Tai Chi, Qigong, and heart fitness with many grandmasters and experts, and has taught Tai Chi, Qigong, and other fitness programs to various groups. Her passion for Tai Chi, Qigong, and fitness motivates her to write articles on the related events, people, theories, techniques, practices, and health benefits for individuals. NBC of St. Louis featured one of her classes in “100 Year Old Tai Chi Artist”. Ms. Li writes regularly for the St. Louis Tai Chi Examiner and the National Tai Chi Examiner, and has readership from over 18 different countries. Do you have a story or comment to share? Please contact her at violet.li@tadi.com.