Los Altos, California. August 11, 2013 – Dr. Ken Sancier, the founder of the non-profit
Qigong Institute (http://www.qigonginstitute.org), has passed away at age 93. 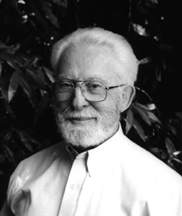 Dr. Sancier earned a PhD in chemistry in 1949 from Johns Hopkins University while working at Linde Air Products Company as a gas chemist. He had a distinguished early career as a lecturer and researcher in chemistry at the University of Tokyo, Brookhaven National Laboratory, and Johns Hopkins. He spent his last thirty three years in industry as a senior scientist in basic and applied materials science at SRI International in Menlo Park, California researching such diverse areas as magnetic properties of materials, solar energy conversion, electron spin resonance spectroscopy, and semiconductor surface reactions. His research resulted in over seventy technical publications and ten patents.

In 1984, Dr. Sancier retired from SRI International and spent about a year finding an endeavor to replace the intellectual stimulation of research at SRI. He settled on Qigong because he found a challenge in explaining the scientific basis of Qigong. The Qigong Institute was initially developed under the umbrella of the East West Academy of Healing Arts. Dr. Effie Chow was very instrumental in providing the first home, support, and funding for the Qigong Institute. In 1987, Dr. Sancier turned the Qigong Institute into a separate organization, and it was incorporated in 1997 as a 501(c)(3) non-profit organization.

Dr. Sancier published a total of twenty-seven papers as a result of his interest and experiments in Qigong. He searched the literature and found that almost all scientific research had been conducted in China. To become familiarized with the research in China, he presented his research at international conferences in Beijing, Shanghai, Tokyo, and San Francisco. Dr. Sancier developed the original Qigong Database™ to collect this vast amount of scientific information on Qigong. It is the only online resource for much of this early research. He later decided to add alternative healing and energy medicine practices to his research, including Yoga, Reiki, Acupuncture, and Mind-Body healing and therapies. To reflect its expanded scope, the database was renamed to The Qigong and Energy Medicine Database™, and it currently has close to ten thousand abstracts.

He was the first recipient of the National Qigong Association Lifetime Achievement Award and received the Meritorious Activity Prize from the International Society of Life Information Science (ISLIS). World Tai Chi and Qigong Day 2012 was dedicated to Dr. Sancier for his contribution to global health through the founding of the Qigong Institute and creation of the Qigong and Energy Medicine Database™. Dr. Sancier appeared in the original PBS documentary on Qigong: ‘Qigong – Ancient Chinese Healing for the 21st Century.’ He was the first honorary member of the National Qigong Association in 1997 for his work in promoting Qigong by establishing the Qigong Institute and the publishing of original papers on Qigong, with the most referenced being Anti-Aging Benefits of Qigong. His belief was that “The science and art of Qigong may open a window into new thinking about health, medicine, psychology and spirituality.”

About the Qigong Institute

The Qigong Institute is a 501(c)(3) non-profit organization dedicated to serving the public through promoting Qigong education and research. Its work is supported by donations. There are no paid officers, directors, or staff. For further information about the Qigong Institute, visit the web site http://www. qigonginstitute.org or contact by E-mail at qi@qigonginstitute.org.
Facebook: https://www.facebook.com/pages/Qigong-Institute/139718452735391.

The Qigong and Energy Medicine Database™ is a copyright of the Qigong Institute.

This entry was posted in Qigong and tagged Qigong. Bookmark the permalink.