The Divergent or Distinct Meridians (Part 2)

Part 2: The Divergent or Distinct Meridians

Its Access Point is S 30 (Qi Chong or Surging Qi), which is close to the departure point, near the symphysis pubis and inguinal ligament as described in (2).

Its Return Point is officially B 1 (Jing Ming or Bright Eyes, which is near the inner canthus of the eye.  Needling this point can be stressful to most patients and S 1 (Cheng Qi or Tear Container) is used instead.  There is a branch from S1 to B 1 (2).

Diverging from the Spleen Meridian on the thigh, it converges with the Stomach Divergent Meridian, runs upward to the throat, and finally enters the tongue.  Another description of the departure point is near the symphysis pubis and inguinal ligament (2).

Its Access Point is Sp 12 (Chong Men or Surging Gate), which is near to the departure point in (2).  It has the same Return Points described in (a).

The region of greatest activity for this couplet is the abdominal and pelvic cavities (uterus, ovaries, large and small intestines, stomach and spleen).  However, the esophageal, tongue, nasal, frontal and maxillary sinus regions also can be treated with good results.

It starts by leaving its principal meridian from the posterior aspect of the shoulder, passes downward to the axilla, goes deeper to pass into the heart and then further downwards to pass into the small intestine.  The Small Intestine Divergent Channel then joins its principal meridian, which it follows upward through the throat.  Finally, it runs in a branch of the Small Intestine Meridian to terminate at the inner canthus of the eye at B 1, joining the Heart Divergent Meridian.

Its Access Point is SI 10 (Nao Shu or Upper Arm Shu) and its return Point is B 1. 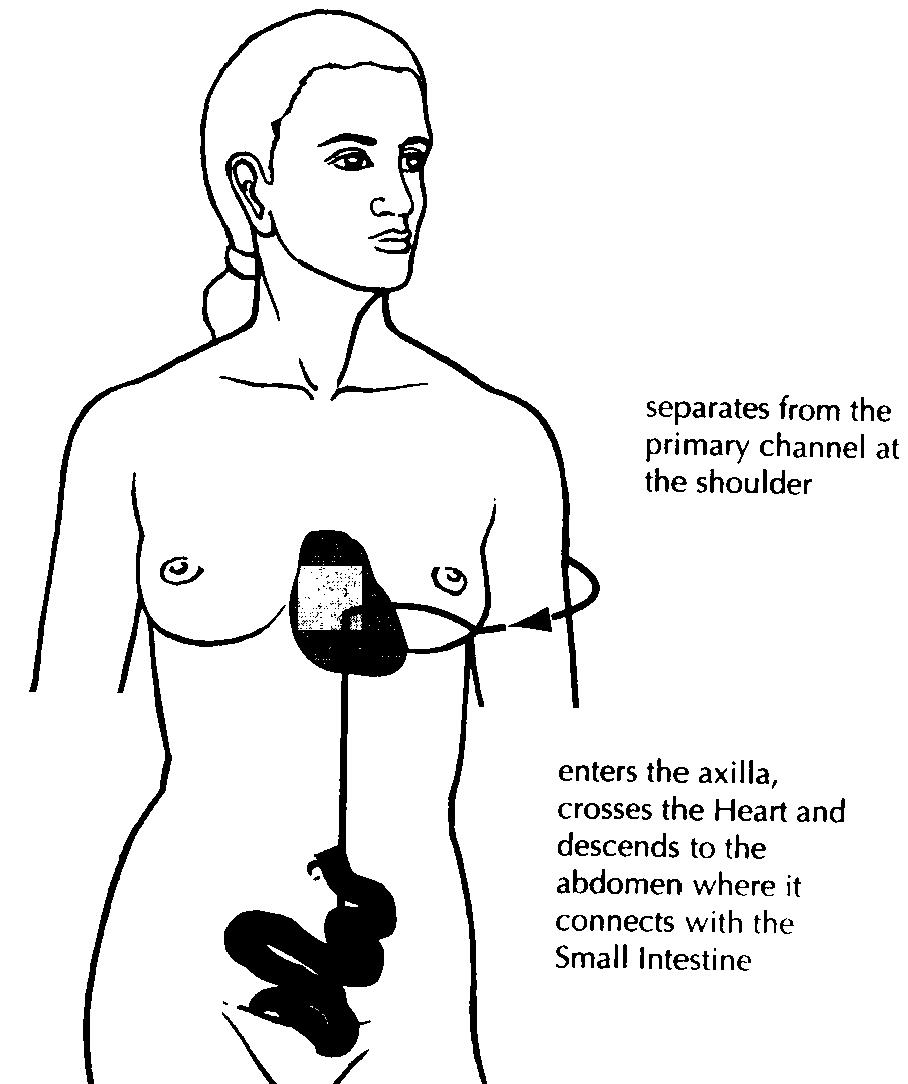 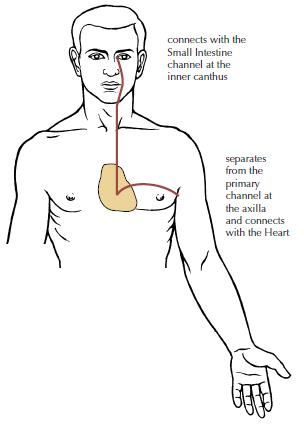 After diverging rom the Heart Meridian in the axillary fossa, it penetrates the chest and enters the heart.  Then it ascends to the throat, emerges on the face and joins the Principal and Distinct Meridians of the Small Intestine at the inner canthus of the eye (B 1).

Its Access Point is H 1 (Ni Quan or Highest Spring) and its Return Point is B 1.

These pathways are the most poorly defined and also used the least in clinical applications.

The San Jiao Meridian has a branch which connects to Du 20 (Bai Hui or Hundred Convergences), from which the San Jiao Distinct Meridian takes its origin.  From there it descends behind the ear to SJ 16 (Tian You or Celestial Window), where it meets the Heart Divergent Meridian and also has a connection with the brain.  Then, it descends through the supraclavicular fossa and penetrates the thorax to disperse into the Upper. Middle and Lower Jiaos.

It starts 5 cun below the axilla (1), while other sources (4) state the starting point as P 1 (Tian Chi or Celestial Pool).  It travels to the chest, penetrating deeply and branches into two.  The descending branch communicates with the Sanjiao.  The ascending branch passes through the thorax, becoming superficial at the neck, and unites with the Divergent and Principal Meridians behind the ear at SJ 16.

Its Access Point is P 1 and its Return Point is Du 20. 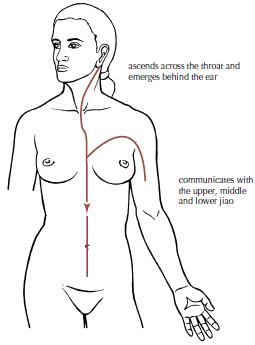 It separates from the Large Intestine Meridian on the hand and ascends the arm to the shoulder to LI 15 (Jain Yu or Shoulder Bone) according to (1).  However, in (4) this is its starting point.  Two branches are formed at LI 15.  One travels backward over the superior border of the scapula to meet the spinal column at Du 14 (Da Zhu or great Hammer).  The other branch travels anteriorly to the chest, where it goes deep and branches into two.  The descending branch penetrates the large intestine.  The other branch ascends through the lungs to surface at the supraclavicular fossa at S 12 (Que Pen or Empty Basin).  Then it passes up the side of the neck to LI 18 (Fu Tu or Protuberance Assistant), where it unites with the Large Intestine Meridian and the Lung Divergent Meridian. 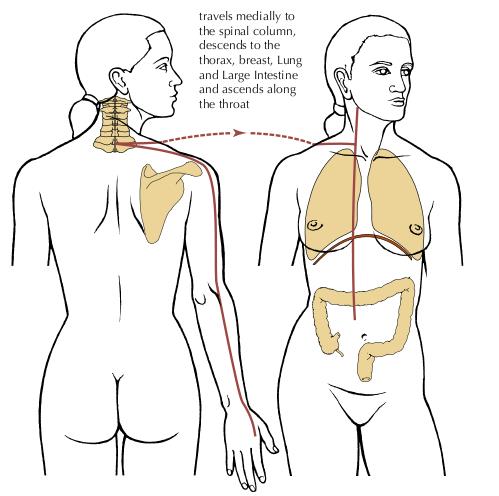 It derives from the Lung Meridian in the axilla, runs anterior to the Pericardium Meridian into the chest, penetrates into the lungs and branches into two.  One branch descends to penetrate the large intestine.  The other ascends up the throat to LI 18, where it joins the Large Intestine Distinct Meridian. 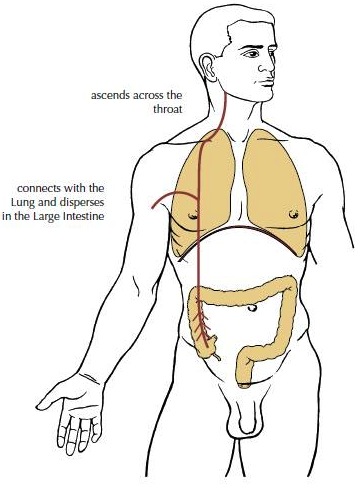 This couplet influences the associated respiratory contents of the thorax (the trachea, vocal cords, larynx, pleura, lung parenchyma and bronchi).  Even though it passes through the large intestine, it has no influence on this organ.  Clinically, this organ is affected by the Liver/Gallbladder, Spleen/Stomach and Kidney/Bladder Distinct Meridian couplets.

Non-acupuncturists can influence the Divergent Meridians using Tuina (6).  Another possibility, instead of actual needling, is to follow the proper acupuncture protocol, but use the Qigong invisible needle technique, as described in (5).

The Distinct Meridians are not use to treat functional problems or energetic disturbances, but disorders of a material basis that can be detected by examination of biopsied tissues, laboratory specimens, x-ray or nuclear medicine studies.

They can be used as a first approach to acute problems before surgical or pharmaceutical therapies are initiated, as an adjunct to the conventional treatment or after the medical treatment has failed.

The rules for activating the Divergent Meridians are:

The couplet pathway influences an anatomical region as much as it influences the two associated organs.  In some couplets only one organ lies in the region of greatest influence.  In others, both organs are in the anatomical region, but the influence of the Divergent Meridians on the region is greater than on the organs.  Table 1 lists some conditions that can be treated by using the Divergent Meridian couplets. 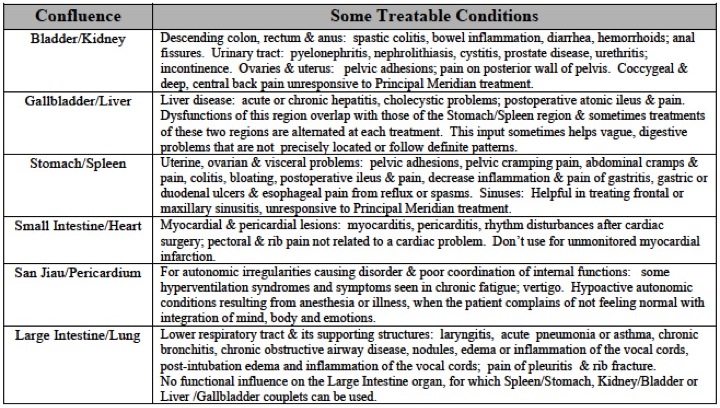 Table 1. Some Conditions Treated by the Distinct Meridian Couplets

By profession, Dr. Eisen was a university Professor specializing in constructing mathematical models such as those in cancer chemotherapy and epilepsy. He has studied and taught Yoga, Judo, and Aikido. Dr. Eisen was the founder and chief-instructor of the Shotokan Karate Clubs at Carnegie-Mellon and Dusquene Universities and the University of Pittsburgh. He helped teach Yoga in Graterford prison. His curiousity about the relation of Qi to healing and martial arts led him to study TCM, Tai Chi and Praying Mantis Kung Fu. He was initiated as a Disciple of Master Gin Foon Mark. Dr. Eisen now teaches (at his Kwoon and by webcam), writes and researches Praying Mantis, Qigong and Yang Tai Chi - see http://home.comcast.net/~carolezak
View all posts by Martin Eisen →
This entry was posted in Scientific Qi Exploration and tagged acupuncture, Chinese Medicine, Marty Eisen, Scientific Qi Exploration. Bookmark the permalink.

One Response to The Divergent or Distinct Meridians (Part 2)