The Extraordinary Meridians or Vessels — Part 1

The Extraordinary Meridians or Vessels (Part 1)

(a)  Extra Meridians because they were discovered later than the 12 main Meridians and so were considered extra to these.  Knowledge of these meridians is ascribed to Li-Shi Zhen (1518- 1593).  A book “Qi Jing Ba Mai Chao,” published in 1572, described the Extraordinary Meridians.

(b)  Odd Meridians since some of them –e.g. Ren, Du and Dai, are single Vessels and not paired as the regular Meridians.  Also, they do not flow out of any of the Zang Fu Organs.

(c)  Eight Psychic Channels because they all have a strong effect on psychic and psychological functions.

(d)  Miraculous Meridians was coined by the French, who observed therapeutic results on using these, which could not be obtained using the regular Meridians.

(e)  Special Meridians because they are Extra and also Miraculous.

(f)  Comprehensive Points because their effect is more comprehensive on the body and mind than that of the twelve regular meridians.

(g)  Homeostatic Meridians because these meridians maintain homeostasis, as described below.

(h)  Ancestral, Prenatal, Pre-Heaven Channels because they help regulate the growth of the embryo and fetus, as discussed in Section 2, and become less active after birth.

The prenatal energies, Jing (Essence), Qi (Energy) and Shen (Spirit), are contained in both the father’s sperm and the mother’s eggs.  These three energies in the sperm and egg will be called the Father Qi and the Mother Qi.  The combination of Father Qi and Mother Qi is known as Yuan (Original) Qi.

The ovum is polarized at the entry point of the sperm creating an energy vortex.  This vortex draws Heaven’s Energy, Earth’s Energy and the Eternal Soul into the egg.  It also forms a central column of energy, the Taiji Pole.  This polarization also determines the ventral and dorsal surface.

After the first cellular division, the Conception and Governing Vessels appear on ventral and dorsal surfaces, respectively.  A left and right side is also established containing the Yin and Yang Heel Vessels.  The Yin and Yang Linking Vessels are also formed.

The second cellular division is accompanied by the development of the Belt and Thrusting Vessels.

The mother’s Meridians carry Qi that nourish and create the development of the baby.  The ten Lunar months of creation are described in (2).

For proper treatment, a Qigong doctor should know energetic fetal development in order to diagnose the origin and causes of a disease as congenital or acquired.

After birth, the energy in the Extra Meridians slows down considerably.  They serve as reservoirs of Qi.  One of the stages in the Daoist practice of Nei Gong is to reverse this process and restore a healthy movement in the congenital Vessels.

3.  Some General Properties of the Extra Meridians (2,3)

They can absorb energy from the Ordinary Meridians and also supply energy to them when required – for example, in the event of shock.

(b)  Store and Circulate Jing

They draw their energy from the Kidneys.  These Vessels contain Essence, which is stored in the Kidneys, and circulate it around the body.  This helps combine the circulation of Nutritive Qi with Essence.  In particular, they circulate Jing to the skin, hair, and Curious Organs.

Since they circulate Essence all over the body and are connected to the Main Meridians, they are a link between the Pre-Heaven and Post-Heaven Qi.  Thus, they can be used for treatments related to the Pre-Heaven Qi and the individual’s constitution.

The Extraordinary Vessels provide the link between the body’s energy flow and the Curious Organs.  The six Curious (Ancestral) Organs are: Marrow, Blood Vessels, Bone, Brain, Gall Bladder, and Uterus.

Their regulating Vessels appear in Table 1.

The life cycles in men (every 8 years) and in women (every 7 years) are governed by the Thrusting and Conception Vessels, respectively.  These cycles are determined by Jing, which is circulated by the extraordinary Vessels.

The Conception, Governing, and Thrusting Vessels are primary responsible for circulating Wei Qi over the abdomen, thorax, and back.  Although Wei Qi is circulated by the Lungs, its root is in the Kidneys.  The Extra Vessels derive from the Kidneys and so provide the link between the Kidney Jing and the Wei Qi.  This explains why the immune system can become vulnerable to Evil Pathogens and allergic reactions when there is a Kidney deficiency.

The Ling Shu, Hai Lun (Magic Pivot) describes the Four Seas, their regulating Vessels and their Access Points as well as symtoms of Excess and Deficiency.  See Table 2.

The Sea of Blood is also related to the Liver and the Sp 10 (Xue Hai). 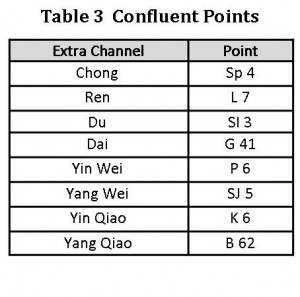 ians and is governed by the Chong Meridian (4).

These are points that are located on the Twelve Primary Meridians through which the Eight Extra Meridians can be accessed.

4.  Generalities on the Clinical Use of the Extra Vessels (1, 3)

These Vessels can be grouped in a few different ways for clinical use.

The first grouping is into four pairs of Yin and Yang Vessels according to their polarity, as shown in Table 4.  Each member of a pair has a Master or Opening Point which affects the Channel’s energy flow to different body areas.

The Extra Vessels can also be arranged into four groups according to their functions.

(a)  Conception, Governing and Thrusting Vessels

These Vessels originate from the Kidneys and so are connected to the Essence.  These can be used more often than the other Extraordinary Vessels to affect energy at a deep constitutional level.

(b)  Yin and Yang Heel Vessels

These Vessels link the Yin and Yang Channels.  Their Master Points are on the Triple Burner and Pericardium Meridians, which are also internally/externally related.

This is the only horizontal Meridian.  It has an influence on the energy circulation in the legs because it encircles all the ordinary Meridians.

The Extraordinary Vessels can also be grouped by their distribution of energy through the central axis of the body and three perpendicular planes.

The Conception and Governing Vessels lie in the midsagittal plane of the body, the Yang Heel and Linking Vessels define the coronal plane and the Belt Vessel influences a transverse plane.

The path and function of each Extraordinary Vessel is discussed in the following sections.

In Pinyin Du means governing.  This Channel governs the formation of the cerebrum and medulla oblongata during embryonic development.  Recall that it is called the Sea of the Yang Meridians because it controls all the Yang Channels.  It nourishes the brain and spinal cord, helps in combining the Yuan (Original) Qi of the Kidneys and tonifies the Kidney Yang.  The Du Meridian strengthens the spine and back.  If the Du Meridian becomes excessive, the back is stiff.  If it is depleted, the head becomes shaky, heavy and unstable.

Another branch emerges at Du 16 or GV-16 (Feng Fu, on the midline at the nape of the neck, in the depression immediately below the external occipital protuberance) , enters the brain and ascends to Du 20.

Another set of branches from the perineum, encircle the anus, envelops the external genitalia, ascend past the navel, Heart and throat and wind around the mouth.  After circling the mouth, they ascend to the eyes and emerge just below the middle of the eyes.  See Figures 1 and 2. 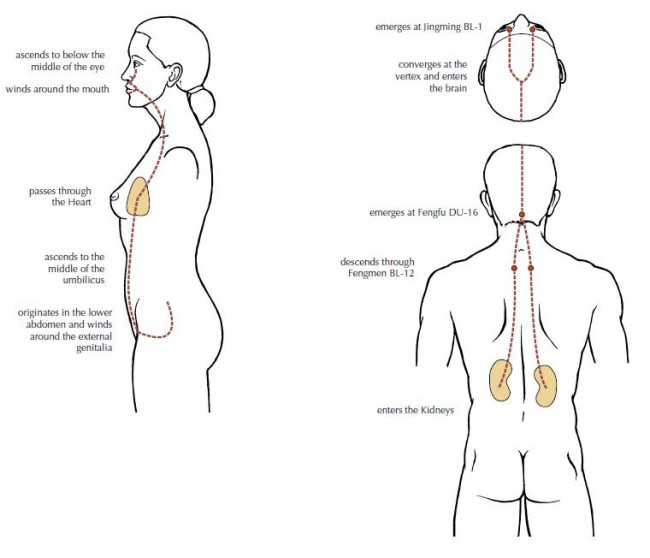 Figure 2.   Some Branches of the Governing Meridian

From the inside of the eyes at Jingming (B1, .1 cun medial and superior to the inner canthus of the eye, near the medial border of the orbit), branches follow the Bladder Meridian up the forehead and converge at Du 20.  There the Vessel enters the brain and emerges at Du 16 where it divides into two branches.  These descend, pass through the Fengmen points (B 12,  1.5 cun lateral to the Du Meridian, at the level of the lower border of the spinous process of the second thoracic vertebra) and enter the Kidneys.  See Figure 2.

Different Nei Gong schools may list different branches, depending on the types of Qigong they practice.  Acupuncture texts only list they main branch, since its points are accessible to needling (3, 4), while the other branches are only accessible to the mind.

6. Functions and Uses of the Du Meridian

Some functions of the Du Meridian appear in Table 5.

Table 5.     Some Functions of the Du Meridian

The Du Meridian can be used for the following problems.

(a)  The Du Meridian is useful for chronic lower backache due to Kidney Deficiency.  The back can be strengthened and the spine actually straightened.  In men, only the Governing Vessel can be used, but in women it is best to also use the Conception Vessel.  Knee and leg pain can also occur.

(b)  To expel Wind:  For Exterior Wind it can be used to release to the Exterior at the Greater Yang stage of The Six Stages.  Therefore, it can be used for symptoms like runny nose, fever, headache and a stiff neck.  Interior Wind can also be subdued by using the Du Meridian.  Thus, it is used for symptoms such as tremors, dizziness, convulsions, epilepsy and for the results of Wind Stroke.

(c)  The Governing Vessel can be used to strengthen the Kidney function of nourishing Marrow and the Brain.  Hence, it can treat symptoms like tinnitus, dizziness and poor memory.

(e)  Since the Du Meridian is connected to the body’s Jing (Kidney), Qi (Heart) and Shen (Heart), it can treat depression, madness, slow recovery after shock, lack of mental stability, lack of vitality, pure and impure thoughts; hallucinations.

(g)  For diseases of the head (tetanus, apoplexy, aphasia, epilepsy, etc.), back and neck (pain and stiffness in the spinal column), spastic movement of the extremities; gastrointestinal problems (pain; Qi rushing up into the abdomen), all resulting from an Excess condition in the Du Meridian.

(h)  For a heavy feeling and shaking of the head, irritability, inability to concentrate, poor physical and mental stamina, weak character, sterility or impotence, which can all result from a Deficient condition in Governing Vessel 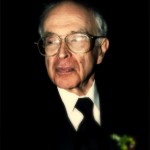 By profession, Dr. Eisen was a university Professor specializing in constructing mathematical models such as those in cancer chemotherapy and epilepsy. He has studied and taught Yoga, Judo, and Aikido. Dr. Eisen was the founder and chief-instructor of the Shotokan Karate Clubs at Carnegie-Mellon and Dusquene Universities and the University of Pittsburgh. He helped teach Yoga in Graterford prison. His curiousity about the relation of Qi to healing and martial arts led him to study TCM, Tai Chi and Praying Mantis Kung Fu. He was initiated as a Disciple of Master Gin Foon Mark. Dr. Eisen now teaches (at his Kwoon and by webcam), writes and researches Praying Mantis, Qigong and Yang Tai Chi - see http://home.comcast.net/~carolezak
View all posts by Martin Eisen →
This entry was posted in Scientific Qi Exploration and tagged acupuncture, Marty Eisen Ph.D., Qi Exploration. Bookmark the permalink.

8 Responses to The Extraordinary Meridians or Vessels — Part 1