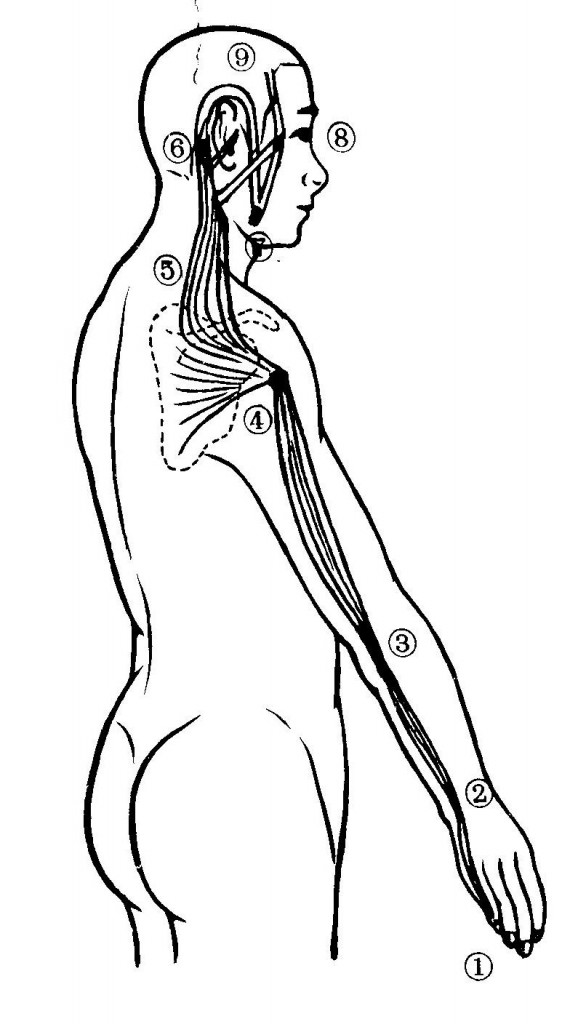 The pathway begins at the little finger and attaches at the back of the wrist (1, 2).  It ascends along the forearm to attach at the medial condyle of the humerus (2, 3).  Continuing along the upper arm, it attaches below the axilla (3, 4).  A branch ascends behind the axilla, curving around the scapula and running in front of the Bladder Meridian on the neck and attaching behind the ear (5, 6).  Then, it continues around the ear and descends to attach to the lower jaw and continues upward to the outer canthus (6, 7, 8).  The straight portion of this branch has two subbranches.

The upper subbranch emerges behind the auricle and enters the ear (6).  The lower subbranch starts at the mandible and ascends around the teeth to the outer canthus and attaches at the angle of the forehead (8, 9).

The symptoms of May Rheumatism (3) are:  pain in the little finger which can extend behind the medial epicondyle to the medial aspect of the upper arm and axilla, pain around the scapula extending to the neck, tinnitus, ear pain radiating to the submaxillary area;  prolonged closing  of the eyes can result in delayed vision.  Fistulas, swollen neck and sensations of hot and cold may follow spasms of the neck.

It begins near the tip of the fourth finger at attaches at the dorsum of the wrist (1, 2).  Then, it ascends between the radius and ulna and attaches at the olecranon of the elbow (2,3). Running upward along the lateral aspect of the upper arm, it crosses the shoulder and neck and joins the Small intestine Jing Jin (3, 4).   A branch emerges at the mandibular angle to connect to the tongue’s root (5).  Another branch ascends in front of the ear to the outer canthus, crosses the temple to the corner of the forehead (6, 7).

Symptoms of June Rheumatism (3) are:  Cramps and pain along the Pathway; curled tongue. 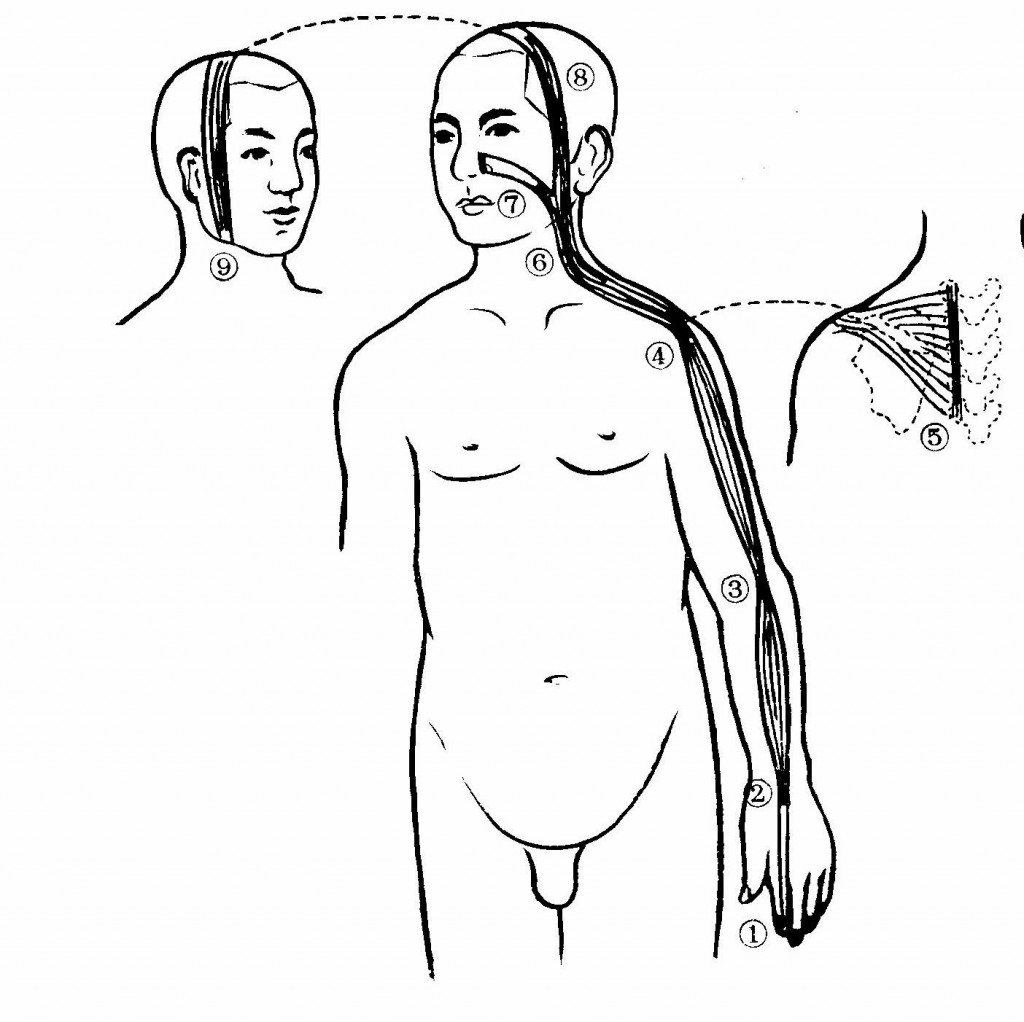 The symptoms of April Rheumatism (3) are:  cramps and spasms along the Pathway, difficulty in raising the shoulders; neck pain and difficulty with neck rotation. 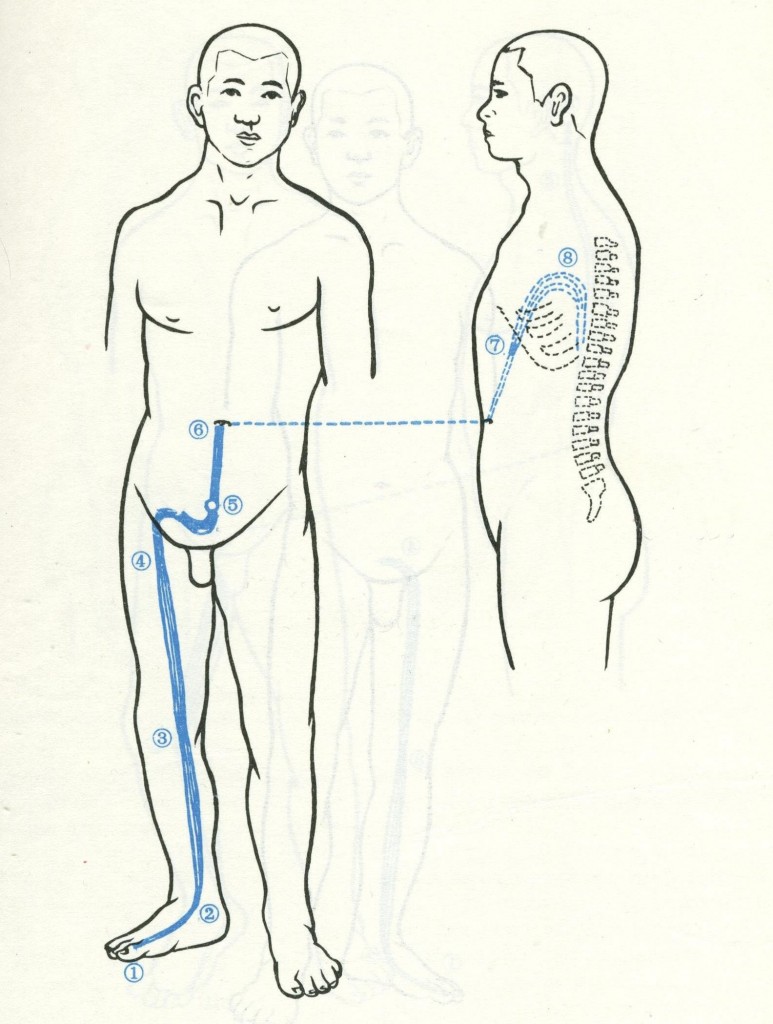 It begins near the lower corner of the medial, big toe nail and attaches at the medial malleolus (1, 2).  Ascending the lower leg it attaches to the medial side of the knee (3) and continue up the medial aspect of the thigh, attaching at the hip (4).  Then, it curves and passes to the midline, giving off a small set of Vessels which surround the genitalia (4, 8).  The straight portion attaches to the umbilicus (5, 6) and enters the abdominal cavity, where it attaches to the ribs and disperses through the chest (7, 8).  An internal branch adheres to the spine.

By profession, Dr. Eisen was a university Professor specializing in constructing mathematical models such as those in cancer chemotherapy and epilepsy. He has studied and taught Yoga, Judo, and Aikido. Dr. Eisen was the founder and chief-instructor of the Shotokan Karate Clubs at Carnegie-Mellon and Dusquene Universities and the University of Pittsburgh. He helped teach Yoga in Graterford prison. His curiousity about the relation of Qi to healing and martial arts led him to study TCM, Tai Chi and Praying Mantis Kung Fu. He was initiated as a Disciple of Master Gin Foon Mark. Dr. Eisen now teaches (at his Kwoon and by webcam), writes and researches Praying Mantis, Qigong and Yang Tai Chi - see http://home.comcast.net/~carolezak
View all posts by Martin Eisen →
This entry was posted in Qi Cultivation and Dao, Scientific Qi Exploration. Bookmark the permalink.