Chinese herbal medicine is a rich tradition that utilizes an incredibly wide range of substances and methods of their administration.  Today the most common way of preparing herbs is in the form of an aqueous decoction, in which bulk herbs are boiled in water and the resulting liquid ingested.  Aside from this, various types of herbal pills, capsules, and extract powders are also popular Chinese medicines.  Despite this seemingly limited list, from the earliest times Chinese herbal medicine has been used flexibly and in myriad ways.

One of perhaps the least known but highly effective traditional methods of herb administration is in the form of medicated syrups.  Nonetheless, syrups are underutilized in clinical practice, and many Western practitioners of Chinese medicine are completely unschooled in syrup production or use.  Medicated syrups are especially useful in treating chronic conditions or for preventing disease, making them an almost essential adjunct to Nourishing Life methods (Yang Sheng Fa 養生法).

The word Gao (膏) in Chinese means an oily or sticky substance.  The Shuo Wen Jie Zi (說文解子), the most important pre-modern dictionary of Chinese language that analyzes the definition and etymology of Chinese characters, defines Gao as Zhi (脂), fat.   In the practice of Chinese Medicine, Gao can refer to a number of herbal preparations including liniments, ointments or plasters.  These external preparations are commonly used, commercially available, and familiar to most practitioners in the west.

However, Gao also refers to medicinal syrups for internal use.  In early medical writings, syrups were referred to simply as Gao or Jian (煎), and in the Shuo Wen Jie Zi, Jian is defined as Ao (熬), to boil, simmer or stew – an apt description of how syrups are produced.  By the Ming (1368 – 1644) and Qing (1644 – 1911) dynasties, syrups for internal administration were referred to as Gao Zi (膏滋) or Jian Gao (煎膏), while topical plasters or pastes were called Gao Yao (膏藥) or Hei Gao Yao (黑膏藥) to distinguish between the two.

Medicated syrups are produced by decocting and then highly concentrating herbal formulas, a process that takes repeated boiling of large amounts of bulk herbs.  The concentration, in which as many as 15 liters of herb liquid is cooked down to less than 0.5 liters, is a process that alone can take 10 to 12 hours.  Once the concentrated liquid is ready, it is preserved by mixing with honey or by preparing in a sugar base.  Although the process is extensive and time consuming, unlike conventional decoctions that are prepared daily, one batch of syrup lasts anywhere from several weeks to several months, making their use very convenient.  The formulas often rely heavily on supplementing (tonic) herbs, and, like medicated liquors, are a way to preserve and stretch out expensive or rare herbs that would be more quickly consumed if taken in pills or decoctions.  Lastly, medicated syrups are pleasant tasting thus increasing patient compliance with treatment plans. 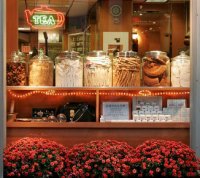 From some of the earliest times in China, the search for longevity took on special cultural importance, with famous stories such as the Qin Shi Huang Di, the first emperor of a united China, expending great resources to find immortality elixirs by sending expeditions in search of Peng Lai, the mountain where immortals held the secret elixir of longevity.  Over time practices of macrobiotic hygiene, e.g. sexual yoga, dietetics, breathing exercises, and others, became associated with the developing Nourishing Life tradition, the Chinese search for health and longevity.

In Chinese medicine, the emphasis on disease prevention in the search for longevity almost defines the core tenets of the tradition.  The Si Qi Tiao Shen Da Lun (四氣調神大論, Su Wen Chapter 2) admonishes that the “sage will prevent disease rather than cure it, maintain order rather than correct a disorder.” (是故聖人不治已病,治未病,不治已亂,治未亂).  The first chapter of the Su Wen, the Shang Gu Tian Zhen Lun (上古天真論), is almost entirely about longevity methods.

One common method of the Nourishing Life traditions is the ingestion of special herbal medicines.  In particular, highly concentrated forms of herbs such as Dan (丹), specials tablets containing rare herbs or minerals, are emphasized in disease prevention.  In general, aqueous decoctions and powders effect more the upper jiao and are best in treating acute or exterior patterns.  Herbal formulas that undergo a process of concentration, such as tablets, medicated liquors, or medicated syrups, have a greater affinity with the lower jiao and affect a better storage of qi and blood.  Thus, these formats, like Dan, are suited for long-term administration in disease prevention.

Jia Jian Fu Yuan He Zhong Gao is an example of a medicated syrup prepared for Ci Xi.  Its ingredients are primarily qi and blood tonics that focus on the spleen and kidney.  The instructions call for the formula to be ground and then prepared in sugar or honey for daily ingestion.

Adjunctive herbal therapies in modern clinical practice expand the Chinese medicine practitioner’s therapeutic repertoire and allows for a better ability to help patients prevent disease.  For more information on medicated syrups, and other herbal preparations of the Nourishing Life tradition such as medicated liquors and congees, please join us at the TCM Kongress.

[Henry McCann, DAOM, LAc, is on faculty at the Pacific College of Oriental Medicine (USA) and is the head lecturer for the Cork Institute for Post Graduate Acupuncture (Ireland).  He also teaches doctoral candidates at the Oregon College of Oriental Medicine (USA).  Dr. McCann finished his doctoral degree in geriatrics of Chinese Medicine and is an expert on the Nourishing Life tradition and the treatment of chronic recalcitrant diseases.  He maintains a clinical practice in New Jersey.]

Rena Reese is the Founder of Soul Salon International, an inspirational multimedia company,author of several inspirational titles and the host of The Soul Salon radio show. SSI offers coaching, consulting, books, and classes to support the physical and spiritual wellness of clients. Additionally SSI offers blog/web-design, fundraising support, and publishing as well as promo videos.
View all posts by Rena Reese →
This entry was posted in Uncategorized and tagged Medicated syrups, Tips of Yang Sheng. Bookmark the permalink.