There is an old saying in tai chi that says, “The first 10,000 times don’t count”. You should expect that you need to practice your forms that many times to move through these stages. There are no shortcuts. You can read about it. You can think about it. But in the end, tai chi is an experiential exercise. You have to do it.

In general terms, there are three stages of development of your taiji practice.

Stage 1 – practice your external movements so that they are done with correct posture, pacing, and direction of vision.

Stage 2 – practice how energy is stored and delivered in each form.

Stage 3 – practice moving your qi to where you are delivering energy. 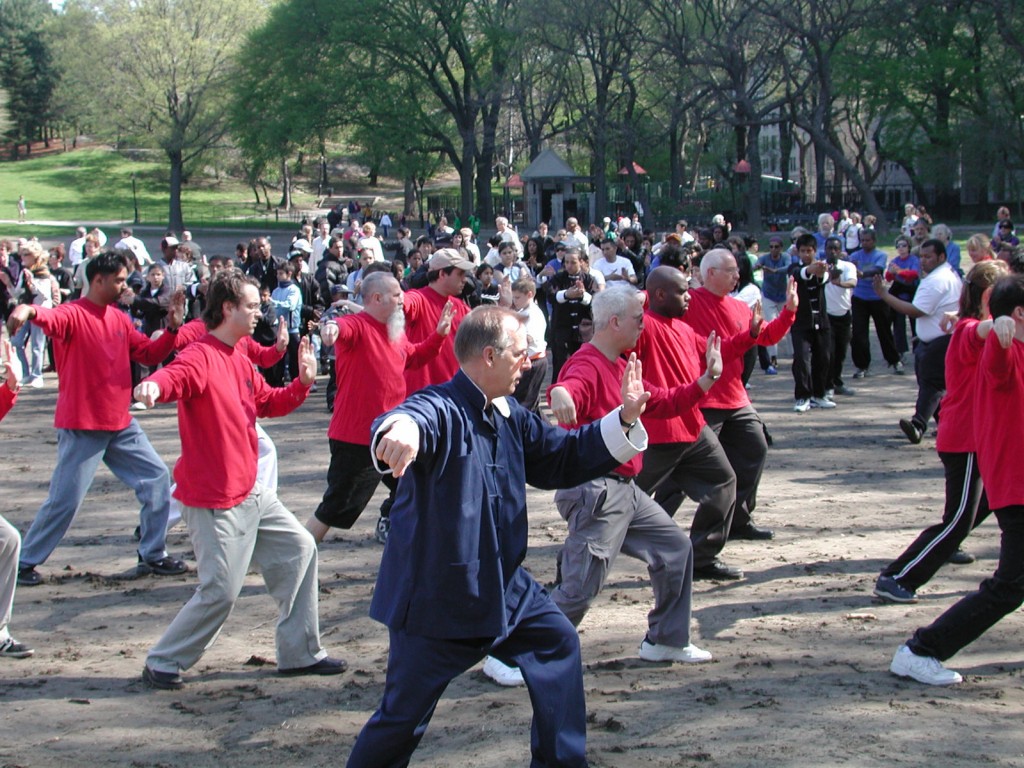 Stage 1 – practice your external movements so that they are done with correct posture, pacing, and direction of vision.

It is important to practice your form at this stage until the movements and postures are automatic. This is the easiest stage to learn, but it can be very frustrating for beginners. Everyone else seems so fluid and graceful. It takes time to get past the negative self image and learn to enjoy the movement.

Most teachers and videos do a pretty good job of explaining the movements of a taiji form or set. However, there are many subtleties that can only be learned from a teacher. If you have access to a good teacher, great. Enjoy it and learn lots.

If you do not, do the best you can with videos, books, and other resources. Choose a common form so that you can find an occasional workshop. I recommend either the Yang 24 (Beijing) forms or the Taiji for Arthritis from Dr. Paul Lam Taiji for Health Community. There are many good weekend workshops available.

There are a few simple things that you should know as you begin your practice.

Take your time and learn methodically

Learning faster is not necessarily better. Work through learning the forms at a steady pace and take your time in understanding the details. It’s better to learn a few forms or sets well than lots of them carelessly. Plan on learning only 1 or 2 new forms each week

Estimate your greatest ability to perform an exercise. Practice at only 70% of that level. This is not a competition. If it hurts, stop immediately. Apply this rule to everything in taiji, from how far you stretch, to how many repetitions, and to how long you practice. As you become more familiar with the forms and with your own body, you can gradually increase this number.

Another way to think about controlling your movements is to work on body alignment. Being upright is very important, but it is not as simple as it seems. A way to approach it is to think of your spine as a string. Imagine gently stretching the string from both ends. Being upright provides the internal organs with more space. An upright body also strengthens the internal deep stabilizer muscles. Try to keep your body upright and supple throughout all the movements. Be especially aware of this when you start bending your knees because your alignment can change. When you bend your knees, imagine that you are sitting down in a straight chair (not the recliner!) and keep your back fairly straight. Use a mirror or video camera to check yourself while practicing.

Practice a little each day

Ten minutes of practice each day will bring you better results than practicing for an hour at a time once a week. You will find that taiji is more challenging than it looks. If you need a break, take one. Frequently, take time to review what you have learned. As you learn the basics of your forms, you will want to practice quite a bit more than ten minutes.

Start to learn the essential principles of taiji. Read Yang Chen Fu’s Ten Essential Principles and start to incorporate them into your practice. Most of them won’t make much sense yet, but that’s OK. Keep returning to them and it will become more clear in time.

As you continue to practice your taiji, you will find that you gradually develop these skills. As you start to get a better understanding of what each form is intended to do, you will eventually start to move into Stage 2 without even being conscious of it.

Stage 2 – practice how energy is stored and delivered in each form.

In Stage 2, study each form in detail and understand the intentions. Most of my experience in is Yang style, so this explanation will follow that experience.

Even the simplest forms have several (many) parts to learn and master. It is a big oversimplification, but we can say that the seven things to focus on at this point are 1) what your feet are doing, 2) what your hands are doing, 3) what your waist (body) is doing, 4) what your eyes are doing, 5, yin and yang, 6) opening, and 7) closing.

1) What is your stance? What are your feet doing? There are many stationary stances, from horse stance with equal weighting on each foot; to bow stance, with the 70/30 weight ratio (brush knee); to empty stance, where essentially all your weight is on one leg (playing lute); and T stance during transitions (fair lady works shuttles). In addition, you should become familiar with dropping stance (snake creeps down) and centering stance (golden rooster stands on one leg). The stance is important in delivering energy (power) during each form.

3) The waist is the part of the body above the hip bones and below the diaphragm. The waist can be moved independently of the hips in some forms. In general, most forms have turning movements. The waist should lead the movement of the arms and the rest of the body. This increases/improves the delivery of energy.

4) During most forms, your eyes should follow your hand(s) during movement. When your hands are moving separately, your eyes should follow the dominant hand. The dominant hand is the one that is delivering energy. This is usually the higher hand or the one that is the most forward. For example, during brush knee, the hand that pushes forward is dominant and should be followed with your eyes. The hand that brushes the knee is not dominant. However, this statement is a little misleading. Your eyes really should be looking “through” your hand at a point beyond the hands to where you want your energy to be delivered.

6) Every form has an open. This is the part of the form where power is developed and stored. Think of it as a bow and arrow. Pulling on the bowstring is opening and storing energy. For example, during brush knee, one hand goes back while the other one is placed somewhere near your elbow. This is the opening where you are storing energy.

In general, you should inhale sometime during opening movements. Chen Jin, a Chen-style taiji master, wrote that when you are opening, you are solid outside and soft inside. You can feel your body soften as you inhale and expand your abdomen.

7) Every form has a close. This is the part of the form where power is delivered. Again, think of it as a bow and arrow. Releasing the bow string is closing and delivering energy. For example, during brush knee, one hand goes forward while the other one brushes past your knee. This is the closing where you are delivering energy.

In general, you should exhale sometime during closing movements. Chen Jin, a Chen-style taiji master, wrote that when you are closing, you are soft outside and solid inside. You can feel your inside harden, or become more solid, when you are delivering energy as you contract your abdomen.

In summary, continue to learn the essential principles of taiji. Read Yang Chen Fu’s Ten Essential Principles and start to incorporate them into your practice. They should be starting to make more sense now. Keep returning to them and it will become more clear in time.

Stage 3 – practice moving your qi to where you are delivering energy.

In Stage 3, you begin to learn to use your intent to direct the flow of qi through your body. Mental focus is essential to this step.

The next phase of understanding open and close, as described in Stage 2, is to start moving your qi as you open and close. When you open (inhale), move your qi from your dan tian, through your perineum, and up your yang meridian (along your spine) toward the bai hui point at the crown of your head. When you close (exhale), move your qi down your yin meridian (the front center of your body) to the lower dan tian.

Keep your mouth gently closed with your tongue touching your upper palate. It may take a long time (years) to become comfortable with this. It is important that you do not force your breathing here. If you are not sure where to be inhaling and exhaling or you get tired, just allow your body to breathe naturally.

There is a statement in the taiji classics that says something like, “The mind (intent) moves the internal energy and the internal energy moves the body.” This is an important principle, but it is difficult to learn. It is important to practice your way through the three stages of development before you can really understand intent.

Intent is discussed in Yang Cheng Fu’s Ten Essential Principles of Taijiquan, where he says, “use intent, not muscular strength.”. Intent has 3 common meanings in taiji practice. First, intent means thoughts or expectations. Second, intent means qi or internal energy. Third, intent means to be aware of and pay attention to your own internal strength.

The emphasis on intent is important in taiji because the use of strength is very different than other martial arts. Taiji uses slow, soft force to deflect or divert an opponent’s energy instead of meeting force with force. This allows time for your mind to contemplate the movement and imagine the movement in your mind before your muscles actually move.

When you are practicing taiji, move slowly and continuously and use intent to move beyond the physical part of the form. This helps to develop a strong mind-body connection. Qi gets stronger as it continues to flow, just like the force of water gets stronger as it flows downhill. If you stop moving during the forms, your qi also stops moving.

Eric Borreson – a student and teacher, finds teaching tai chi, qigong, and meditation to be a path to a more meaningful life. Eric is the founder and director of Meditation in Motion, specializing in teaching about living healthier and happier lives. He is a Master Instructor in the Therapeutic Tai Chi system. He teaches tai chi and qigong at the prestigious Heartland Spa, a top 10 destination spa, in Gilman, IL. In addition, he teaches tai chi (Therapeutic Tai Chi, Yang 24, Dr. Lam’s Tai Chi for Arthritis, and Dr. Lam’s Tai Chi for Diabetes) at other venues. He teaches private lessons on request. He writes a weekly wellness column at http://eric-taichi.blogspot.com.

Eric Borreson - a student and teacher, finds teaching tai chi, qigong, and meditation to be a path to a more meaningful life. Eric is the founder and director of Meditation in Motion, specializing in teaching about living healthier and happier lives. He teaches tai chi, qigong, and meditation at the prestigious Heartland Spa, a top 10 destination spa, located in Gilman, IL. In addition, he teaches tai chi (Yang 24, Sun-style tai chi, and Dr. Lam’s Tai Chi for Arthritis and Tai Chi for Diabetes) at other venues. He conducts workshops and teaches private lessons on request. He writes a weekly wellness column at http://eric-taichi.blogspot.com.
View all posts by Eric Borreson →
This entry was posted in Meditation in Motion and tagged energy, movement, Qi, stage of development, taiji. Bookmark the permalink.

One Response to Meditation in Motion