Gravity – the force of no force “Every object in the universe attracts every other object along a line of the centers of the objects, proportional to each object’s mass, and inversely proportional to the square of the distance between the objects.” Issac Newton 1643 – 1727

This law sounds pretty complicated. Don’t worry. As taiji practitioners, we only need to know that everything falls down towards the centre of the Earth at a constant acceleration, about 32 feet per second per second.

Apples fall, rocks fall, students fall; even masters fall; and all fall at the same speed – 32 feet per second per second. Gravity works on all things and knows no discrimination. The reason we don’t fall into the centre of the Earth is because we stand on solid ground with correct body structure. If a student leans his body forward too much, he will fall down. If a master makes the same mistake, he’ll also fall down.

Understand this and you will know the art of leading your opponent to fall into emptiness. (落 空)

Here’s the secret: For example, when your opponent attacks with a double push to your shoulders, do not fight back. Instead, use your hands to receive his attack in a calm and soft manner. Relax your shoulders and allow gravity to drop your elbows down. When your elbows fall down, your opponent will fall with you. It’s that simple; both you and your opponent are governed by the same gravity. The main key is: with, but not against. No jin is necessary.

In fact, you must not use jin (force) at all, because jin is anti-gravity. All our lives we are fighting against the gravitational pull of Mother Earth. There is not a moment we can get away from gravity. Gravity is what stops us from performing levitation. A person jumps from a tall building to kill himself is performing suicide by gravity. Gravity doesn’t hurt him. He was killed by a great impact against the ground when his body hits the ground. Mass times acceleration. 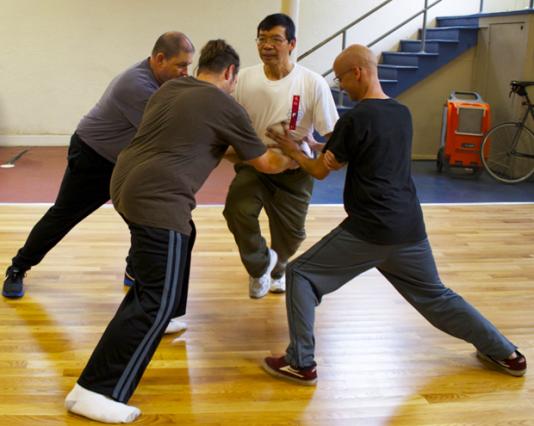 Rooting is the art of wu-wei (non-doing). By relaxing your body you will be connected with Mother Earth. No force is needed. We cannot use force to achieve rooting. We use force to move. Rooting means to be still, not moving.

Also, remember this principle: with, not against. This means not to push against your opponent when he pushes you. Instead you should try to accept his push and make a good contact with him. Again, remember: with, but not against. The goal is to become one with your opponent. When that happens, there will be no push, only stillness. If you and your opponent push against each other, this is called double-heaviness, or force against force. This is a struggle and the stronger force wins.

The rhythm of yin and yang
When your opponent pushes, he is in the yang mood. If you push back, you are also in the yang mood. This is no good, because it is double yang. Both of you will be too busy. When your opponent pushes you, you should use gravity to achieve rooting. When you feel the stillness between the two of you, counter his attack by using any yang move. You can uproot him easily.

According to Dao De Jing, stillness means returning to the root. This verse obviously indicates that gravity is the same as stillness. It’s the gate to all wonders. In fact, many mysterious writings of the taiji classics all refer to gravity. They were written by masters who didn’t know physics. They tried very hard to tell us this message without really understanding the concept of gravity.

We know physics. Shouldn’t we use physics to explain taiji? We might be able to push taijiquan to a higher plateau. Then we will be taiji masters of the West.

The ancient Chinese believed that taijiquan is a martial art for scholars, or intellectuals. They believed that all scholars would strive hard to know the true meanings of nature.

And, like the good book says: The truth shall make you free! 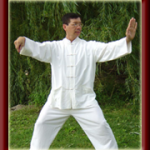 Chun Man Sit – born in 1950s in southern China, his family moved to Hong Kong when he was six years old. He lived in Hong Kong for twenty years and in 1976, he moved to the United States. Master Sit began his martial arts training in 1969 and has studied and practiced continually for forty years; learning many styles such as Karate, Tai Chi, Qigong and Kungfu. He is an expert on Wu style Taiji, Tai Hui Six Elbows Kungfu, and many Qigong methods, including 6 Healing Sounds, Drifting Cloud Moving Qigong, Nei Gong, Silk-reeling Gong, etc. Master Sit has been a chief judge in many national Tai Chi and Kungfu tournaments in the United States of America for the last 18 years and has taught Tai Chi, Qigong, and Kungfu workshops. His articles appear regularly in Tai Chi and Kungfu magazines and he is currently writing a book on Tai Chi. Master Sit and his wife Mary Ann, live in Overland Park, Kansas.

This entry was posted in From the Master and tagged gravity and rooting, gravity the force of no force, in yang rhythm, there is no jin. Bookmark the permalink.