There are two types of energy within each person. They are known as masculine and feminine, and often incorrectly thought to be men and women, separately. Throughout the past few hundred years, societies have evolved to escape the idea of separateness, and to foster both types of energy within each person. This is reflected in written laws, in the workplace, in media, and entertainment. When we look at ads or articles from decades ago it’s comical how skewed they were as compared to today.

In the most basic form, the energies are: 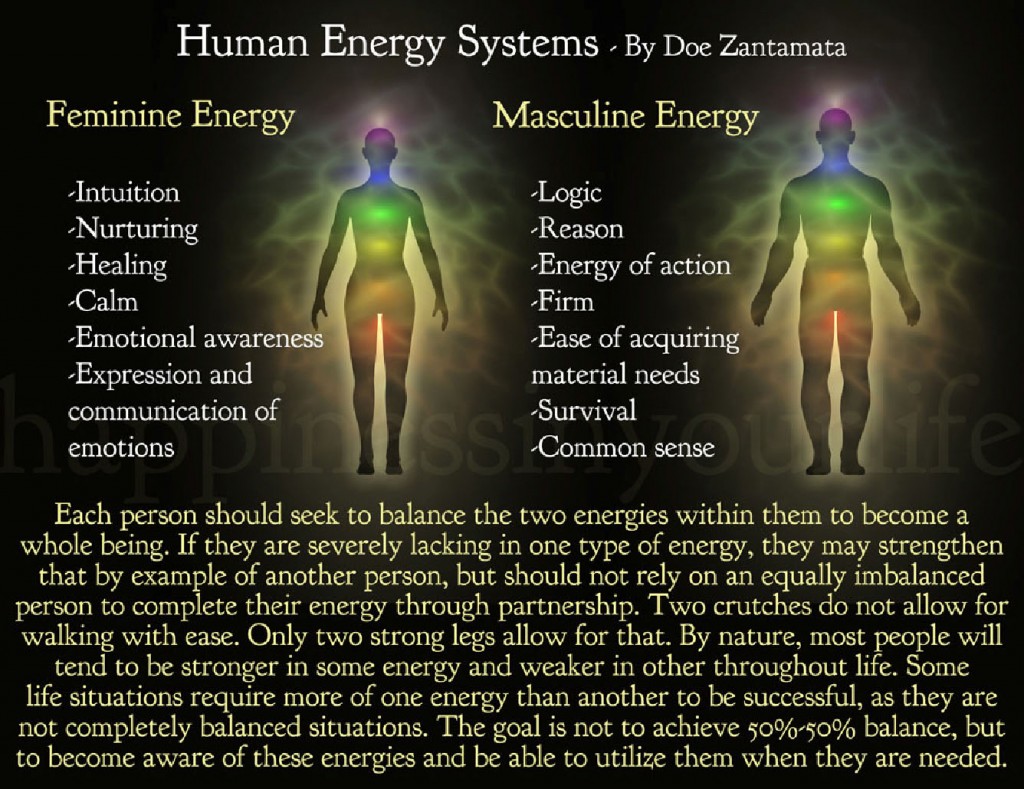 Benefit: Free to give and receive love, depth of all types of relationships result.

Masculine energy: asserts self easily and without fear

Benefit: Free to ask without reservation for what is needed in the material world. Success, business, promotions and financial gain result.

One with a strong female energy but lacking an adequate male energy needs to be able to assert the self, or risks the build up of anger and frustration. This has a pressure cooker effect, which seems unnoticed until it boils over. The only time this type of person will be able to assert themselves will be accompanied by the anger and frustration, and once it’s out, they will feel remorse and may even take back some of the words they spoke that communicated their actual needs. Thus, the pressure cooker restarts.

Worst case scenario, the woman, or person with the lacking male energy, has given absolutely everything and cannot provide for herself. She may even become impoverished and even still has trouble asking for help.

Where did it start? In childhood. This was learned mainly through dolls. You take care of this, clothe it, care for it, and it will never ever say thank you, nor do anything back. There was no such thing as a girl action figure. Girls had Prince Charming who was to rescue the princess, and they would live happily ever after.

One with a strong male energy but lacking in female energy needs to be able to express feelings without deflecting or sarcasm, or risk build up of those emotions. Without effectively expressing emotions, it can lead to emotional breakdowns or becoming completely cold and devoid of emotion altogether. Worst case scenario, pent up hurt emotions lead to nervous breakdown when internalized, or  uncontrolled release of anger against society as a whole, which can be expressed as a rampage of violence. Emotions cannot be bottled up or they too will result in a pressure cooker effect, but this effect with emotions (not needs as with the female) is much more damaging and dangerous.

Where did it start? Again, in childhood. “Big boys don’t cry.”  Competition, cars, sports, action figures. Tough is good. Win the fight. Get the best cars. Be above others. There are only winners and losers.

Think of stereotypes. Things are changing, but women have made greater strides so far.

It wasn’t too long ago that the term “career woman” was thought to be cute. “Working mother” was out of the norm.

Think of single mom versus single dad. Single mom carries with it a note of irresponsibility, whereas single dad seems like a hero. Why one thought to be irresponsible but the other is not? Both are doing the job of two people by themselves.

Housewife became stay at home mom. Stay at home dad still isn’t totally accepted. There may be a question, why doesn’t he work? 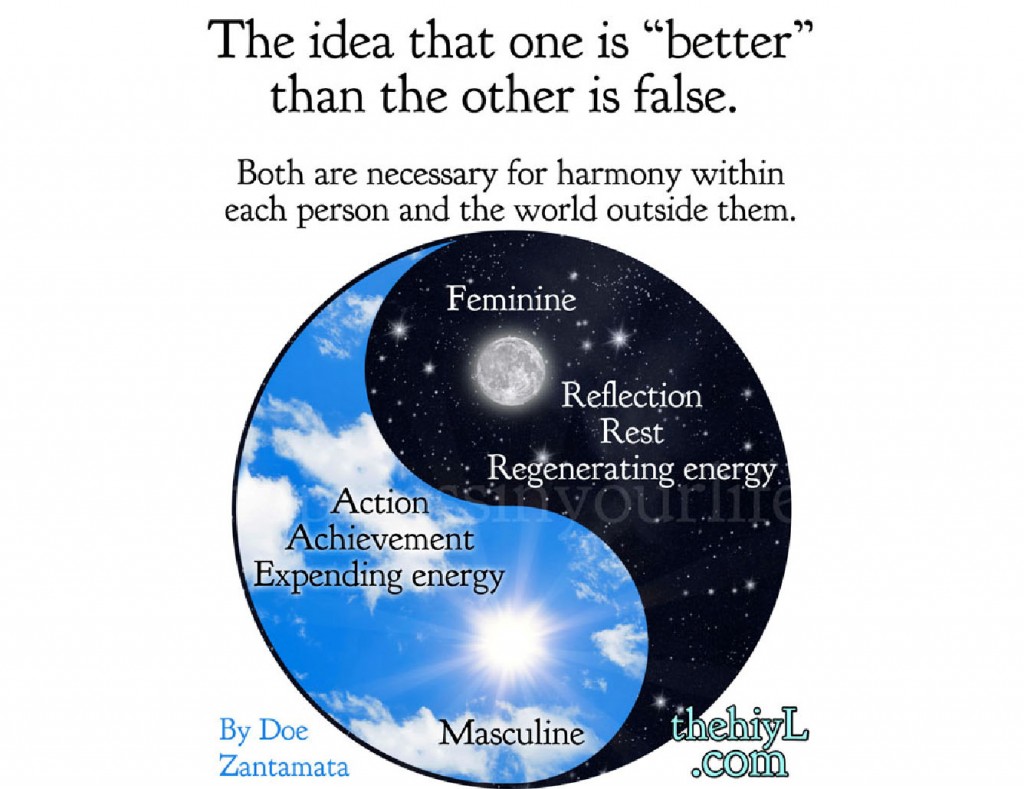 Immaturity in relationships isn’t so much immaturity, but lack of development. Women are thought to be “more mature” than men in relationships, but that’s where their focus was. Nurturing, emotions, caring, consideration, are all based on feminine energy.

By the same token, a woman starting her own business is becoming more prevalent, but it still seems a scary thought for many women, no matter how much they love what they do. Men have had this focus for longer, but that doesn’t make women more immature in business…just less developed.

Anything is possible for both. Children 30 years ago were still raised in different ways, but nowadays, this is different. While their choice of toys and stories may not seem like such an enormous life-shaping process, it truly is.

We teach them what their roles and goals should be, what they should hope to aspire to.

If a man has always had a stronger feminine energy, he would not feel happy or satisfied in life or in a family where he’s expected to be the breadwinner and his wife gets to do the child-rearing all day. If a woman never had an inkling of wanting a family, or wanted one but would want the husband to be the one to raise the children while she works, she should not feel like she’s setting herself up to be a bad wife or a bad mother, or that she should have to choose between one or the other. She should just choose a partner more compatible for her dreams and goals, a man who wants the same things.

We feel attraction for many types, but we can only feel true love for one who balances us and is compatible in the long term. Very few people are 100% completely balanced, but tend toward more masculine or more feminine in energy. They should not feel like they have to conform or change to what the other expects. While they should seek to foster the lacking energy within themselves, they should also realize that attraction and love can be felt for a person who would not be a great long-term partner in life for them.

As partners are mirrors, one who is completely lacking in one energy but is evolving will find that his or her mirror was at one time exactly who they needed, but as time went on, became “too” much of what they were developing within them. This is what’s often deemed “outgrowing” a relationship.

Each person who we are in a relationship with is at some points a teacher, at some points a student, and no time is ever wasted. We can see ourselves, but we can clearly see ourselves through the mirror of a relationship. Throughout the process of growth, if the relationship is no longer beneficial to either person, they should not (as they often do) try to go back in time and unlearn those things they learned which made them no longer compatible just so they could still be together. In those cases, growth occurred separately but together. 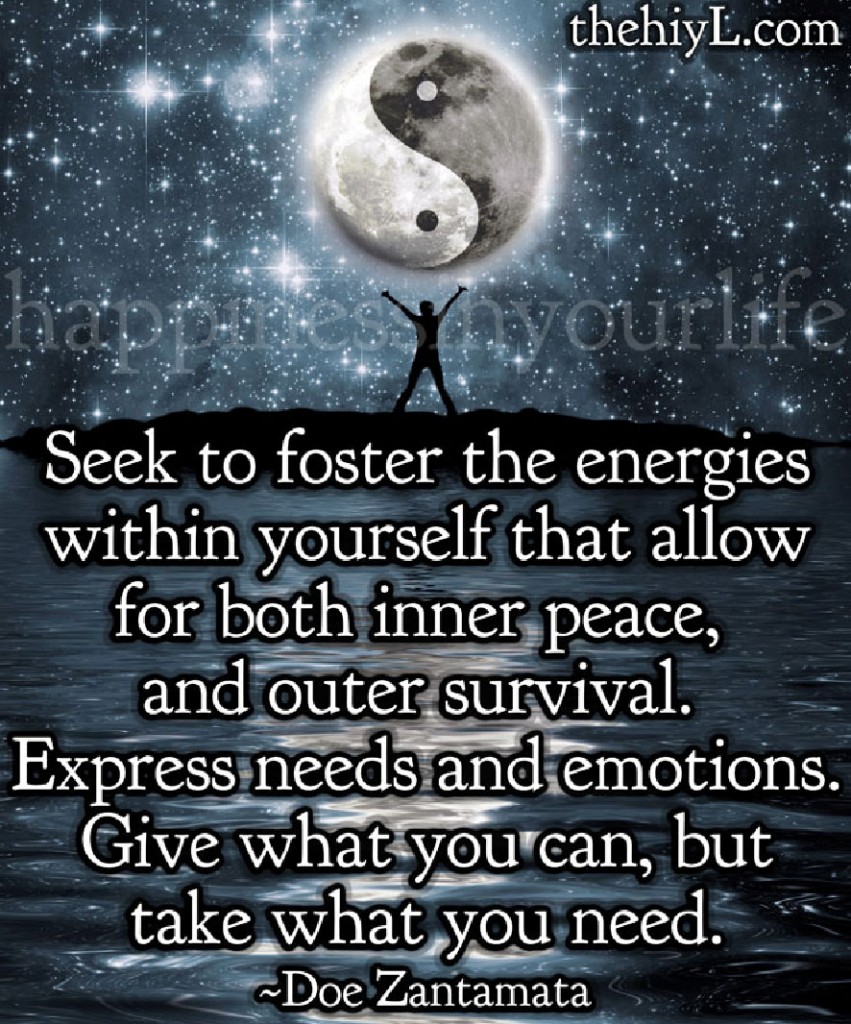 In other cases, couples work with each other so that both grow. That relationship, over time, leads to both partners evolving emotionally together, and strengthens their bond as a couple. They go from being two mutually imbalanced partners, to two more balanced partners. Once they’ve invested the time into bettering themselves through each other, they find they no longer argue about what they used to argue about, and they have an open communication system in place with one another for both needs and emotions.

Ideally, all partners would seek to be the type of couple who grow together. But some people do not grow at the same pace as others, and some believe they are in their correct role in life and do not wish to “grow” at all. They believe that’s how men are supposed to be, or that’s what women are supposed to do, and that’s that. Although we may really wish to have someone see that balance is better, we cannot convince another to do what they do not believe they want to do. They may realize it later in life, or they may find an equally imbalanced partner who also does not want to change or evolve emotionally, and the two would continue in a co-dependent relationship as they would find that missing energy only in the other, never believing they have the ability to find it within them. 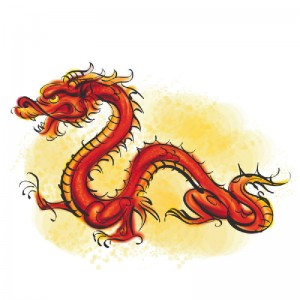 [Doe Zantamata is an inspirational author, photographer, and graphic designer.  Happiness in Your Life is made up of a book series, daily motivational blog, animated short movies, and inspirational posters. There is a little something for everyone. Whether a person is enduring trying times, or has decided to fully live their dreams, thehiyL seeks to fan that inner spark within all of us, and help us to realize our full life potential. Happiness in Your Life is written by Doe Zantamata. Please visit the daily blog for articles and web posters at www.thehiyL.com or please visit www.happinessinyourlife.com to learn more about the books and printed posters.]
Do you like this? Please share it:
Tweet

This entry was posted in Happiness in Your Life and tagged energy, female, feminine energy, human, male, masculine energy, relationships. Bookmark the permalink.