It’s a cool, rainy June morning in the mountains in Massachusetts and a warm breakfast is on my mind. I have a yin belly – meaning my digestion is on the slow side, my stomach and belly are touchy and don’t like to digest hard, cold, thick or slimy things after fasting all night [break-fast, get it?] So the all-American breakfast of boxed cereal with a banana and cold (soy) milk won’t cut it. An egg and toast isn’t too bad, but I like a whole grain bread for fiber to help my belly move debris along, and sometimes it’s overwhelming first thing for my sluggish digestion. Eggs too can be tough to digest and are a highly concentrated form of protein. Oatmeal sits like a rock in my stomach. What I found works best, I discovered in China.

Congee as some in the West know it or xifan (稀饭) and zhou (稀粥) in Mandarin, chuk or jook in Cantonese — is the perfect food for mornings. When I first arrived in China in September, 2008 I saw a huge pot of xifan every morning at the dining hall where I was teaching.  I was completely uninterested. It looked like watery rice—bland, tasteless and completely unappealing to my Western eyes. For a month I watched as the Chinese teachers scooped what looked like dishwater and soggy rice into their metal bowls. Instead, I grabbed a fried egg and bao [soft steamed buns] and was mollified. 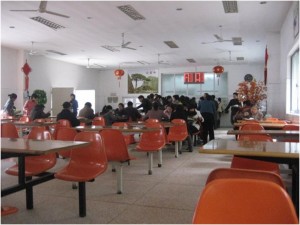 Curiosity got the better of me. One month of eating with the other teachers, served three Chinese meals a day in the dining hall — I had to try new things. I started slowly and was usually pleasantly surprised with the new (to me) dishes—sliced celery and smoked tofu, seaweed soup, tomatoes and scrambled eggs, peanuts and potatoes with Szechuan peppers.

Breakfast was still a mystery though. In America, breakfast was my favorite meal. Even with a slow digestion, I liked to eat my largest meal at breakfast and my smallest meal at dinner [motto: eat breakfast like a Queen, lunch like a Princess and dinner like a pauper.] The classic Southern Chinese breakfast served every morning at the dining hall had things I was mystified by or couldn’t stomach or wouldn’t [I’m a vegetarian].

On the dining hall menu each morning – a huge pot of xifan, plain white rice and water, another huge pot of rice porridge with pumpkin or corn added, trays of steamed buns, corn, rice, mixed corn and rice and plain rice buns with meat or preserved veggies inside. On the hot table were trays of noodles and vegetables or meat [too greasy for my taste first thing], fried eggs, boiled eggs, steamed purple yams, steamed pumpkin, and fried breads (yutiao) and others that looked like a Chinese version of a donut. 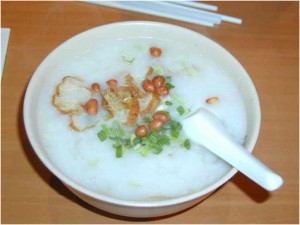 At the end of the table were two trays of preserved vegetables – a scary looking pile of oily, unidentifiable fermented vegetables that everyone spooned on top of their xifan or put onto their trays like a side dish. There was no salt or pepper on the table; I saw most teachers pour soy sauce onto their fried eggs and into bowls of soft tofu (doujiang) that they sprinkled with chopped scallion.

What was I going to eat? I had to experiment.

The weather goosed my courage. It became damp and cool in October. Early one chilly morning, I had to have something warm. I grabbed a metal bowl and scooped the water and droopy rice. I went back to the table and tasted. It was bland and weird. Then I saw the other teachers – into their xifan they stirred fresh, steamed pumpkin and a spoon of the fermented vegetables. I needed my breakfast to last through four hours and two teaching periods. I had to find something that was nutritious and filling. I went back up to the table and poured another bowl of hot xifan. This time I took some pumpkin and a spoon of the least offensive looking fermented vegetables and went back to my table.

Feeling a little hopeless by how it all looked, I took a spoonful. It was delicious. The warm rice turned out to be soothing, bland and gentle on the belly. The pumpkin added sweetness and substance and the preserved vegetables added a satisfying (and surprising) crunch and saltiness. Somehow the flavors were wonderful together, especially with a bite of bao or fried bread. I was hooked and happy.

I did some research and discovered xifan/jook isn’t just delicious, but is good for you as well [like many Chinese dishes] – especially depending on what you add to the porridge. I eat rice porridge most mornings, as I mentioned, for my slow digestion. I add minced 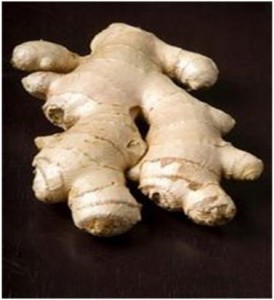 ginger and scallion to add heat to my belly. Some days, I’ll add a half of a steamed yam or sweet potato and when I can get it in the fall, I’ll add steamed pumpkin – my favorite. Sweet potato, yam and pumpkin are especially good for women, they have fiber, beta-carotene, vitamins A and C, potassium, other minerals and some say plant or phytoestrogens.

The softly cooked rice, sometimes left over rice from the night before, is boiled until the grains “open up like flowers” (hua kaile) making them large, soft and easy to digest.[i] It doesn’t take long. I start with a half cup of dry organic, long grain (dami) rice, pour into a sauce pan and add three or four cups of water depending on how much broth I want with my rice. I add some salt and turn on high heat until boiling. Skim off the starch that begins to form on top and turn the heat down to simmer. The rice, to my taste only needs to cook for 10 to 15 minutes more to open and ‘flower.’

Meanwhile I chop up the ginger – about the size of the top of my thumb – and one scallion white and green into slivers and set aside.

When the rice is done, I turn off the heat, skim any residual starch off the top and let sit a minute or two to absorb more water. Then I scoop the whole thing into one big bowl sprinkle the ginger and scallion on top and grab a spoon. In about five minutes I can begin to eat the steaming hot zhou. For me, I can feel it nourishing my insides, moistening and warming and building a fire in my digestion. I feel more satisfied after my big bowl of zhou than I do after any breakfast I’ve ever had. It also sets my digestion on the right track for the rest of the day.

I miss preserved vegetables. Now back in America, I haven’t found where to get my daily ration. The Chinese usually home-make their condiment and my favorite is mustard green and secondly green bean. In Hangzhou I was gifted with a large jar of the fermented green beans from my Mandarin teacher. They were made by her mother and were the best I’d ever eaten. Just the right amount of spices and not at all oily. Unless you have had them, there is no way to describe them — there is a sweetness, a heat, saltiness and a lively crunch. As they are fermented, they carry bacteria and enzymes that facilitate digestion. What’s not to love?

Some of my students wonder about whether the white rice – which has a high glycemic index – spikes my blood sugar. I’ve had blood sugar problems since I was 14 years old, but my years in China and my regular regime of good food and daily exercise seem to have sent the condition packing. My blood sugar is steady throughout the whole morning and I don’t have cravings for sweet or salty foods as I sometimes will after eating cold cereal, breads or eggs for breakfast. No cravings for hours after I eat usually means I’ve had wholesome, nutritious food without additives or chemicals. It also means that I am free to eat because I am hungry, not because I’m compelled by allergies to sugar, wheat or flour. It’s great being off that vicious cycle. 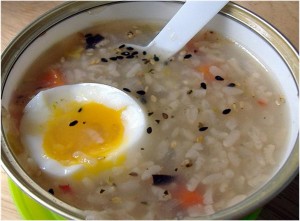 Why Is it So Good?

For 14 years I’ve studied Western herbs, mostly in the Wise Woman tradition and Eastern herbs and Traditional Chinese Medicine for the last five years. Both traditions believe that healing should first begin with food and diet.[ii] So it makes sense that much of the Chinese diet has a basis in healing.

Traditional Chinese Medicine (TCM) has separated foods into how they taste (flavor) sweet, sour, pungent, etc., and how they act on the body- are they warming or yang or cooling and yin, among other actions. Rice is considered sweet in flavor and neutral in terms of temperature or yin and yang. Rice promotes the rising of clear chi or qi (life force) in the body as it fortifies the spleen and stomach. It quenches thirst, promotes good digestion, relieves mental depression and stops diarrhea.[iii]

But porridge in China can be made with other grains as well, millet and corn for example and some add beans and meat or vegetables, each item strengthening a different part of the human system. I add ginger (sheng jiang) which has a pungent flavor and slightly warming action on the spleen, stomach and lung; while scallion or green onion (congjingbai) is also pungent and warm in nature, acting on the same organ channels. For my yin belly, rice and ginger and scallion are moistening, warming and comforting.[iv] If I add yam or pumpkin or sweet potato (hong shu or nanguo or yu tou) the porridge will also be warming and fortifying for the stomach and spleen.

Using the understanding of TCM and western herbs we can add and change the action of the neutral zhou/jook/xifan on our bodies as needed. In fact at one time, before I understood the action of porridge, I was instructed after a fast to clean out my body with a soup made of rice porridge and vegetables. The soup was eaten daily for an extended period to clear out my body of toxins, debris and allergies. The result was that my whole system was reset and I began the slow process of returning to health. But that’s another story.

Jessica Sommar, is an author/instructor in Classical Yang Family Style Taijiquan and Daoyin at Kripalu Center for Yoga and Health in the Berkshires. She has trained in Daoist alchemy, Taijiquan fist and weapons forms and daoyin [yang sheng practices] and apprenticed in TCM — acupuncture and eastern herbs for six years, including living two years in Hangzhou, PRC. In the past two decades her training includes western herbs, western astrology, various energy healing modalities and she is a CPE-certified Interfaith Chaplain. She recently graduated as a 200-hour certified Kripalu Yoga Teacher and works as marketing and administrative coordinator for the Kripalu Schools of Yoga and Ayurveda. Learn more about Jessica at her blog mailto:jessinamerica222@wordpress.com or from her Facebook page Jess’ Daoyin & Taijiquan at https://www.facebook.com/#!/pages/Jess-Daoyin-Taijiquan/112494282179657.