Book Review: The Sustainable You

The Sustainable You: Somatics and the Myth of Aging 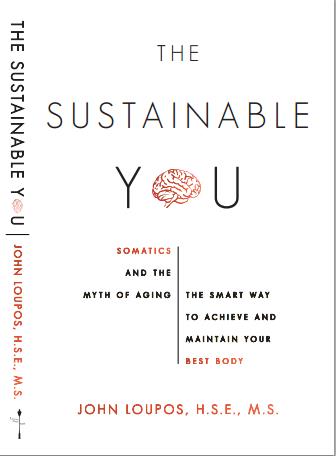 As I picked up the book, I certainly was more than curios to know what somatics is. I received this definition from the Forward by Judith Eve Lipton, M.D. Somatics is “expanding the use of the human brain to improve communication with muscles and the rest of the body, resulting in vastly improved levels of function and pain reduction.”

A logical and reasonable second question I asked was, “What is the myth of aging?” Surely, we age…..or do we? According to Loupos, “…there are certain popularly held misconceptions about aging…” in particular the belief that as we grow older in years, we make assumptions about how we should feel, and those beliefs create our aging experience.

Somatics asks that we take another look at those beliefs and, instead of assuming a physical decline in age, we learn “…how to live in your body in the best and most sustainable way.”  With somatics comes “the understanding that much of the neuromuscular decline normally attributed to aging can be mitigated.” Both the decline and the possible reversal are very thoroughly explained throughout the book both through scientific evaluations and reports of case studies, as well as anecdotal experiences.

Just a few of the people who have benefited from somatics education are a woman who suffered a stroke, a woman who has lived with back pain for over 45 years after twisting her back as a child, a college-age man diagnosed with fibromyalgia and chronic fatigue syndrome, a woman whose knee surgery did restore functionality, a British footballer with a back and pelvis injury, the star runner on a college women’s track team, and the author’s own experience with somatics following his knee surgery.

Also recounted are the experiences of an auto accident victim, another auto accident where the victim suffered whiplash, a case of frozen shoulder, recuperative efforts with elderly clients who’d had surgery, a client with scoliosis, and several cases in which children were helped vit somatic education.

Included in the book is an invaluable section on the practices themselves, eight practices designed to show you how to sense, experience, and evaluate the “muscular nuances involved, as well as the interplay between your intention, your self-awareness, and your breath.”

The exercises address the areas of the back and neck, lower (lumbar) middle (thoracic) and upper (cervical) spine, and include both a physical practice and mindful reflection of the movement.

Mr Loupos is not only certified as an educator in the methods of somatics taught by Dr. Thomas Hanna, he is also a martial artist who has practiced and taught since 1966. His practices include Taijiquan, qigong, several styles of Kungfu, and others. He also has a background in Classical Homeopathy, and conducts seminars on martial arts and on somatics.

This entry was posted in Book Reviews. Bookmark the permalink.

One Response to Book Review: The Sustainable You