Whether we gain, lose or maintain body weight is mainly dependent upon three things: the number of calories required for maintaining life (our metabolism), calories burned through activity, and calories consumed.  The body also uses energy to process food, but this energy factor is difficult to change. 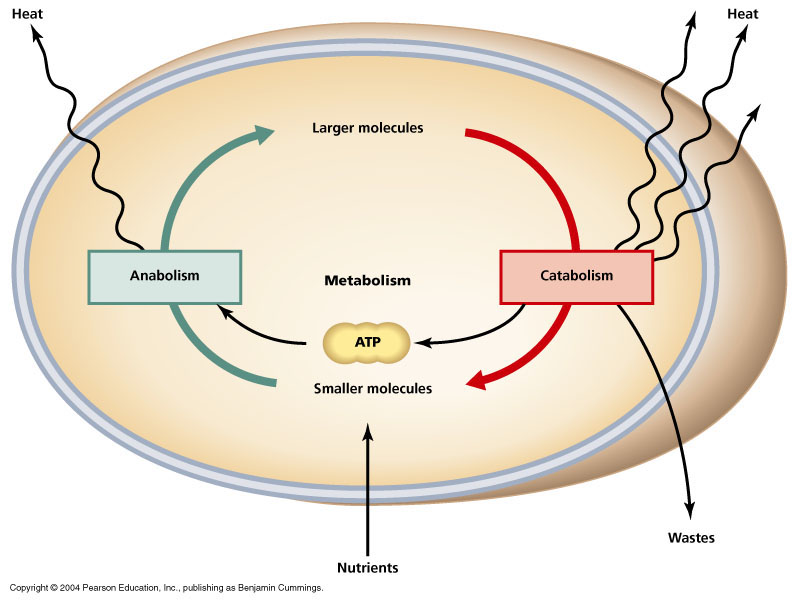 Metabolism from a physiological perspective

Metabolism is the process by which the body converts consumed food and beverages into energy. During this complex biochemical process, calories in food and beverages are combined with oxygen to release energy for bodily functions. Even when resting, the body needs energy for functions such as: breathing, circulating blood, adjusting hormone levels; growing and repairing cells.  The number of calories the body uses to carry out these basic functions is known as your basal metabolic rate, commonly called metabolism.

(1) Body size and composition: Bodies of people who are larger or have more muscle burn more calories, even at rest.  Muscle burns more calories than fat.

(2) Sex: Males usually have less body fat and more muscle than females of the same age and weight and so burn more calories.

(3) Age. In older people, the amount of muscle tends to decrease and fat accumulates, slowing down calorie burning.

Energy needs for your body’s basic functions stay fairly consistent.  They were thought to be difficult to change.  However, a recently discovered breathing technique, described below, can change your metabolism.  The basic metabolic rate accounts for about 60 to 75 percent of the calories burned every day.

In addition to the basal metabolic rate, two other factors determine how many calories the body burns each day:

Many people blame their metabolism for their weight gain.  However, the body generally balances the metabolism depending on its needs. For example, in starvation dieting, the body compensates by slowing down bodily processes and conserving calories for survival. Only in rare cases do excessive weight gain results from medical problems that slow metabolism, such as, Cushing’s syndrome or having an underactive thyroid gland (hypothyroidism).

Unfortunately, weight gain is most commonly the result of eating more calories than you burn, as shown by the following example.

According to Macdonald’s calorie chart the calories in the following foods are: Big Mac 570, Large French Fries 540, Coca-Cola Classic 410, Salad 35 and Dressing 160.  The total calories in such a meal are 1715.  Two such similar meals would contain 3,430 calories.

A 150 lb. person sitting for 15 hours (eating, driving, studying, watching television, etc.) burns an average of about 130 calories an hour.  Hence 15 hours of sitting would burn 1,950 calories.  If you sleep for 8 hours, you would burn about 552 calories. Exercising by vigorous cycling (14- 15.9 mph) for an hour would burn about 704 calories.  Few people can or want to engage in such vigorous exercise. The total calories burned in a day would be 3,104, resulting in a weight gain.

To lose weight you need to create an energy deficit by eating fewer calories, increasing the number of calories you burn through physical activity, or both.  However, as the above example shows, diet and not exercise is the primary factor in losing weight.

Obese people can also lose weight by practicing Senobi breathing, which increases the rate of metabolism.  This breathing technique, which is simple to learn and only requires 1 minute of practice before each meal, is described below.

The Senobi Breathing Method can be done sitting or standing.  The hands are extended above the head with the palms upward. (Fingers are intertwined or not).  Lean back and arch the neck backwards.  Inhale for 5 seconds and then exhale for 5 seconds.  Repeat this breathing cycle 6 times.  This is done before every meal.  Use abdominal breathing as described in the next two paragraphs. 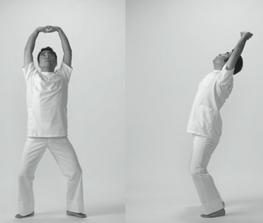 The study (1) found significant losses in body fat after 1 month of regular practice.  Using various measures researchers found substantial up-regulation of sympathetic nerve activity and increased urinary hormone secretion after 1 min of the Senobi breathing method.  They did not find these results in the non-obese control group.

Psychological factors can also be involved in obesity such as: stress, depression, poor food choices, not realizing the discrepancy between calorie intake and calories burned by activity, etc.  Practicing additional abdominal breathing for relaxation and stress relief and reflecting on the food you eat may lead to additional weight loss.

Asthmatic patients were asked to engage in the Senobi breathing exercise regularly for 1 month.  At the conclusion of this month the majority of patients showed a decrease in use of their inhalers and showed an increase in expiratory volume.  Senobi breathing is thought to activate the sympathetic nervous system thus opening airway passages.

Obese individuals have an increased risk of developing depression. The study (3) showed that after one month “Senobi” breathing could relieve depression, especially in obese women.

Hopefully, these applications of Senobi breathing will sway readers to consider that strenuous, and endurance exercises are not necessary for health improvement and can be harmful.  Simple activities like walking, gardening and housework can improve and protect your mental and physical health (4).

Senobi breathing is a simple form of Qigong.  Qigong (pronounced Chee Kung) is an ancient Chinese body/mind/ breath activity, which has been shown to help about 200 diseases, ranging from the common cold to cancer.  Dr. Oz, heart surgeon and star of th Dr. Oz show stated that if you want to live to be 100, practice Qigong (4).

By profession, Dr. Eisen was a university Professor specializing in constructing mathematical models such as those in cancer chemotherapy and epilepsy. He has studied and taught Yoga, Judo, and Aikido. Dr. Eisen was the founder and chief-instructor of the Shotokan Karate Clubs at Carnegie-Mellon and Dusquene Universities and the University of Pittsburgh. He helped teach Yoga in Graterford prison. His curiousity about the relation of Qi to healing and martial arts led him to study TCM, Tai Chi and Praying Mantis Kung Fu. He was initiated as a Disciple of Master Gin Foon Mark. Dr. Eisen now teaches (at his Kwoon and by webcam), writes and researches Praying Mantis, Qigong and Yang Tai Chi - see http://home.comcast.net/~carolezak
View all posts by Martin Eisen →
This entry was posted in Experience Exchange and tagged Experience Exchange, Marty Eisen, Qigong, Weight Loss. Bookmark the permalink.