Bifurcating from H 5 (Located with the palm facing upwards, on the radial side of the tendon of m. flexor carpi ulnaris, 1 cun above the transverse crease of the wrist.), it connects with the Small Intestine Meridian.  About 1.5 cun above the transverse wrist crease, a branch follows the Heart Meridian and enters the Heart.  Then it runs to the root of the tongue and connects with the eye (See Fig. 6).

Originating from SI 7 (1, 2), it connects with the Heart Meridian.  Another branch ascends, crosses the elbow and connects with Jian Yu (Shoulder Bone, LI 15:  antero-inferior to the acromion, on the upper portion of m. deltoideus. When the arm is in full abduction, the point is in the depression appearing at the anterior border of the acromioclavicular joint.) See Fig. 7.

(i) The Kidney Collateral Meridian

It branches from K 4 (Posterior and inferior to the medial malleolus, in the depression anterior to the medial side of the attachment of Achilles’ tendon.), crosses the heel and joins the Bladder Meridian.  Another branch ascends, following the Kidney Meridian to a point below the Pericardium and then spreads into the lumbar vertebrae. See Fig. 9. 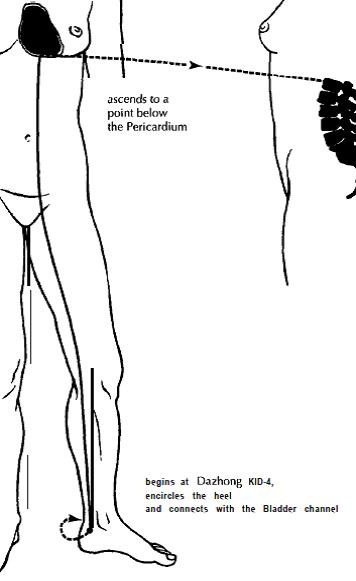 It begins at Neiguan P-6 (2 cun above the transverse crease of the wrist, between the tendons of m. palmaris longus and m. flexor radialis.), on the anterior of the forearm, ascends along with the Pericardium main Meridian to the Pericardium and then connects with the Heart, as shown in Fig. 10.

It arises from SJ 5 (1, 2), ascends the posterior aspect of the arm and runs over the shoulder the shoulder.  Then, it disperses into the chest meeting the Pericardium Meridian, as shown in Fig. 11.

Begins at G 37, joins the Liver Meridian and disperses over the dorsum of the foot, as shown in Fig. 12.

Separating from Ren 15 (On the midline of the abdomen, 7 cun above the umbilicus and 1 cun below the sternocostal angle.), it spreads over the lower abdomen, as shown in Fig. 13.

Originating from Du 19 (On the midline, midway between the tip of the coccyx and the anus.), it ascends on both sides of the spine to the nape of the neck and spreads over the top of the head.  At the scapular region it connects with the Bladder Meridian and spreads through the spine (See Fig. 14.).

5. Shi (Excess or Full) and Xu (Deficient or Empty) and Symptoms in Collaterals

Shi and Xu are concepts used in diagnosis in Chinese medicine. They are distinguished by the presence or absence of a Pathogenic Factor (Interior or Exterior) and the strength of the Antipathogenic Qi, that is all of the body’s energetic resistance (3,7). The distinction between Full and Empty is made on the basis of observations of signs and symptoms of clinical manifestations.

A Full condition is characterized by the presence of a Pathogenic Factor and the fact that the Antipathogenic Qi is strong. The resulting battle results in pathological changes which produce various symptoms and signs.

An Empty condition is characterized by weakness of the Antipathogenic Qi and the absence of a Pathogenic Factor. This includes deficiency of Yin, Yang, Qi, Blood, Essence, Body Fluid, and hypo-function of the Zang Fu Organs.

There are also mixed conditions of Full with Empty, Empty with Full and Empty and Full (7).

The symptoms of Full and Empty conditions of the Collateral Channels appear in Table 3.

Table 3: Symptoms of Full and Empty Conditions of the Collateral Channels

6. Treating Disorders of the Yin/Yang Related Channel or Zang Fu with Luo points

The Guide of the Classic of Acupuncture contains the statement that if the Luo points are needled, then symptoms of the Yin/Yang related Channels can be treated. Acupuncturists use these points to treat disorders of the corresponding Channels and Zang Fu and also their related Yin/Yang Zang Fu and Channels. The following examples illustrate their use. (a) L 7 treats headache, neck pain, Wind affecting the head. The effectiveness of this point is explained by the pathway the Lung Luo Channel which runs into its paired Channel the Large Intestine.
(b) LI 6 treats acute edema, when External Wind disrupts the Lung’s regulation of the Water Passages.
(c) S 40 assists in the transformation of Phlegm, accumulating when the Spleen dose not perform function of transformation and transportation properly.
(d) Sp 4 harmonizes the function of the Spleen and Intestines (which are governed by the Spleen) and so treat upper (Stomach) and lower (Spleen) abdominal Pain.
(e) H 5 can treat enuresis due to the accumulation of Heat in the Bladder. Heat can transform from the heart to the Small Intestine and then to the Bladder.
(f) SI 7 can regulate and calm the Spirit of the Heart and so can treat many psycho-emotional problems.
(g) B 58 can treat Kidney Deficiency and Cold in the lower body (lumbar pain, weak and cold legs etc.) and also Yang Uprising in the Bladder Meridian (dizziness, heat, headache, etc.).
(h) K 4 can be used for enuresis (Excess) and lumbar pain (Deficiency).
(i) P 6 is well-known for treating nausea and vomiting. Both the Pericardium and its Yin/Yang related Triple Heater Meridian descend through the three Heaters which reinforces the ability of P6 to treat Middle Heater problems.
(j) SJ 5 is only used for tightness and oppression of the chest, the sole indications of the paired Triple Heater and Pericardium Meridians. However, in clinical practice SJ 5 and P6 are often joined by through-needling for chest pain which radiates to the back.
(k) G 37 is used frequently in the treatment of eye disorders from a disharmony of the Liver.
(l) Liv 5 is used for swollen testicles, persistent erection (Excess) and sudden itching of the genitals (Deficiency).

Additional treatment properties of the Luo points can be rationalized by knowing the regions reached by their Luo Channels, as discussed in the following examples.
(a) L 7 is used to treat thumb disorders because its Luo Channel is distributed over the thenar eminence.
(b) LI 6 is frequently used tom treat ear problems (e.g. tinnitus and deafness) since its Luo channel ascends to the ears.
(c) S 40 is indicated for a painful or swollen throat (with or without sudden voice loss) and a plum-pit throat, since its Luo Channel terminates in the throat.
(d) Sp 4 can treat disharmonies and pain in the intestines and Stomach since its Connecting Channel enters the abdomen and connects with these Organs.
(e) H 5 treats speech impairment, especially after a stroke, and a stiff tongue since its Connecting Channel reaches the tongue.
(f) K 4 is used in the treatment of agitation of the Heart with Fullness and vomiting, restlessness and palpitations, since its Connecting Channel terminates just below the Pericardium.
(g) Liv 5 is used to treat disorders in the region of the genitals, since its Luo Channel ascends there.

By combining a point on a Yang channel with another on its paired Yin channel, the cumulative effect is greater than needling either point separately. Frequently used combinations of this type are between the Yuan (Source) point on the channel primarily affected by a disease, and the Luo (Connecting) point on the paired channel. In this combination, the Source point is called the Host and the Connecting point the Guest. The idea behind this form of combination is to divert excess energy from the diseased organ to its paired Yin/Yang related Channel. Stimulating the Host point drains an overactive Organ, since Source points are in close relation to their Organ. The stimulation of the Luo point of its paired Meridian, ensures that the excess Qi would leave through the closest possible point, since Luo points form a passage between two Yin/Yang paired meridians. Some examples are:
(a) LI 4 (Source) and L 7 (Luo) – sore throat, nasal congestion, colds and respiratory flu. This combination is used for the invasion of Pathogenic Wind. LI 4 expels the Pathogen and L 7 assists in dispelling the Pathogen and restoring the Disseminating and Descending functions of the Lungs.
(b) L 9 (Source) and LI 6 (Luo) – acute upper body edema, absence of sweating and difficult urination. The root of this pattern is Lung Deficiency and so Pathogenic Wind can disrupt the function of the Lungs, especially in the upper body. LI 6 Opens and Regulates the Water Passages and is used when Pathogenic Wind disrupts the Lungs’ function.
(c) Sp 3 (Source) and S 40 (Luo) – phlegm. Spleen Deficiency is the root cause of the formation of excessive phlegm. S 40 resolves phlegm and Sp 3 Tonifies the Spleen.
(d) H 7 (Source) and SI 7 – psycho-emotional issues. H 7 calms and Regulates the Spirit and is aided by the strong action of SI 7 on psycho-emotional disorders.
(e) KD 3 (Source) and UB 58 (Luo) – lower back problems, weakness in the lower limbs. These problems are the result of Excessive Yang rushing upwards because it is not rooted because of deficient Kidney Yin. KD 3 benefits Kidney Yin and UB 58 decreases Excessive Yang.
(f) LV 3 (source) w/ GB 37 (luo) – eye problems. These are caused by LV disharmonies, such as, Deficient Blood or Yin or Liver Fire. Recall that the Liver opens into the eyes. LV 3 is used for these Liver Organ disharmonies and GB 37 benefits the eyes.

7. Use of Luo Points for Psycho-Emotional Disorders

The Luo points in table 4 are used frequently in the treatment of such problems.