[You may want to read the previous articles on this topic before you read the third one in this series.  here is the link to 13(a) and 13(b).] 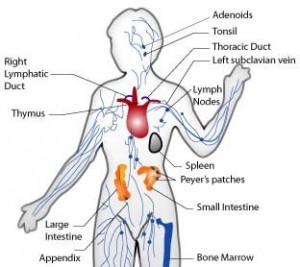 1. Effects of Qigong on the Immunity

An introduction to the immune system appeared in 13(a) and 13(b). Early research on the effects of Qigong concentrated mainly on the examination of blood, especially with reference to the numbers, proportions, and morphological features of the formed elements (hemograms). The white blood cell count of subjects that was normal or low increased after Qigong practice. In particular, the percentage of lymphocytes, white blood cells that originate from lymphoid stem cells, was elevated. The phagocytic power of granulocytes was strengthened. The activity of saliva muramidase (also called, lysozyme, which damages bacterial cell walls) was enhanced (1, 3, 4). The serum total complement and the C3 level was also increased (2,3,4).

Further research showed that Qigong had a homeostatic effect on immune function. After practicing Qigong, the elevated white blood cell count decreased for appendicitis patients, while the low count increased to normal for cancer patients, who had undergone radiotherapy and chemotherapy (5).

Qigong also influences the immunoglobulin (2) content. After practicing Qigong for three months, the average increases were: serum IgG by 288mg/ml, IgA by108 mg/ml, and IgM by 108 mg/ml (5). Another report showed that saliva SIgA rose significantly, while a high level of IgG normalized after Qigong practice (6).

Cellular immunity was also affected by Qigong practice (8, 9). In one study, the lymphocyte transformation rate increased by1.1% after three months of doing Qigong.

A wreath is 1 tumor cell joined to 3 or more erythrocytes or red blood cells (rbc’s). It is an example of an immune complex, interlocking antigens and antibodies (2). Under normal conditions soluble immune complexes bind C3b and C3b binds to CR1 receptors on red cells. Breakdown of C3b generates a fragment (C3d) that binds to antigens enhancing their uptake from the bloodstream by macrophages in the spleen and Kupffer cells in the liver. In some circumstances, immune complexes continue to circulate. Eventually they become trapped in the tissues of the kidneys, lung, skin, joints, or blood vessels. Their final disposition probably depends on the nature of the antigen, the class of antibody, and the size of the complex. There they set off reactions that lead to inflammation and tissue damage (2).

Another study, conducted on 30 cancer patients after they had practiced Qigong for 30 days, revealed the following averages. The wreath rate of rbc’s C3d rose from 8.40% to 12.40%, while the wreath rate of erythrocyte circulating immune complexes dropped from 10.95% to 6.41%. In addition, the reducing power of neutrophilic granulocytes increased by about 24% and phagocytocis improved by 18%.

The Leukocyte Adherence Inhibition (LAI) Test is a test for cell-mediated anti-tumor immunity and related serum blocking factors based on the finding that leukocytes from cancer patients, but not from controls, when mixed in vitro with antigenic extracts of tumors of the same histological type, undergo a decrease in their normal adherence to glass surfaces. Adherence to the endothelium of the vasculature is important so that phagocytic cells can get to the site of the tumor or pathogen (2). The LAI test declined from 72.5% before Qigong practice to 52.16% after practice (8).

Another clinical study of cancer patients (10) found that Qigong practice significantly increased their rbc’s C3b and rate of lymphocyte transformation and phagocytosis.

Other research revealed that the activity of natural killer cells was enhanced and the level of interferon increased (1,2) after Qigong practice (7, 9).

DHEA is an endogenous hormone made from cholesterol and secreted by the adrenal gland. It is the most abundant steroid in the body and has many beneficial effects including improving immunity (11). DHEA serves as precursor to male and female sex hormones (androgens and estrogens). DHEA levels in the body begin to decrease after age 30. Low levels have been found in some people with anorexia, end-stage kidney disease, type 2 diabetes (non-insulin dependent diabetes), AIDS, adrenal insufficiency, and in the critically ill. DHEA levels may also be depleted by a number of drugs, including insulin, corticosteroids, opiates, and danazol.

The effectiveness of a vaccine depends upon our body’s ability to generate a vigorous antibody response when the vaccine is given. This response recurs if the infection for which the vaccine was given recurs again and so helps the immune defense. The response to vaccination declines with age. Dr. Raymond Daynes, of the University of Iowa, found that aged mice could generate an immune response to a vaccine similar to that of a young mouse when given DHEA. Dr. Barbara Araneo, also at the University of Utah, found that severely burned mice healed more quickly when given DHEA.

Dr. Shealy has tested hundreds of subjects and concluded that when DHEA levels are too low a patient will have renal exhaustion, or already have or be developing illness (12).

In Traditional Chinese Medicine the Brain is known as the Sea of Marrow. Jing produces Marrow. Kidney Jing is associated with sexual function. DHEA is found in the brain and the adrenal cortex and is related to sexual vitality. DHEA might be useful as a modern scientific explanation of some properties of Jing.

In one study (15), Dr. Irwin and associates recruited 36 subjects, all of whom were at least 60 years old and had chickenpox earlier in life, but not shingles. Half of the patients were randomly selected to participate in a tai chi group and the remaining and acted as a control group. A simplified form of Tai Chi, tai chi chih (TCC), was used. It consisted of 20 simple, repetitive movements, designed for older adults. TCC was practiced three times a week for 15 consecutive weeks, for a total of 45 sessions.

There were increased levels of memory T-cells in the TCC group . On average, the scientists found “a nearly 50 percent increase” of varicella virus responder cells in TCC patients from the start of the study to the one-week post-TCC period. Physical improvements also were noted in the TCC patients.

Another study by Dr. Irwin et al. (16), concluded that Tai Chi may help older adults avoid getting shingles by increasing immunity to varicella-zoster virus (VZV) and boosting the immune response to varicella vaccine in older adults. Tai Chi alone was found to increase participants’ immunity to varicella as much as the vaccine typically produces in 30- to 40-year-old adults, and Tai Chi combined with the vaccine produced a significantly higher level of immunity, about a 40 percent increase, over that produced by the vaccine alone. The 25 week studies also showed that the Tai Chi group’s rate of increase in immunity was double that of the health education (control) group. The Tai Chi and health education groups’ VCV immunity had been similar when the study began. In addition, the Tai Chi group reported significant improvements in physical functioning, bodily pain, vitality and mental health. Both groups showed significant declines in the severity of depressive symptoms.

Previous studies have suggested that Tai Chi may improve immune function. The study (17) was intended to examine whether 5 months of moderate Tai Chi and Qigong (TQ) practice could improve the immune response to influenza vaccine in older adults. It concluded that traditional TQ practice improves the antibody response to influenza vaccine in older adults. However, further study is needed to determine whether the enhanced response is sufficient to provide definitive protection from influenza infection.

Exhaustive exercise can be associated with short-term immune suppression, but moderate exercise such as Tai Chi (TC) has been shown to have beneficial effects on immunity. The mechanisms for the health benefits of exercise remain to be determined, and no potential biomarkers for these beneficial health effects have been identified. This study (19) investigated serum proteomic markers in individuals participating in TC exercise. It was found that there was an increase in complement factor H associated with a decrease in complement factor B. Complement factor H is involved in protection from microangiopathy and macular degeneration and may represent a useful marker of the health effects of exercise.

A recent article (20) reviews the current knowledge about Tai Chi to better inform clinical decision making for rheumatic patients. Thus, despite some limitations in the evidence, the author concludes that Tai Chi can be recommended to patients with osteoarthritis, rheumatoid arthritis, and fibromyalgia as a complementary and alternative medical approach.

Effects of Tai Chi on the immune system are also discussed in (21).

5. Zheng, R. Analysis of the effect and principle on the treatment of 100 tumor samples with combined Qigong therapy. Thesis of Colloqium on Qigong in the Health System in East China, 1986

By profession, Dr. Eisen was a university Professor specializing in constructing mathematical models such as those in cancer chemotherapy and epilepsy. He has studied and taught Yoga, Judo, and Aikido. Dr. Eisen was the founder and chief-instructor of the Shotokan Karate Clubs at Carnegie-Mellon and Dusquene Universities and the University of Pittsburgh. He helped teach Yoga in Graterford prison. His curiousity about the relation of Qi to healing and martial arts led him to study TCM, Tai Chi and Praying Mantis Kung Fu. He was initiated as a Disciple of Master Gin Foon Mark. Dr. Eisen now teaches (at his Kwoon and by webcam), writes and researches Praying Mantis, Qigong and Yang Tai Chi - see http://home.comcast.net/~carolezak
View all posts by Martin Eisen →
This entry was posted in Scientific Qi Exploration and tagged immunity, Qigong, research. Bookmark the permalink.

One Response to Scientific Qi Exploration-13(c)- Qigong and Immunity