Wuqinxi, or Five-Animal Play is one of the important Qigong exercises in traditional Chinese wellness practice. Its founder, Hua Tuo (about 145-208), was born in Qiqiao County, Peiguo (now Bozhou, Anhui province) at the end of the Eastern Han Dynasty. He wrote a lot works in his life, but they were all lost in the history. The current biographies of The Chinese Classic and the Secret Biography of Dr. Hua Tuo are all done by using his name. 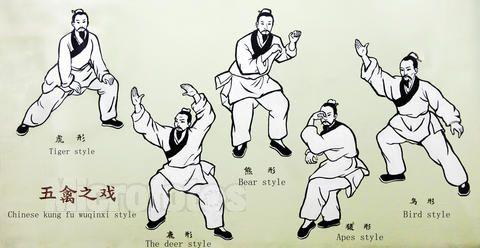 Hua Tuo created the Five-Animal Play based on the “Two-Animal play” in Zhuangzi. According to Hua Tuo’s Biography of Fangshu in the Book of the Later Han dynasty, “I have an art called the Play of five animals: the tiger is one, the deer is two, the bear is three, the ape is four, and the bird is five. They can be used to eliminate disease, and to benefit the foot, as a guiding exercise. When the body has not been feeling well, start to make an animal play, happy but sweat, because of the power from the animal, the body is light and wants to eat. By practicing it, one was more than ninety years old; his eyes and ears were wise and his teeth were firm.”

In 2001, after the establishment of the Center for Health Qigong Management in The General Administration of Sports of China, Shanghai Institute of Sport commissioned the digging, sorting and research of Wuqinxi (Five-Animal Play), and compiled the Health Qigong Wuqinxi, which was published by People’s Sports Publishing House in 2003. “Health Qigong • Wuqinxi” its action choreography, reflecting the order appeared in 《Three Kingdom》, which is the tiger, deer, bear, ape and bird; the number of action in accordance with the description of Tao Hongjing’s Record of Nurturing Spirit and Prolonging life. Every play has two actions, a total of ten actions. They simulate respectively the tiger’s brave and strength, the deer’s ease and comfort, the bear’s calmness and stable, the ape’s dexterity and flexibility, and the bird’s lightness and quickness, making every effort to contain the spirit of “five animals”. 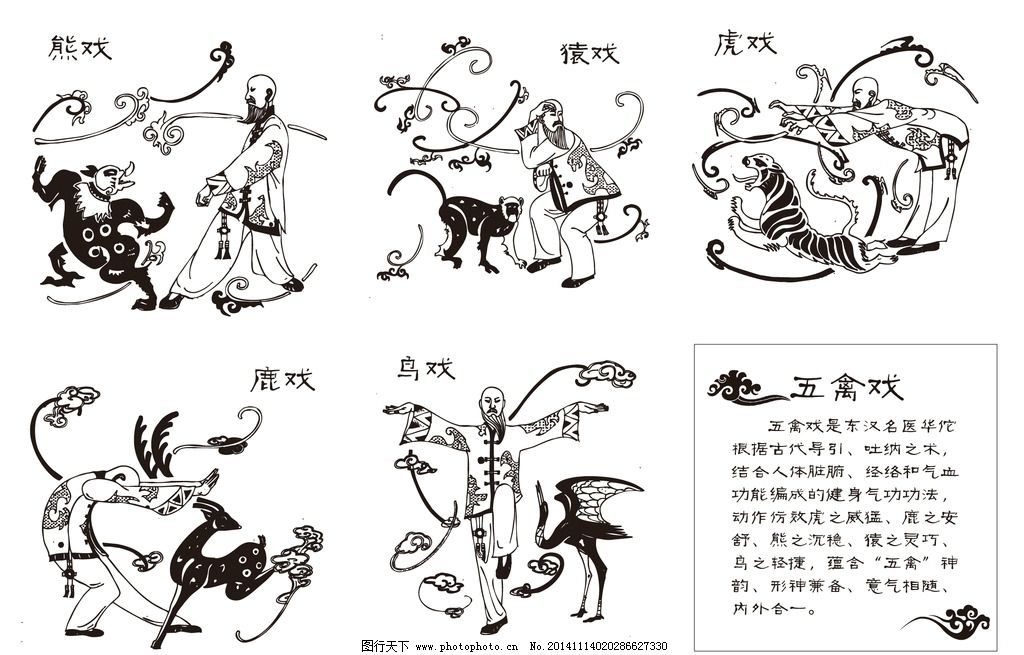 Wuqinxi reflects the full life state of the five kinds of animals, their variation in living habits, posture, as well as the Yin-yang characteristics, such as tiger’s strong and masculine, deer’s The quick and alert, ape’s clever and dexterity, bear’s calm and steady, and the crane’s easy and lightness. To follow their posture and actions can make each part of body getting relatively good exercise, which can improve the organ functions insides, and strengthen the body, muscle andbone outsides, so as to help the qi-blood circulation within meridians and blood vessels, improve digestion, absorption, diet and appetite; improve the disease resistance ability. Practice of Wuqinxi can enhance physical fitness, anti-aging and prolong life. The best example of this technique is showed by Hua Tuo, a legendary physician, and his disciple Wu Pu, both of whom were nearly 100 years old with strong and vivid facial features. 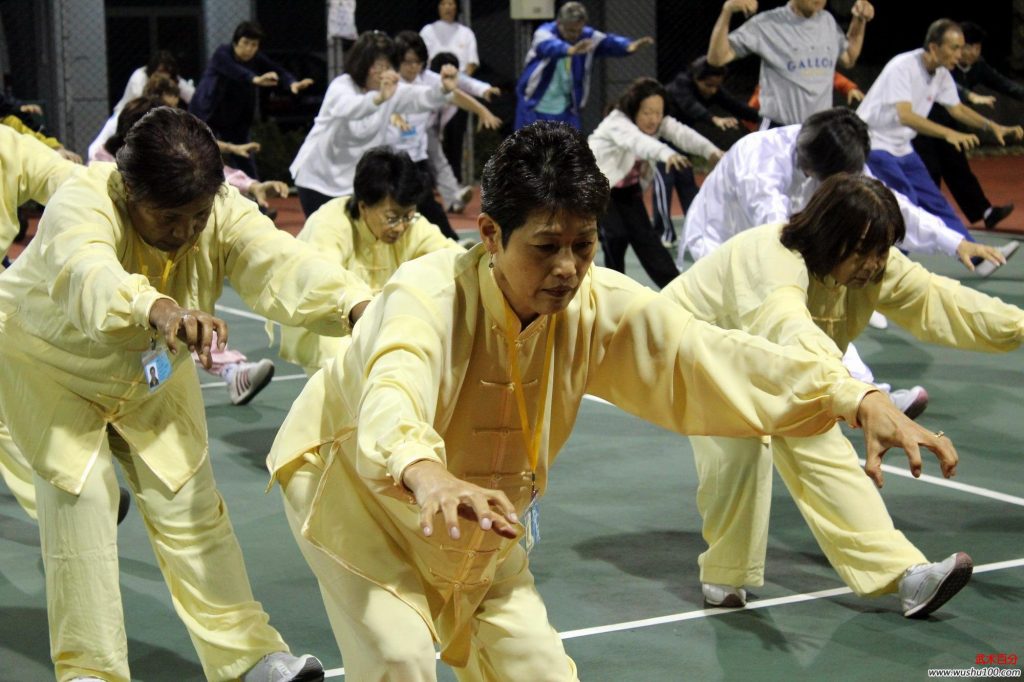 Wuqinxi imitates the movements of five small animals, the key posture of the tiger, deer, bear, ape and crane, so as to greatly improve the functions of the five organs and viscera. So, what are their connections with the body’s five viscera system? There are many schools or theories in the Wuqinxi exercise, and their views are not consistent. Here is a detailed description of one of them to help reader to practice Wuqinxi better: 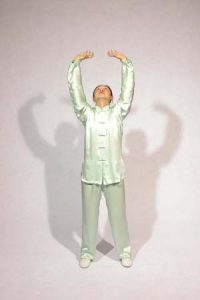 Tiger play: Tiger belongs to water in five elements, mainly train bone and kidney. Tiger is characterized by powerful body fierce, imposing masculine qi, spirit shown in the eyes, braveness in the claws. Tiger play takes the characteristics of the masculine qi, using claws, shaking head and tail, to mobilize the body movement, mainly imitate the tiger’s fierce, so as to promote the development of the body. Practice tiger play by moving outside while quiet inside, meaning to keep mind at Ming-men. Traditional Chinese medicine believes that the kidney supports bone, is the root of original qi. Mind stay at Ming-men can strengthen bone marrow and activate kidney qi, which is called innate qi. Frequent practice of tiger play can benefit qi and tonify kidney, strengthen waist and bones, and expand lung qi. When exercising the tiger play, pop your eyes to strengthen your kidneys. Long-term practice can channel the Du meridian (GV), when Du vein open and all arteries and veins open, you will be full of energy. 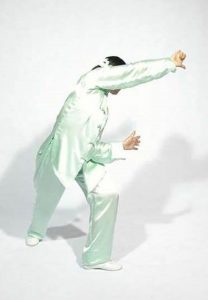 Deer Play: the deer belongs to wood, mainly train tender and open liver. Deer prefers playing athletic, good at using tail, neck, spiced jump; deer play mainly imitates deer frolic gambols, moving whole body joints. Practice of deer play needs mind leading the qi, qi stores at dan-tian, so as to quickly disperse overflow, spread to all parts of the body, cooperate with breath, blood flow while qi move, as Hua Tuo pointed out, when blood-qi flow through no disease could be born. In traditional Chinese medicine, pain is often caused by blocked qi, and pain is generally not happen with flowing qi, referring to whether the blood is smooth. It can strengthen brain and kidney, strengthen physical strength, stretch tendons and relax bones, calm liver and relax gallbladder, dredge meridians and collaterals, harmonize qi and blood, prevent and cure lumbar spine strain, hepatitis, cardiovascular and cerebrovascular diseases. The eyes of the deer, its vision is squint; squint is like secretly looking at people. The deer is squint, squint acts on the liver, called dredge liver qi, regulate lung qi, cooperate with each other, function with each other. 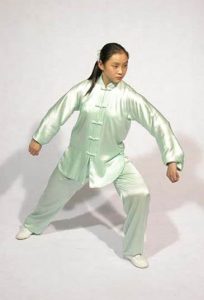 Ape play: ape or monkey belongs to fire, mainly train the brain and heart. The nature of ape is like moving not like quiet, good at climbing, jumping, hiding. Imitate the ape’s jump up and down, left and right looking at the action, keep mind at Lao-gong point. Externally exercise the flexibility of body, internally exercise the turbulence of restraint sentiment. Ape practice heart, mind-heart control blood-vein. Practice of ape play can nourish the heart and brain, become healthy and wise, dreg blood and enhance spirit, prevent forgetfulness, cerebrovascular disease, cerebral thrombosis, anemia, etc. 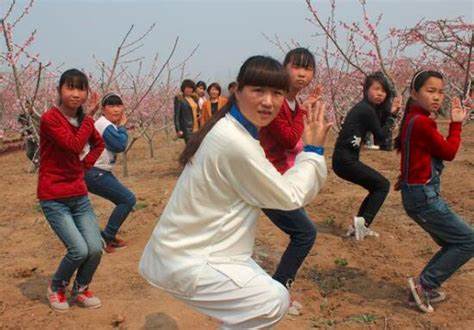 Bird play: The bird belongs to metal, mainly train skin and lung. Here bird refers to a kind of long-lived bird represented by crane. Its limbs are light, good at migration, good at flying high, and enjoy quarrel, with a high degree of balance. To imitate the movement of spreading wings to fly and keep mind at “Qi-hai point” (lower dantian), it can regulate qi and blood, increase vital capacity, enhance lung function, dredge channels and collaterals, and flexible joints. The eyes of the crane is always looking around, moving, looking around, and what is the function of the eye of the bird? It is the function of the lungs. 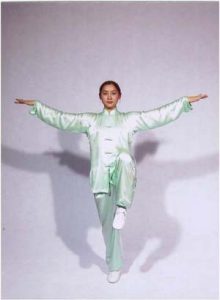 When it ACTS in conjunction with movements, such as flying crane, when it is lifted, all the viscera rise up, when it falls down, all down, and return to normal. Such an upper and down, open and closure, the internal organs especially the lungs play important function. Practice of bird play can improve lung function, strengthen muscle surface, nourish Yin and moisten lung, clear heat and relieve heat, open chest and regulate qi. With possible healing and prevention from tuberculosis, night sweats, arthritis, heart tingling, wheezing cough, etc.

If you are interested in learning and practicing the Five-animal Play with us, please join our Weekly Qigong for Health class online by Zoom, every Wednesday evening 7—8:30pm, or every Sunday morning 8—9:30am in October and November of 2020.
https://www.eventbrite.com/e/dr-chens-weekly-online-qigong-for-health-a-zoom-based-event-tickets-101852467472

Or email to Allwyn at alja78@aol.com for more details.

For more information about Dr. Chen’s online Qigong for Health, please go to: