Standing Like a Tree! What is this Standing Practice?

Standing Like a Tree! What is this Standing Practice?

Recently I’ve been doing a lot of standing practice and it came to mind to write an article on what exactly is standing practice (Zhan Zhuang). This is definitely one of the greatest gifts from the internal practices. So simple and yet so powerful. It is a way of developing better balance and alignment, stronger legs and waist, deeper respiration, acurrate body mindfulness and tranquility. In “Standing Post” (Zhan Zhuang) one meditates while standing holding certain prescribed postures observing the natural flow of the breath what could be simpler and yet  profound in more advance practice. There are several advantages to this over seated meditation in that the mind will remain more alert and one is likely to lose balance if one is not alert. The feet and legs are naturally open and extended promoting free blood circulation and actually improving blood circulation. 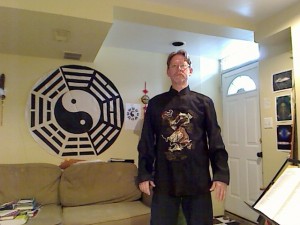 In standing meditation the body is always part of the experience and may promote natural body awareness. It may be the ultimate joining of the body and mind in a natural practice that can be as simple or profound as one wishes. The student does not try to do anything with qi we simply become aware of the quality of the qi, where it is blocked or whether it is clear, turbid. smooth or coarse. Internally the qi and breath are moving of their own accord. It could be that we are really learning some the four virtues of being human that are the foundation of any qigong practice. How to sit, stand, lie down and walk, unifying the body and mind savoring what it is to be human.

Standing Meditation has been called “The Million Dollar Secret” by some. It is as hidden as the air, deeply infused with beauty. Mysterious and tranquil, a jewel in the crown of all qigong practice. We are allowed to bring back wholeness and rediscover lost parts of the body mind continuum joining body, mind and soul. In standing we learn to get rid of energetic blockages to our potential to be human.

Most ancient cultures had a type of standing practice. It is believed to have developed out of the need for hunters to remain perfectly still for long periods of time in the search for prey which led to an awareness of being in tune with nature and the ability to self heal. They discovered a science and psychology of posture. A lot of this has been documented and researched by Felicitas Goodman Phd. a retired  professor of anthropology and linguistics at Dennison University. She has extensively tested some of these postures depicted on cave walls in Lascaux and in African petroglyphs on thousands of students noting their experiences “we found that each posture predictably mediated not just any kind of vision, but a characteristic, distinctly different experience”

Moshe Feldenkrais in his system Awareness Through Movement has also recognized consciousness related aspects of posture. In most of the great religions of the world from Buddhism toJewish davening to Christianity and Hinduism through the Yoga asanas, postures of prayer are a common aspect. These posture are said to have powerful spiritual benefit.

In china Standing has almost been made into an exact science. Healing aspects and martial applications have been handed down from teacher to student for millenia. In any discussion of Standing Practice one must always mention the established Master Wang Xiang-zhai (1885-1963) who was a Master at all three aspects of Qigong, healing, martial application, and meditation. He believed that Standing had a number of benefits “cure anemia, normalize blood pressure, and make the heart-beat calm and regular.” He said , “In movement, be like the dragon and tiger. In stillness have the mind of the Buddha.” to him the secret of standing was “emptiness” (kong). Emptiness leads to awareness where one can sense blockages and the flow of qi and also realize the nature of the cosmos. “After forty years of experience, I have learned that all true strength arises from a primordial, selfless void, and that this void can be gradually comprehended by paying attention to the small, subtle movements of the body” 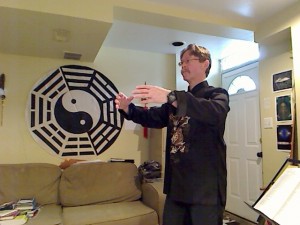 Most students pass through several stages in their practice of standing. Usually the first is a stage of discomfort where everything seems to ache, accompanied by trembling or shaking in the joints. This usually results from weakness in the muscles and tendons perhaps from atrophy. The body is definitely adapting to a greater charge of internal energy. We should just feel this  and after a few minutes return to the posture of rest, Wuji. The second level could be called the “Test of Fire”. Energetic knots have been released how to stand and breath become automatic, formerly depleted places are now full of energy. the hands and feet may become warm. the forehead may sweat and the abdomen fells hot. This is a transitory state and can last from a few days to months. The most difficult level is the level of patient growth. This the level where most people become bored and do not preserver and the stage where most benefit is gained if one can persevere. As Wang has told his students “The ordinary is the extraordinary.” We can now focus on the positive ,breathing, feeling and awareness.

Timothy Booth has been practicing Qigong for over 15 yrs. and is a member of the National Qigong Association. He currently instructs private and group Qigong classes in Toronto. He has studied with some of the greatest western Masters of Qigong such as Ken Cohen, and Eric Reynolds, direct student of Dr. John Painter. 1998 Certificate of Attainment- Senior Level in Baguazhang-from Emerge Internal Arts Tai Chi and Meditation Centre Student of Jiulong Baguazhang (Martial Art related to Tai Chi) 1999-2011 with Eric Reynolds and Jan Carstoniu MD, FRCPC ‚Äì Instructors of Jiulong Baguazhang. He can be reached through his blog at http://integral96.wordpress.com