“Researchers peering into the brains of those engaged in several tasks at once are concluding what some overworked Americans had begun to suspect: that multi-tasking, which many have embraced as the key to success, is instead a formula for shoddy work, mismanaged time, rote solutions, stress and forgetfulness, not to mention car crashes, kitchen fires, forgotten children, near misses in the skies and other dangers of inattention.” LA Times 2004

We live a world where it is not uncommon to be talking on the phone, while checking emails, having a conversation on Skype, cooking dinner and trying to take care of the kids all at the same time! But this, unfortunately, is not something that is very natural for our brains to handle. This ability we have of multitasking arises from the pre-frontal cortex of our brain, which is found in the more recent neo-cortex.

“When a human is assessing tasks, prioritizing them and assigning mental resources, these frontal lobes are doing most of the work, says Dr. Jordan Grafman, a neuropsychologist and chief of the National Institute of Neurological Disorders and Stroke at the National Institutes of Health.”“Grafman says, that the prefrontal cortex is the part of the human brain that is most damaged as a result of prolonged stress, particularly the kind of stress that makes a person feel out-of-control and helpless. The kind of stress, say, that you might feel when overwhelmed by the demands of multi-tasking.” “Such stress, Grafman says, also will cause the death of brain cells in another region — the hippocampus, which is critical to the formation of new memories. Damage there can impair a person’s ability to learn and retain new facts and skills.” “Multi-tasking, almost by its very nature of course, creates stress,” Grafman says. And long-term stress, in turn, is likely to make us less able to multi-task, he says. It’s a humbling lesson in the limits we face, he acknowledges. “If you’re multi- tasking, and it’s very stressful,” Grafman says, “you’re not going to get better at it.”, LA Times 2004.

Psychologist Marcel Just at the Carnegie Mellon University has extensively studied multitasking. He states that your brain is a marvel at multitasking and many things that happen simultaneously, such as breathing, your heartbeat and digestion would not be possible without this amazing power of your brain.

Unfortunately, this amazing power is not true of your conscious mind and is perhaps due to its tiny, limited processing power compared to your mighty subconscious mind. When your brain engages in several tasks that require conscious attention it “discounts” the attention applied to each by spreading its processing power across each of the tasks…that spells bad news for your productivity! It has been shown in many experiments that people who multitask have bouts of forgetfulness and reduced short-term memory

“Complaints of forgetfulness among women in their 40s and 50s are so prevalent that Peter M. Meyer, a biostatistician at Chicago’s Rush University Medical Center, in the late 1990s conducted a study intended to gauge how deeply the hormone changes of menopause disrupt women’s memory.” “Instead, he got a lesson on women and multi-tasking. The tests of short-term memory and verbal memory consistently showed that women of this age, though they complained of forgetfulness, were not missing a step.” “Their forgetfulness appeared to be a function of depression, stress and “role overload” — the multi-tasking of many roles at once — Meyer concluded.” LA Times, 2004

Gary Small, a neuroscientist and author of the book iBrain, warns that children who spend their formative years multitasking lose out on chances to focus on developing crucial, but slow-forming, interpersonal skills.

“With the weakening of the brain’s neural circuitry, controlling human contact, our social interactions may become awkward and we tend to misinterpret – and even miss – subtle, non-verbal messages,” he says.

Multi-tasking denies us essential pauses in our mental space.

“We need this time to develop our inner resources and grow neural connections in the cortex humanitatis – the part of brain that makes us civilized creatures”, says Daniel Siegel, associate clinical professor of psychiatry at UCLA Medical School in America. 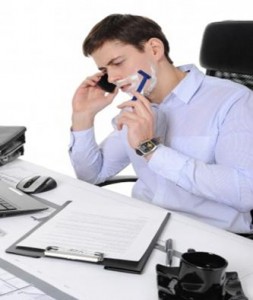 “Trying to learn while doing something else, such as doing homework while watching TV, sends information to an inappropriate part of the brain”, explains Professor Russell Poldrack, a psychologist at the University of California. “Using brain-scans, he has found if we multitask while studying, the information goes into the striatum, a region of the brain involved in learning new skills, from where it is difficult to retrieve facts and ideas. If we are not distracted, it heads to the hippocampus, a region involved in storing and recalling information.” “There is a cost to the way that our society is changing. Humans are not built to work this way”, Professor Poldrack, University Of California says. “We’re really built to focus.”

I feel a big factor that played in getting my own stress-related disorder is the crazy multitasking I had to do at work. As a pharmacist, not only do we have to label, dispense and check prescriptions, but we also have to manage the store and the staff, answer the telephone and perform patient consultations-all at the same time! I am sure many people can relate to my own scenario. I feel this modern day multitasking has been allowed to get out of hand for way too long.

What Is The Solution?

The first, most important thing to understand is we are just not designed to be conscious multitaskers. Whether we like it, all multitasking, if not correctly managed, will lead to chronic stress. Your conscious mind loves being able to focus on one thing at a time. If you try to do eight different things at once, it will take you eight times as long to complete any of those tasks! In fact, this ability of narrow focus is what all the great geniuses shared.

David Shenk is the author of the famous book, The Genius in All of Us: Why Everything You’ve Been Told About Genetics, Talent, and IQ Is Wrong. Shenk argues we have before us not a “talent scarcity,” but a “latent talent abundance.” Shenk states “the vast majority of us have not even come close to tapping what scientists call our ‘un­actualized potential.’ ”

Shenk reveals science is revealing the attainment of “genius” to be the product of highly concentrated effort.

Shenk also cites some of history’s great achievers — Ted Williams and Michael Jordan, Mozart and Beethoven — as examples of individuals who worked hard, day and night, to master their chosen fields.

Malcolm Gladwell also seems to agree, at least in part, with this notion. In his recent work, Outliers, Gladwell looked at people who rose above the rest and achieved incredible success in their respective endeavors.

An interesting point Gladwell makes is all people successful in their respective fields all have one thing in common: they have spent at least 10,000 hours learning, internalizing and perfecting their crafts. That applies to all the top artists, musicians, writers and IT leaders. They all spent at least 10,000 hours or more doing what they do. That’s at least a solid five years or more of dedicated work.

Unfortunately, multitasking is something very difficult to avoid in our hectic, modern lives.  However, it can be safely managed, so its damage to your health and productivity is minimized.

Here are some golden rules to help you manage your multitasking better:

In Buddhism, your conscious mind has also been referred to as the “Monkey Mind.”

The monkey mind jumps from thought to thought like a monkey jumps from tree to tree. Rather than existing in the present moment, the monkey mind focuses on one thought after another; these thoughts distract us from existing in the present. Meditation helps to allow the mind to come to a point of attaining single focus. The Alpha Mind System is designed to help you maximize your productivity by helping you recharge, refuel and focus your conscious mind!

To find out about the full Alpha Mind System and to download a full 79 page eBook based on the self healing experience of the Alpha Mind System founder, Niraj Naik visit this site http://www.AlphaMindSystem.com This system will show you a simple method for learning how to meditate easily helping you to skyrocket your productivity!

[Niraj Naik, M.Pharm., is a pharmacist and health and wellness consultant to several businesses based in the UK. Having a musical background he has focused his attention on using sound and music as a “side effect” free tool for relieving stress, depression and tension, that he believes are the main culprits for chronic disease. Niraj Naik also runs two successful websites and produces music and sounds with consultant psychiatrist Dr. Mrigank Mishra, under the alias amAya, some of which is infused with their novel Trypnaural Brainwave Entrainment Technology designed to increase the natural production of tryptamines, DMT, serotonin and melatonin that can lead to deeper sleep, relaxation and better health.]
Do you like this? Please share it:
Tweet