In qigong practice, it is important to challenge oneself to open the hands properly. In this article, we set out to speak of how to begin a conscious development of our hands. Humans continually evolve through conscious programs of development as we certainly do in Qigong and Tai Chi. 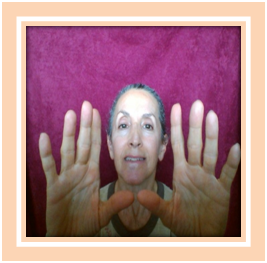 Throughout the ages all over the world, medicine keepers or shamans of tribes would diagnose the personalities, as well as the physical condition, of people via the way they held their hands and other hand characteristics. For example, palm readers can observe that a shy personality or a person who does not care to reveal their personality will go so far as to actually clench inwardly their fingers into the palms. In contrast, a more open personality often is seen to spread apart the fingers as if they are setting out to grab something.  The latter type will sometimes, in excess, push the wrist forward or hyper-extend the hand and/or individual fingers back and away from what they are pushing toward. That little extra push winds up weakening their intention. (People in everyday life who “try too hard” can trip themselves up; and in martial arts we call that ‘muscling.’)

Reading palms was something I had a natural interest in after only being told where the life line was located on the hand.  Later on, my clients would be impressed by the revelations of a perfect stranger who was reading only one line on their hand. It became clear that there must be some type of veracity to the ancient art. When I was 22, I was compelled to learn all the lines, shapes, pads, comparative finger lengths and the very manner in which people tended to hold their hands normally or in order to be read. These traits could influence an accurate reading, according to the people themselves who were read.

Becoming better at any art you practice is natural, so eventually being able to offer additional insights became easy. For dozens of years, my dance partner and I travelled all over the world and I amused people during that time with palm reading; eventually adding up to reading thousands of palms at various types of venues. But I have retired from that part of my career.  The important thing is that I trusted the ability to see typical traits that people have due to their type of hand.  As just one example, I used to read palms at convention parties, and I observed that 90% of engineers who were read had distinctively broad, thick fingered hands that were quite inflexible.  This observation is also well known amongst authors and other practitioners in this field. 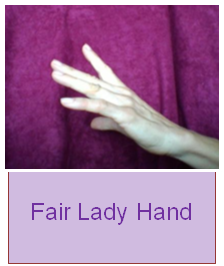 When I began teaching tai chi, it seemed evident that certain students had a more challenging time in assimilating the correction to open the hand in a specific configuration according to personality type. None of my teachers had, in specific words, ever suggested that such a standard of utilizing the gestalt of the opened-hand position greatly helped improve forms. So having learned from palm readings’ clues, I could see that a person needs to heal their repressions which, in turn, cause them to step back from certain areas in their life.  How effectively they can do that depends on the amount of practice with the right chi kung/qigong/neigong methods and focusing upon internal changes.

At a young age as a dancer, I thought myself to be comparatively slow at copying movement well. Years later, through the study of chi kung and tai chi/taiji, I would come to witness an improvement. I observed how many of my teachers were, in the below numbered ways, configuring their hands in the position to be discussed, while doing ward off, press, push, knife hands and more. It appeared that the more openly they used their hands powered by tendons, the more chi-filled was their form.  Many (but not all) of the teachers around the world, who I observed in classes, workshops and in photos, used one similar structuring that I copied and believe to be powerful:

1.  They open the space between their thumb and index fingers quite widely. My teacher, Mantak Chia, was the first person who showed me that portion of the hand and said it was named, “The Tiger Mouth.”

2.  The index finger is held up away from the other smaller fingers -lifting towards the back of the palm.

3.  Observing the rest of the hand one sees that the three small fingers are not greatly spread apart. A half-finger’s width apart is sufficient. It seems that lately more articles are asking students to become better at moving chi to a determined end by attending to this configuration of the entirety called the “Fair Lady hand.”

4.  An important observation maintained in the gestalt of “Fair Lady,” is its power gained by use of the “unbent wrist” that is regarded as the way to maintain strength throughout the hand and continuing into the arm, via the tendons. 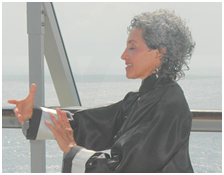 easier things first. That is an important lesson. If people never learn to open their hands, it is harder for them to advance. This applies toward much of what we do in life:  little by little. Consider that if we let our hand collapse, we lose strength that is connected down in the ground and through all our tendons of our feet on up to our ‘fair lady hands’ which express our chi power that can be projected out. Do become better ably aware of the varied strength in your hand because it will enforce your nature to its very core.  Simply practice imitating the proper position, for example, at a break from any work where you might require a rest.  Stand up, connect to the earth and place your hands in imitation of the photos below: