What Is American Daoism? 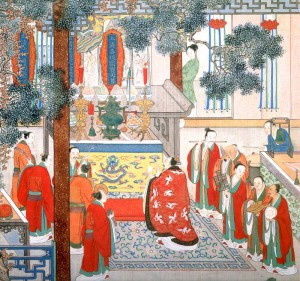 I have been researching American Daoism off and on for the past twelve years, and I have come to define it as a series of related practices and values that may have some connection to the Daoist tradition in China, but has less connection (and a different kind of connection) than claimed from within the movement itself.

Daoism, more so even than most Asian religions, was imported to the West as a series of ideas. In the late nineteenth century the new field of Sinology, which developed concurrently with the “science of religion,” valued the classical traditions of China, found in ancient texts, while despising its modern manifestations.

Twentieth-century scholars, while bringing to light new information on Chinese religions, in particular Daoism, helped to construct a romantic picture of Daoism that might cure the illnesses of the modern West. Popular writers took this idea further, seeing Daoism as a degenerated perennial philosophy that could be conserved in the West and restored to its original purity.

Paul Carus and the future Zen exponent D.T Suzuki published the first American translation of the Dao-de-jing in 1898. But it would not be the last: by 1950, there were ten in print. And in the last thirty years new English translations appear in bookstores with great regularity. The values the Dao-de-jing seems to advocate include many that coincide with the counterculture: spontaneity, naturalness, quietude, and concern for the environment.

The Dao-de-jing’s fascination for Westerners, as well as its status as the second most translated text in the world (after the Bible), can be attributed to its brevity, its lack of proper names, and especially its multiplicity of possible meanings. These traits continue to make the Dao-de-jing central to American Daoism. I have found that it remains the single greatest influence on North Americans who self-identify as Daoist.

Another subject of scholarly interest was investigations into longevity practices and Chinese alchemy. The ideas advanced by scholars about Daoist conceptions health, longevity, immortality, and transcendence appealed to the West’s growing need for body-centered spirituality. Popular scholarship argued that China had a “healthier” attitude toward sex while titillating readers with hints of an “exotic” sexuality. Thus, the language of transformation and cultivation found their way into the popular discourse.

By the early 1960s this discourse had found a home in the Human Potential movement, a generic name for a gamut of therapeutic techniques based on self-transformation, and indeed American Daoism, more than any other Asian tradition in the West, is historically and conceptually linked to that movement. Esalen, the famed retreat center on the California coast, is often given credit for birthing the Human Potential movement. Taiji was taught at Esalen, from its beginning, by Gia-Fu Feng and others.

The 1970s saw the birth and growth of exclusively American Daoist organizations, led by Chinese masters. This development was due mainly to the 1965 changes in the immigration laws of the United States and Canada, which brought more Chinese to North America. Since the 1960s, the Chinese population of the United States has been doubling every decade and by the mid-2000s was hovering around three and a half million. This growth had several effects on the consumption of Chinese religion in the West. First, with so many Chinese living in North America, Chinese culture—from martial arts to eating with chopsticks—no longer seemed so exotic as it did in the 1940s through the early 1970s. Second, a handful of these immigrants were experienced in various Chinese religio-physical techniques and eager to teach these skills to willing Americans. At approximately the same time, young North Americans’ search for spirituality outside traditional institutions (often called “the new religious consciousness”) led them to embrace teachers and practices from Asia. Thus, the situation was ripe for the creation of American Daoist masters and organizations. 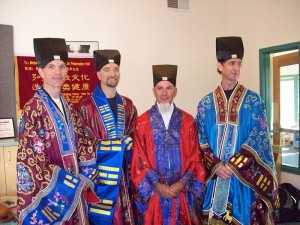 The first American Daoist organization officially recognized, as a tax-exempt religious institution in the U.S. was the Taoist Sanctuary, founded in North Hollywood, California in 1970. However the founder of the Sanctuary was not Chinese—though he often played one on TV (most famously as the Red Chinese agent Wo Fat on “Hawaii 5-0”). Khigh Dhiegh was of Anglo-Egyptian descent and was born Kenneth Dickerson in New Jersey. Nonetheless, his Sanctuary was the first comprehensive Daoist organization in America, teaching taiji, martial arts, the Dao-de-jing and the Yijing, and conducting seasonal Daoist rituals (albeit invented by Dhiegh himself). Dhiegh brought to the Sanctuary teachers who were from China, including one who had been trained at Daoist mountaintop monastery in Guangdong, China. The Taoist Sanctuary moved to San Diego, under the direction of Bill Helm, a former student of Dhiegh’s.

Another notable early American Daoist Master was Hua-Ching Ni. In 1976, three students of the Taoist Sanctuary, studying Chinese medicine in Taiwan, met a Chinese doctor who they invited to the United States. Hua-Ching Ni settled in Malibu, California and opened a shrine called the Eternal Breath of Tao and began teaching classes privately in a venue he named the College of Tao. Over the years, Ni-sponsored organizations have multiplied. His private acupuncture clinic was known as the Union of Tao and Man. He also founded Yo San University of Traditional Chinese Medicine in 1989, an accredited degree-granting college. His sons, Maoshing and Daoshing, now head both the clinic and the university while Master Ni lives in semi-seclusion in China.

Two more notable pioneers of American Daoism are Mantak Chia and Moy Lin-Shin. Chia, a Thai-born Chinese, was educated in Hong Kong, both formally and in Daoist techniques. He moved to New York City in 1979 and opened the Taoist Esoteric Yoga Center later renamed the Healing Tao Center. Today, Chia attracts an international clientele to his Tao Garden in Thailand, while the Healing Tao USA is headed by Chia’s former student, Michael Winn. Chia’s classes and books are best described as a popularized, streamlined system of qigong based on Chinese internal alchemy (neidan).

Moy Lin-Shin founded the Taoist Tai Chi Society (TTCS) in 1970 in Toronto. This is perhaps the largest Daoist group in the Western Hemisphere, though largely unknown within the American Daoist community, in part because it is based in Canada, a country that the United States often knows little about. The Taoist Tai Chi Society teaches “Taoist Tai Chi” a modified form of yang style taijiquan and has taught thousands of classes in over four hundred locations on four continents. It claims to have some 10,000 dues paying members worldwide. The Taoist Tai Chi Society’s religious arm is Fung Loy Kok Temple (FLK), dedicated in 1981. The original temple was located upstairs from the taiji studio. Most Taoist Tai Chi studios around the world dedicate at least a corner of their space to a small shrine.

Thanks to Ni, Chia, Moy and others like them, Daoism in America is no longer best understood as an ancient, mystical philosophy to be studied academically but as an individual regime of practice. Today there are many more Daoist institutions, some founded by American teachers who may have trained in China, or by recent immigrants from mainland China (a contrast to the earlier generation, who came to American via Taiwan or Hong Kong).  American Daoist groups all teach practices through a combination of weekly classes and yearly, or seasonal, retreats or seminars. What all these practices have in common is they can be performed individually, not collectively, as a modular part of a daily regimen. This may well be inevitable in the American context.

Each practice has been radically re-contextualized in North America: the Dao-de-jing and the Yijing entered the American scene through the field of Sinology, which never imagined these texts would be construed as modern practice. Once taiji was in common circulation in the early 1970s and linked to the philosophy of the Dao-de-jing and the Yijing, spiritual practice groups could offer courses in the study of these two texts as well as in taiji, linking them by a common vocabulary (qi, yin-yang). This is exactly what the Taoist Sanctuary did in 1970, which set the stage for the current group of contemporary North American Daoist institution.

It  is almost impossible to estimate the number of Daoists in the United States and Canada, as it is not a formal membership religion for most Chinese immigrants, nor for non-Chinese adherents. My best guess would be in the tens of thousands, but millions more have been influenced by Daoism.

Elijah Siegler is an associate professor of Religious Studies at the College of Charleston in South Carolina, where teaches courses on new religious movements, religion in popular culture, religions of China and Japan, American religious history and many others. He is currently completing two books, one on the history and practice of Daoism in America, the other, co-written with David Palmer, on the relationships between American Daoist practitioners, American scholars of Daoism and Daoist monks in China. He would be happy to receive any suggestions, stories, insights or criticism that might help make his work more accurate and comprehensive. His email is sieglere@cofc.edu
Do you like this? Please share it:
Tweet

This entry was posted in Featured Article and tagged American, daoism, Elijah Siegler. Bookmark the permalink.