If you’ve traveled to China, you’ve likely encountered senior citizens flapping their arms early in the morning in public parks, or perhaps squatting, walking, singing or dancing in groups, twisting waists and wiggling hips and watching their own hands while performing repetitive movements. Most likely, these folks were engaging in their morning qigong. Ranging from simple to quite complex, this popular mind/body exercise represents a uniquely Chinese method of uniting good intentions with specific results. Because it is more accessible and less challenging than practices like tai chi or yoga—and takes far less time to learn—it is growing in popularity among New Agers, the alternative medicine crowd, and just about anyone whose mind is more open than their wallet when it comes to taking good care of themselves.

The word qigong (pronounce it chee gung) is a composite of two Chinese characters, the first meaning energy (qi) and the second meaning work (gong). Transliteration from Chinese to English presents certain difficulties, but the word gong in this context is the same as the word kung in kung fu, which connotes the sort of Chinese martial arts associated with movie star Bruce Lee, but literally means hard work. Qigong thus evokes working on the body’s energy system using movement, breath, mind, and sound.

Qigong can be directed at developing esoteric powers and martial prowess, yet practitioners more commonly employ it to enhance and maintain their health. That likely accounts for the proliferation of qigong courses at local parks, YMCAs, senior centers, and yoga schools. Speaking of yoga schools, qigong’s surge in popularity has even led some writers to predict it will outstrip the Indian art within the next ten years.

While qigong is a relatively modern term, there have been different names for it across the ages. To this day there is still a great deal of discussion, if not debate, about what exactly constitutes the practice. What we can say is that there are references to it in one of the earliest of the Chinese classics, the Yijing (also I-Ching, or Book of Changes), and also in many other historical texts. The movements stem from Traditional Chinese Medicine (TCM) and are thus allied with acupuncture and herbal medicine. Typically, both movement and vibration (sound) are applied to acupuncture meridians, the pathways down which vital energy (qi) flows like water through a garden sprinkler hose. In China today, there are literally thousands of variations (they’re called “styles”) of qigong, many named for a person or family that invented them, some named after animals.

The best way to learn qigong is from a qualified teacher. As it is in many things, as the practice becomes more popular, the percentage of such qualified individuals among those offering instruction is likely to decrease. Since everyone learns it best directly from someone else who knows it, the best assurance of a teacher’s qualifications are the qualifications of their teacher. Ask about a prospective instructor’s lineage. Traditionally, qualified qigong teachers (just like qualified martial arts instructors) are eager to share this information; beware the teacher who is not, and be sure and ask students if they are experiencing positive health benefits from the practice. 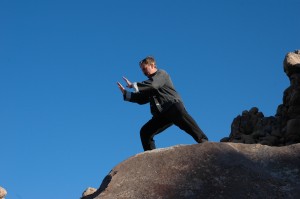 In the absence of a local class, there are a wide number of offerings on DVDs, some of which are fairly easy to follow at home:

Despite the number of instructional titles available, however, books don’t offer the easiest way to learn qigong.  Even so, reading about qigong can greatly enhance your understanding of how and why the practice works, and also give you background information that may lead you to try different approaches and styles. A particular volume that stands head-and-shoulders above the rest is Chinese Medical Qigong.

Presented much like a Western medical textbook, this surprisingly readable 651-page volume paints a detailed picture of qigong by beginning with general background, history, and theory, then proceeding through a book-length section each on practical methods, clinical applications, and qigong in ancient literature. It is a critical addition to any serious qigong library.

In the face of burgeoning healthcare costs, qigong represents a practical option to keeping the doctor away, and digesting your daily apple better too. While it may not stop a heart attack in mid-beat or clear asthmatic lungs as quickly as an emergency room visit, qigong does appear to support the health of your kidneys, liver, eyes, ears, and yes, lungs and heart too. It can even improve your sex life. Experts in the field remind us that the human body is built to move, and claim qigong to be effective in alleviating the symptoms of a number of chronic conditions. Does this mean qigong is for you? If the idea of goal-directed exercise sounds interesting and you are eager to take control of your own health rather than relegating that responsibility to others, qigong may be just what the doctor ordered.

Arthur Rosenfeld – is an authority on the spiritual dimensions of Eastern thinking for a Western world.  He began his formal martial arts training in 1980 and has studied deeply in China and the U.S. A Yale graduate, he has his needle in the vein of Chinese tai chi grandmasters, and is dedicated to personal transformation and social change through the application of Taoist philosophy and movement. The host of the national PBS show Longevity Tai Chi with Arthur Rosenfeld, he contributes to many national magazines. He blogs on The Huffington Post and his offerings also appear in The Wall Street Journal and numerous other websites and newspapers nationwide.  Rosenfeld has penned 11 critically acclaimed books, several of which he has optioned to Hollywood. For more info, go to: http://www.arthurrosenfeld.com