“If there’s too much heat, cool it.

If there’s too much cold, heat it.

If there’s too much fullness, empty it.

If there’s too much emptiness, fill it.”

In the West, we tend to view food mechanistically through the lens of protein, fat, carbohydrate, and vitamin content. In the Eastern tradition, however, people tend to focus on more holistic properties.

Among these, a food’s “temperature” is one of the most important. As we describe in our book, Ancient Wisdom, Modern Kitchen: Recipes from the East for Health, Healing, and Long Life by Yuan Wang, L.Ac., Warren Sheir, L.Ac., and Mika Ono (Da Capo Lifelong Books, 2010), temperature can help guide the selection of the best foods to eat (and to avoid) for each individual according to his/her unique constitution, condition, and environment.

As in the West, the Eastern concept of temperature includes the physical temperature of the food—piping hot or ice cold. In the East, however, temperature also refers to a food’s thermal effects on the body, say increasing metabolism until you break a sweat or cooling until you feel the tingle of chills.

Even for those unaccustomed to thinking in these terms, whether a food is classified as hot, warm, neutral, cool, or cold can be surprisingly intuitive. Warming foods include ginger, chili peppers, cinnamon, turmeric, nutmeg, green onions, and walnuts. Cooling foods and herbs encompass peppermint, citrus, tofu, milk, lettuce, celery, cucumber, and tomato. Neutral foods include rice and many types of grains.

Cooking methods can also affect the dish. In Asia, blanching, steaming, pickling, and boiling are understood to have a cooling influence, while grilling, frying, roasting, smoking, searing, simmering, and cooking with alcohol are thought to make a dish more warming.

With this in mind, you can ask yourself how best to restore balance between yourself and your environment. Do you run hot, rarely needing a sweater and generally feeling energetic and active? Then cooling foods, like a chilled cucumber salad, would often be a good choice for you. Or do you run cold, with a propensity toward fatigue? If so, warming foods, such as a steaming bowl of ginger soup, could be called for.  Is it winter on a freezing cold day? Perhaps a warming dish such as a spicy stir-fry with lamb would maximize your wellbeing. Is it a hot, sweaty day in the middle of summer? Perhaps a nice slice of watermelon would provide some welcome relief.

Curry is a blend of spices, usually containing turmeric, coriander, cumin, and fenugreek, and sometimes also containing ingredients such as ginger, garlic, fennel seed, cinnamon, clove, mustard seed, cardamom, mace, nutmeg, and various types of pepper. Many of the ingredients in curries are considered warming in the East Asian and South Asian traditions, making them a good match for anyone who tends to run cold or for eating when the weather starts to turn chilly. Here, these warming spices are enhanced in a bowl of steaming soup. 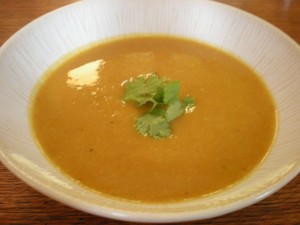 10 to 12 ounces pumpkin or winter squash, such as the Japanese kabocha (about 2 cups when cubed)

2 tablespoons vegetable oil, such as canola or olive oil

1.         Chop the pumpkin pieces into 1-inch cubes, seeded and peeled. (Some pumpkins are quite tough, and are most easily handled by chopping the pumpkin into two, seeding it, then cutting it into wedges before peeling. A large, sharp cleaver can be helpful with this task. The seeds can be reserved for roasting.)

2.        Place the pumpkin cubes and stock in a pot. Bring to a boil, then turn down the heat to low and simmer for about 20 minutes.

3.       Heat the oil in a skillet over medium-high heat. Add the onion and curry powder. Cook until the onions are translucent and soft (about 5 minutes).

4.         When both the onions and pumpkin are done, combine them in a blender or food processor. Whir into a smooth puree. You can also use a hand blender or immersion blender for this task.

This salad is good for eating in hot weather or serving to anyone who tends to run warm. In the language of traditional Chinese medicine, this dish helps to counteract Summer Heat. In Korea, a similar dish takes the form of a refreshing chilled soup for the summer months. 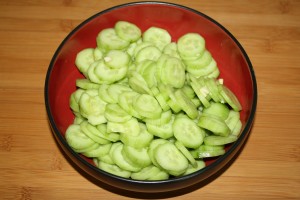 1 clove garlic, crushed and then minced

1.         Using a blunt instrument, such as the handle of a knife, pound the cucumber’s surface to soften it slightly and increase its ability to absorb the salt and dressing. Cut the cucumber in half lengthwise. Scoop out the seeds with a spoon, if desired (less necessary for smaller cucumbers). Then cut the cucumber widthwise into thin slices or slivers.

[Dr.Yuan Wang, OMD – grew up in Sichuan Province, China, where she learned to cook by helping her mother and grandmother prepare meals for the extended family. Following her interest in traditional Chinese medicine and nutrition, Dr. Wang pursued a rigorous course of study and eventually became a lecturer, researcher, and physician-in-charge of several departments at the Chengdu Traditional Chinese Medicine Hospital. Now a member of the faculty at the Pacific College of Oriental Medicine in San Diego and practitioner at The Source Chinese Medical Clinic in Poway, California, Dr. Wang finds that food tends to be a neglected area in Western medicine. Both in the clinic and in the classroom, Dr. Wang hopes to raise awareness about the importance of food for health and healing.]

[Mika Ono – is a writer and editor who is fascinated by issues in health, science, and society. Mika, a graduate of Reed College and The Fletcher School of Law and Diplomacy at Tufts University, is an author of the book, Ancient Wisdom, Modern Kitchen: Recipes from the East for Health Healing and Long Life (Da Capo Lifelong Books, 2010). Currently director of communications for The Scripps Research Institute, her work has won awards from organizations including the International Book Awards, International Association of Business Communicators, the Communicator Awards, the Mercury Awards, and HOW Design.]